From Infogalactic: the planetary knowledge core
Jump to: navigation, search
This article is about village in Derbyshire. For other uses, see Castleton (disambiguation).

Castleton is a honeypot village in the High Peak district of Derbyshire, England. The village lies within the Peak District at the western end of the Hope Valley on the Peakshole Water, a tributary of the River Noe. The village is situated between the areas known as the Dark Peak (to the north) and the White Peak (to the south). Castleton's population was 649 according to the 2001 census. 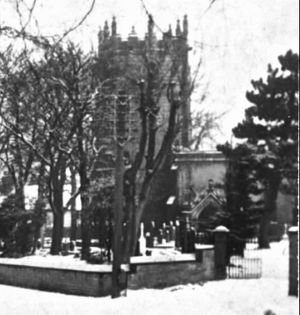 St Edmund's Church in a 1955 snowfall

A medieval leper hospital (the Hospital of Saint Mary in the Peak) is thought to have been on the eastern boundary of Castleton, though some locals believe it to have been just south of the Speedwell Cavern footpath from the village. Sheffield University archaeologists are investigating ‘Castle of the Peak’, which was reputedly founded by the wife of one of the William Peverels before 1153, and continued until about the 1543 Dissolution. They say the earliest documents referring to Spital Field are a grant and a Charter from the early 14th century. They are also investigating the 12th-century planned town at the foot of the castle hill.[3]

Castleton later prospered from lead mining; the Odin Mine, one of the oldest lead mines in the country, is situated 1.5 kilometres (0.9 mi) west of the village (see also Derbyshire lead mining history). This created and enlarged local caverns, four of which are now open to the public as Peak Cavern, Blue John Cavern, Speedwell Cavern and Treak Cliff Cavern. A small amount of Blue John is mined locally.

Since the 1920s the main mineral industry in the area has been cement. Hope Cement Works is closer to Hope, but its quarry is closer to Castleton.[4]

Castleton is situated between the gritstone plateau of the Dark Peak to the north and the gentler limestone scenery of the White Peak to the south. It lies at the western end of the Hope Valley and consequently is surrounded on three sides by hills. Most prominent is the ridge to the north. This is called Great Ridge; it runs east from Mam Tor to Back Tor and Lose Hill, via the pass (hause) of Hollins Cross, where paths from many directions converge and cross over to Edale.

Castleton used to be on the A625 road from Sheffield to Chapel-en-le-Frith, on the way to Manchester. Leaving Castleton, the western road used to go over Mam Tor, but after continual collapses and repairs (Mam Tor is called the "Shivering Mountain" because of its very loose shales) it was eventually abandoned.

The only westbound exit from Castleton is now the unclassified road over the narrow Winnats, now more frequently called "Winnats Pass". This road is very narrow and steep, and unsuitable for heavy vehicles or high volumes. Road signage has been designed to discourage through traffic—only local destinations are shown. Thus most traffic enters and leaves the village on the eastern (Hope-Hathersage-Sheffield) road; for traffic going west this involves a long diversion via the villages of Bradwell and Peak Forest.

There is no railway station, but Hope station is about 3 kilometres (1.9 mi) away, and train tickets to Hope and Edale are valid on connecting buses to Castleton.

Castleton attracts large numbers of tourists, and there are many pubs (some with accommodation), tea shops and guest houses to supply their needs. There is also a large car park, an information centre, several outdoors shops and a youth hostel. Many schools visit the area for educational studies such as GCSE fieldwork. It is also a major walking centre, where routes up Cave Dale, Winnats Pass, Mam Tor and Hollins Cross meet. There are four "show caves" to visit (one of them including an underground boat ride) and at least one of them is open all year. Castleton has a combined post office and general shop.

On Castleton Garland Day (Oak Apple Day – 29 May), a Garland King is paraded around the streets wearing an extremely large garland of flowers,[5] followed by local girls dressed in white with flowers. The village is also famous for its display of Christmas lights and decorations during the festive season.

Castleton is popular with walkers: there is plenty of accommodation, and there are many public footpaths leading from the village. There are easy walks along the river to Hope, Brough, Bamford and (rather further) Hathersage, and there is a short strenuous walk up onto the Great Ridge, where views can be enjoyed before descending to Edale or returning to Castleton. Hayfield is a short day's walk away beyond Rushup Edge. A two- or three-day trail, the Limestone Way, starts in Castleton and runs south down Cave Dale (past the rear of the castle) before climbing out of the village and heading for Monyash, Youlgreave, and Matlock.

The village was featured in episode 3 of Most Haunted: Midsummer Murders where the team "investigates" the 18th century murder of an engaged couple. Much of the "investigation" takes place in Speedwell Cavern. One of the conspirators, James Ashton, is said to have confessed to the murders on his deathbed after being haunted by the dead couple. He also implicated others involved. Castleton also featured in national news reports in the early 1980s following the murder of Susan Renhard near the battlements of Peveril Castle.

The local underground caves were used as the filming location for the underworld, ruled by the evil Lady of the Green Kirtle (played by Barbara Kellerman), in the 1990 BBC adaptation of The Silver Chair (one of the Narnia books written by C.S. Lewis).[7] Cave Dale features in the films The Princess Bride (1987) and The Other Boleyn Girl (2008).

The town is also featured briefly in the play The Devil is an Ass by Ben Jonson, first performed in 1616.