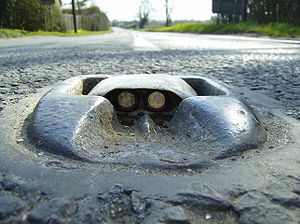 The reflective spheres shown set into a cat's eye in the United Kingdom. 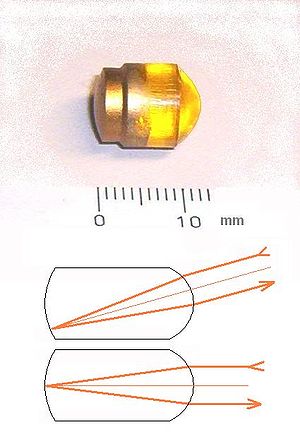 Cat's eye glass body and principle of operation; back face is mirror-coated 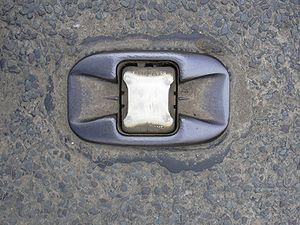 The cat's eye is a retroreflective safety device used in road marking and was the first of a range of raised pavement markers. It originated in the UK in 1933 and is today used all over the world. It consists (in its original form) of two pairs of reflective glass spheres set into a white rubber dome, mounted in a cast-iron housing. This is the kind that marks the centre of the road, with one pair of cat's eyes showing in each direction. A single-ended form has become widely used in other colours at road margins and as lane dividers. Cat's eyes are particularly valuable in fog and are largely resistant to damage from snow ploughs.

A key feature of the cat's eye is the flexible rubber dome which is occasionally deformed by the passage of traffic. A fixed rubber wiper cleans the surface of the reflectors as they sink below the surface of the road (the base tends to hold water after a shower of rain, making this process even more efficient). The rubber dome is protected from impact damage by metal 'kerbs' – which also give tactile and audible feedback for wandering drivers.

The inventor of cat's eyes was Percy Shaw of Boothtown, Halifax, West Yorkshire, England. When the tram-lines were removed in the nearby suburb of Ambler Thorn, he realised that he had been using the polished strips of steel to navigate at night.[1] The name "cat's eye" comes from Shaw's inspiration for the device: the eyeshine reflecting from the eyes of a cat. In 1934, he patented his invention (patent No. 436,290 and 457,536), and on 15 March 1935, founded Reflecting Roadstuds Limited in Halifax to manufacture the items.[2][3] The name Catseye is their trademark.[4] The reflective lens had been invented six years earlier for use in advertising signs by Richard Hollins Murray, an accountant from Herefordshire[5][6] and, as Shaw acknowledged, they had contributed to his idea.[1]

The blackouts of World War II (1939–1945) and the shuttered car headlights then in use demonstrated the value of Shaw's invention and helped popularise their mass use in the UK. After the war, they received firm backing from a Ministry of Transport committee led by James Callaghan and Sir Arthur Young. Eventually, their use spread all over the world.

These units are not very visible in daylight and are generally used in conjunction with traditionally painted lines. Temporary cat's eyes with just a reflective strip are often used during motorway repair work. These are typically day glow green/yellow so they are easily visible in daylight as well as in darkness, they can then be used on their own for lane division.

Also seen during motorway repair work are plastic traffic pillars that are inserted into the socket of a retractable cat's eye rather than being free-standing. These are often used in conjunction with two rows of the temporary cat's eyes to divide traffic moving in opposite directions during motorway roadworks.

Solar-powered cat's eyes known as solar road studs and showing a red or amber LED to traffic, have been introduced on roads regarded as particularly dangerous at locations throughout the world.[7][8] However, shortly after one such installation in Essex in the autumn of 2006 the BBC reported that the devices, which flash almost imperceptibly at 100 times a second, could possibly set off epileptic fits and the Highways Agency had suspended the programme.[9]

Flashing blue LED cat's eyes were demonstrated on the TV show Accident Black Spot, aired on Channel 4 on 19 December 2000, which alert the driver to potential ice on the road when a low enough temperature, provisionally set at 3°C (37°F), is reached. Proposed enhancements in 2013 were to change the standard white light to amber for four seconds after the passing of a vehicle, or red if the following vehicle is too close or traffic ahead is stationary.[10]

M9 motorway in Carlow, Ireland with cat's eyes on the road surface and retroreflectors on barriers

In Ireland yellow cat's eyes are used on all hard shoulders, including motorways (red cat's eyes are not used, neither are blue). In addition, standalone reflector batons are often used on the verge of Irish roads. Green cat's eyes are used to alert motorists to upcoming junctions. There are limited installations of actively powered cats eyes, which flash white light, on particularly dangerous sections of road such as the single carriageway sections of the N11.

Botts' dots (research started 1953, compulsory in California from 1966) and other raised carriageway markers perform a similar function in areas of the United States and New Zealand that receive little snowfall. In areas of the U.S. receiving substantial accumulating snowfall that requires the use of snow removal equipment, recessed markers or those encased in protective metal are frequently used.[11]

In the morning of 25 April 1999 on the M3 motorway in Hampshire, England, a van dislodged the steel body of a cat's eye which flew through the windscreen of a following car and hit a passenger (the drum and bass DJ known as Kemistry) in the face, killing her instantly. The coroner recorded a verdict of accidental death.[12] Investigators acknowledged that the cat's eye bodies occasionally came loose, but added that such an accident was previously unheard of.[13] A question was asked in the House of Lords about the safety of cat's eyes in light of the incident, and the Highways Agency conducted an investigation into the "long-term integrity and performance" of various types of road stud.[14]