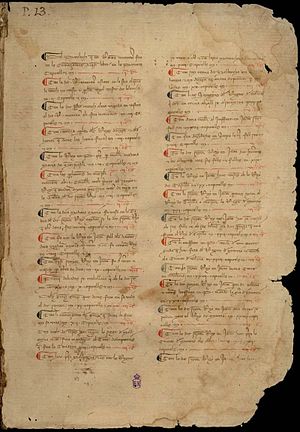 Manuscript of the Crònica of Ramon Muntaner

De Flor recruited soldiers left unemployed with the Peace of Caltabellotta in 1302 by the Crown of Aragon, who opposed the French dynasty of Anjou.

In 1303 de Flor offered the services of his Company to the Byzantine emperor Andronicus II Palaeologus and his son the Basileus Michael IX Palaeologus. The Orthodox Byzantine Empire was under threat by the Turks, who were invading Anatolia and established the mighty Sultanate of Rum, whose name expressed succeeding to the '[Eastern] Roman' empire.

Roger de Flor's offer was accepted by both Byzantium and by the Catalan, rulers in Sicily and southern Italy, who were quite eager to rid themselves of unemployed and unruly soldiers. Roger de Flor departed with 39 galleys and transports carrying around 1,500 knights and 4,000 Almogavars, special foot soldiers employed mainly serving the kingdom's interests in the Mediterranean Sea, especially from Catalonia.

Roger de Flor arrived in Constantinople with the help of king Frederick III of Sicily in 1303, and married the niece of Andronicus, daughter of the Tsar of Bulgaria, and was named Megas Doux ('Great Dux', i.e. head of the fleet). Roger de Flor campaigned with his Company in Anatolia, defeating the Turks but also engaging in widespread violence and looting of the Byzantine inhabitants. By this point, the Catalans, who had recruited nearly 3000 Turkic horse into their ranks, were considered by the Byzantines to be little better than brigands and freebooters. The successes had inflated the already arrogant De Flor, leading him to entertain plans of establishing his own dominion in Anatolia.

This put him at odds with the Byzantine Emperor, and the indiscipline of the Almogavars marked the end of Roger de Flor. On 30 April 1305, he was slain along with 300 cavalry and 1,000 infantry by the Alans, another group of foreign mercenaries at the service of the Emperor. Roger had been in Adrianopolis (modern Edirne) attending a banquet offered by Emperor Michael. The emperor later attacked Gallipoli attempting to conquer the city from the remnants of the Company under the command of Berenguer d'Entença who had arrived with 9 Catalan galleys. The attack was unsuccessful, but it largely decimated the Company. Berenguer d'Entença was captured by the Genoese shortly after, and later liberated. The Company had only 206 horsemen, 1,256 foot soldiers left and no clear leader when Emperor Michael attacked, trusting in his numerical superiority, only to be defeated in Battle of Apros in July 1305.

The Company proceeded to devastate the Balkanic regions of Thrace and Macedonia for the next two years, including an attack on Thessalonica by land and sea, and raids against the monasteries on Mount Athos. Until recently no Catalans were allowed on the Athos peninsula by the Athonite monks. However in the past few years and following the payment of reparations by the Catalan government this situation has changed. Harassed by the Byzantine army under the general Chandrenos, the Catalans eventually left Macedonia, and in spring 1309 invaded Thessaly.

The Company was a powerful asset in the political arena and Frederick III of Sicily tried to gain control over it. He assigned the Infante (royal prince) Ferdinand of Majorca to Gallipoli to become its Captain. However one of the leaders of the Company, Bernat de Rocafort, opposed this move, and faced Berenguer d'Entença, Ferran Ximenis d'Arenós, and others who had accepted the Infante. The struggle ended with the departure of both the Infante and Ferran, and with Bernat de Rocafort becoming leader of the Company.

The administrator, Ramon Muntaner also left and later wrote a chronicle about exploits of the Company.

Bernat de Rocafort offered the Company's services to Charles of Valois to strengthen his claim to the Byzantine Empire and whom the Count of Barcelona had expelled from Sicily before founding the Company in a dynastic war for the Crown of Aragon. In 1309, Charles of Valois' deputy Thibault de Chepoy ended the leadership of Rocafort, arresting him and sending him to Naples where he died of hunger the same year.

In 1310 Roger Deslaur then offered its service to Walter V of Brienne Duke of Athens and within a year it freed the duchy of its enemies, only to be betrayed by Brienne, who refused to pay for its services. The Company avenged itself, defeating and killing Brienne in the Battle of Halmyros on 15 March 1311, taking control of the duchy of Athens. Around this time, the Company also conquered the city of Thebes.

In 1318 the Company expanded its power into Thessaly, taking control of the Duchy of Neopatria.

The Catalan rule was to last until 1388–1390, when they were defeated by the Navarrese Company under Pedro de San Superano, Juan de Urtubia, and allied with the Florentines under Nerio I Acciaioli of Corinth. His descendants controlled them until 1456 when they were conquered by the Ottoman Empire. By that time, like many military enterprises, the Great Company had faded out of history.

The early history of the Catalan Company was chronicled by Ramon Muntaner, a former member of the company, in his Crònica.