It is the busiest airport in Sicily and the 6th busiest in Italy with 7.304.012 passengers in 2014.[2] Major airlines such as Alitalia, Lufthansa and Air Berlin offer services here and connect numerous European destinations such as Rome, Munich and Berlin, while low cost airlines such as easyJet and Ryanair offer extensive flights to many leisure destinations.

Catania Airport's history dates back to 1924, when it was the region's very first airport. During World War II it was seized by the Allies during the Sicily Campaign and used by the United States Army Air Forces as a military airfield. Twelfth Air Force used the airport as a combat airfield, stationing the 340th Bombardment Group, which flew B-25 Mitchells from 27 Aug to 19 Nov 1943. In addition, the HQ, 51st Troop Carrier Wing used the airport from 29 Sep 1943 to 29 Jun 1944. Various transport units used the airport for the rest of the war, afterward it was turned back over to civil authorities.[3]

By the late 1940s, it was clear that the airport was fast running out of space and it was deemed necessary to relocate and in 1950, the new bigger and improved Catania Airport opened for business.

After 20 years of unexpected growth and high passengers levels, in 1981 it was once again necessary to restructure the airport to cope with demand.

Development since the 2000s

In order to cope with the increasing passengers figures, a new terminal, equipped with 22 gates and 6 loading bridges, opened on 8 May 2007 replacing the old facilities. The current "investment programme" has ensured that Catania Fontanarossa Airport continues to look forward and plan for growth over the next ten years, implementing a whole new infrastructure and making many additions, including a panoramic restaurant, a new airside runway and further office space.

Ryanair started to fly to Catania in 2013 but announced only one route to Catania while also starting operations with 3 routes to Comiso Airport, a newly opened in 2013 airport located approximately 100 km from Catania, near the city of Ragusa.[4]

In August 2014, Air One announced the closure of its operations including the shutdown of its Catania base on 30 September 2014.[5] 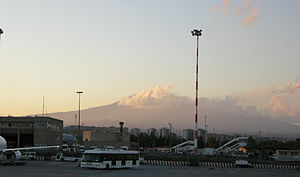 The airport's apron with the Etna volcano visible in the background

The airport is conveniently located close to the A19 motorway, which links Catania with Palermo and central Sicily, while the European route E45 runs to Syracuse in the south. Passengers can also take a taxi from the terminal building into the city or beyond, with popular locations including nearby Syracuse, Taormina, and the westerly resorts of Palermo and Marsala.

A shuttle bus service provides transport into Catania city centre and the Central Train Station, while scheduled bus services to other parts of the island are also available direct from the airport.