From Infogalactic: the planetary knowledge core
Jump to: navigation, search
"Caterer" redirects here. For the magazine, see The Caterer. For the surname, see Caterer (surname). 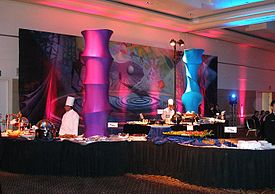 Catering is the business of providing food service at a remote site or a site such as a hotel, public house (pub), or other location. Catering has evolved to become an artisanal affair. Caterers now create an experience that involves the senses.

The earliest account of a major services being catered in the United States is a 1778 ball in Philadelphia catered by Caesar Cranshell to celebrate the departure of British General William Howe.[1] Catering business began to form around 1820, centering in Philadelphia.[1][2] Catering being a respectable and profitable business, the early catering industry was disproportionately founded by African-Americans.[1][2][3]

The industry began to professionalize under the reigns of Robert Bogle who is recognized as "the originator of catering."[2] By 1840, a second generation of Philadelphia black caterers formed, who began to combine their catering businesses with restaurants they owned.[2] Common usage of the word "caterer" came about in the 1880s at which point local directories began listing numerous caterers.[1] White businessmen eventually moved into the industry and by the 1930s, the black businesses had virtually disappeared.[1]

A mobile caterer serves food directly from a vehicle, cart or truck which is designed for the purpose. Mobile catering is common at outdoor events (such as concerts), workplaces, and downtown business districts.

An example of wedding catering

Merchant ships often carry Catering Officers - especially ferries, cruise liners and large cargo ships. In fact, the term "catering" was in use in the world of the merchant marine long before it became established as a land-bound business.