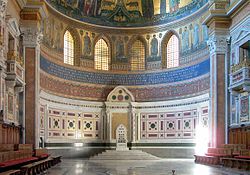 The cathedra of the Pope in the apse of St. John Lateran, the cathedral of Rome. 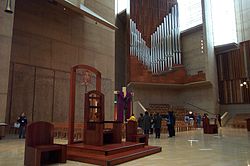 Modern cathedra at the Cathedral of Our Lady of the Angels in Los Angeles.

A cathedra (Latin, "chair", from Greek, καθέδρα kathédra, "seat") or bishop's throne is the seat of a bishop. It is a symbol of the bishop's teaching authority in the Catholic Church, the Orthodox Church, and in the Anglican Communion churches. Cathedra is the Latin word for a chair with armrests, and it appears in early Christian literature in the phrase "cathedrae apostolorum" indicating authority derived directly from the apostles;[1][2] its Roman connotations of authority reserved for the Emperor were later adopted by bishops after the 4th century.[citation needed] A church into which a bishop's official cathedra is installed is called a cathedral.

Joint International Commission for Theological Dialogue Between the Catholic Church and the Orthodox Church make use of the term cathedra to point the existence of bishop in each local Church, in the heart of ecclesial apostolicity.[3] 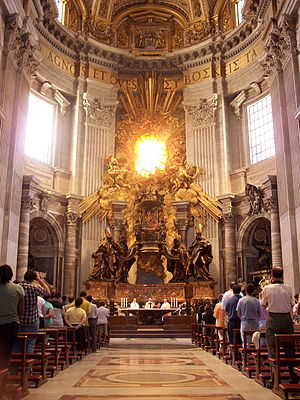 Bernini's oversized Cathedra Petri, "Chair of Peter", in St. Peter's Basilica,
Rome, above and behind the altar.

The definitive example of a cathedra is that encased within the Triumph of the cathedra Petri designed by Gian Lorenzo Bernini in 1657 and completed and installed in 1666. As early as the 8th century, an ancient wooden chair overlaid with ivory plaques depicting the Labors of Heracles and some of the constellations [1] was venerated as the episcopal chair of St. Peter. It is a Byzantine throne, made after St. Peter's time, with framed fragments of acacia wood encased in the oak carcass and reinforced with iron bands. Several rings facilitated its transportation during processions. Pope Alexander VII commissioned Bernini to build a monument to display this relic in a triumphant manner. Bernini's gilded bronze throne, richly ornamented with bas-reliefs, encloses the relic. On January 17, 1666 it was solemnly set above the altar of Saint Peter's Basilica in Vatican City. Greater than life-sized sculptures of four Doctors of the Church form an honor guard: St. Ambrose and St. Athanasius on the left, and St. John Chrysostom and St. Augustine on the right.

Celebrated on February 22 in accordance with the calendar of saints, the Feast of Cathedra Petri (the Feast of the Chair of Peter the Apostle) honors the founding of the church in Rome and gives thanks for the work of Saint Peter. 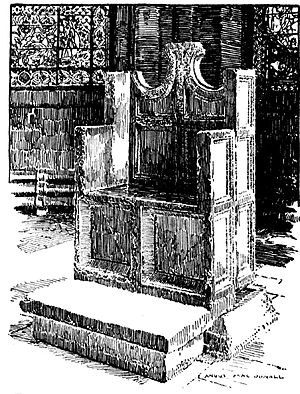 The Cathedra Augustini, the "Chair of St. Augustine", in Canterbury Cathedral.

The Chair of St. Augustine represents one of the most ancient extant cathedrae in use. Named after the first Archbishop of Canterbury, St. Augustine of Canterbury, it is made of Purbeck Marble or Bethesda marble and dates to sometime between the 6th and 12th centuries. Those who argue for an older date suggest that it may have been used to crown the kings of Kent. Canterbury Cathedral, in which the cathedra is housed, maintains that the chair was once part of the furnishings of the shrine of St. Thomas Becket, since dismantled [2]. Since antiquity, it is always used in the triple enthronement of an Archbishop of Canterbury. He is seated on the throne in the quire as Diocesan Bishop, in the chapter house as titular abbot, and in St. Augustine's chair as Primate of All England. This is the only occasion in which the cathedra is used. A second cathedra is used for other occasions at which the archbishop is present.

The term ex cathedra, meaning "from the throne", is used to designate official pronouncements of the pope intended for a world audience. As a throne or armchair symbolizes the power to teach, the cathedra in this case refers to the teaching authority over the whole church rather than to a chair. According to Catholic dogma, the pope's statements ex cathedra are infallible in matters of faith and morals. In Anglican episcopal governance, episcopal teaching is conditioned by synodical governance, and so bishops cannot be said to speak ex cathedra in this way (although they may jocularly be said to do so). 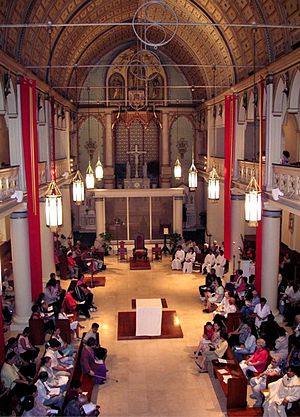 The cathedra of the Catholic Diocese of Honolulu behind the altar. 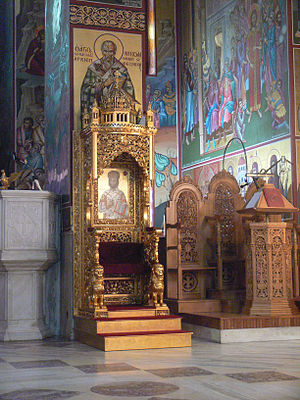 The Metropolitan bishop's cathedra at the Church of Saint Gregory Palamas, Thessalonika, following the Greek practice. 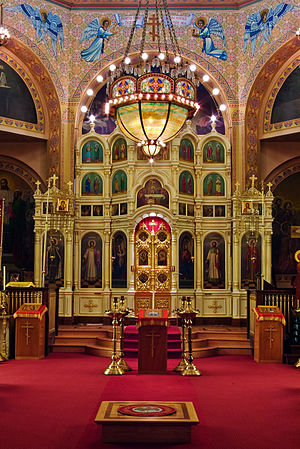 Russian kafedra in the center of the nave with its orlets.

The traditional position of the cathedra was in the apse, behind the high altar, which had been the position of the magistrate in the apse of the Roman basilica which provided the model type—and sometimes were adapted as the structures—for early Christian basilicas. In the Middle Ages, as altars came to be placed against the wall of the apse, the practice of placing the cathedra to one side (mostly left) became standard.

In the Roman Catholic Church since the Second Vatican Council, the altar is often free-standing, so that in cathedrals built or renovated after Vatican II, the cathedra is sometimes placed behind the altar, as in ancient Roman basilicas.

In Anglican practice, the cathedra tends to be placed to one side in the choir, although in more contemporary practice, it is commonly placed on the gospel side of the chancel (i.e., to the left of the altar, as one looks at it from the front). 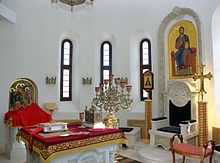 Inside the sanctuary of Saint Vladimir Skete (Valaam Monastery). To the right is the bishop's kathedra at the high place in white marble, with marble benches for the priests.

Eastern Orthodox and Byzantine Rite Catholic churches have a throne for the bishop in the apse behind the holy table, with seats for the priests (Greek: synthranon) arranged to either side. This location is referred to as the "high place" and represents the presence of Christ presiding over the services, even when the bishop is not present and therefore an icon of Christ is often placed above the bishop's throne. The bishop ascends to the high place only during the divine liturgy, at the Trisagion. For this reason, the consecration of a bishop takes place at the Trisagion, so that he may ascend to the high place for the first time as a bishop during the liturgy at which he is consecrated.

Another throne is provided for the bishop in the nave of the church: 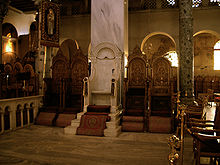 Tribunes, bishop's cathedra and stasidia at the basilica of Hagios Demetrios, Thessaloniki.

An orlets is usually placed at both the high place and the throne in the nave. An orlets is usually kept permanently on the Russian kafedra, even when the chair is removed; the orlets is, however, removed when a deacon stands on the kafedra to read the gospel.