Catherine of Austria, Queen of Portugal 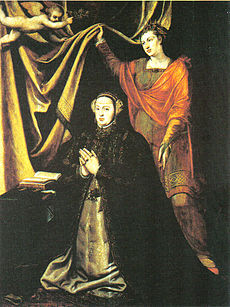 Altarpiece by Cristóvão Lopes in the Convent of Madre de Deus in Lisbon depicting Catherine of Austria with her namesake, St. Catherine of Alexandria. Currently on display in the National Museum of Ancient Art in Lisbon.

An Infanta of Castile and Archduchess of Austria, Catherine was the posthumous daughter of King Philip I by Queen Joanna of Castile.[1] Catherine was born in Torquemada and named in honor of her maternal aunt, Catherine of Aragon. She remained with her mentally unstable mother until her eldest siblings, Eleanor and the future Emperor Charles V, arrived at Spain, coming from Flanders.

All of her five older siblings, except Ferdinand, were born in the Low Countries and had been put into the care of their aunt Margaret of Austria, but Joanna kept hold of young Catherine. Catherine actually stayed with her mother during imprisonment at Tordesillas during her grandfather Ferdinand of Aragon's time as regent. When the time came for her to marry, Catherine was released from the custody that her mother was to endure until her death.

On 10 February 1525, Catherine married her first cousin, King John III of Portugal. They had nine children, but only two survived early childhood.

After the death of her husband in 1557, she was challenged by her daughter-in-law and niece, Joan of Austria, over the role of regent for her grandchild, the infant King Sebastian. Mediation by Charles V resolved the issue in favour of his sister Catherine over his daughter Joan, who was needed in Spain in the absence of Philip II.

Catherine has no descendants today, as both her grandchildren died childless. Her line of descent went extinct within six months of her death, as the only descendant of hers that survived her, King Sebastian of Portugal, died in August 1578.