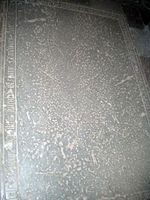 Catherine's grave at Vadstena
File:Catherine of Sweden (1448) grave drawing & family seal 1820 & 1879.jpg
The tomb of Catherine in Vadstena in a drawing from 1820 where the Gumsehuvud coat of arms has been superimposed later.

A daughter of the nobleman Karl Ormsson (Gumsehuvud), she was married to Regent (and then widower) Charles on 5 October 1438, when she became first lady and functioned as Queen in a ceremonial sense until 1440, when her husband was replaced as regent. Before their marriage, dispensation was obtained from the Pope, as Catherine was related to Charles's first wife. This was to ensure that children born in the marriage would be regarded as legitimate.

In 1448, her spouse became regent again and then was crowned King. She was crowned Queen of Sweden in Uppsala Cathedral on 2 July 1448. The next year, her husband became King of Norway also, making her Queen of Norway. The marriage is described as very happy and resulted in nine children. It was said that "Their relationship had always been of the best kind". Their second daughter, Magdalene, married Ivar Axelsson (Tott), an uncle of Ingeborg Tott.

Queen Catherine was described as beautiful and cheerful; she created a nice environment and a relaxed atmosphere at court, and she was forthcoming to those who came seeking audience.

In 1450, she became one of many who died of the plague in Stockholm, and was deeply mourned by the king. She was buried in 1451 in Vadstena Abbey.