Catherine of Valois (27 October 1401 – 3 January 1437[1]) was the Queen consort of England from 1420 until 1422. She was the descendant, consort, and ancestor of kings. A daughter of Charles VI of France, she married Henry V of England,[2] and gave birth to his heir Henry VI of England. Her liaison (and possible secret marriage) with Owen Tudor proved the springboard of that family's fortunes, eventually leading to their grandson's elevation as Henry VII of England.[3] Catherine's older sister Isabella was queen of England from 1396 until 1399, as the child bride of Richard II.

Catherine of Valois was the youngest daughter of King Charles VI of France and his wife Isabeau of Bavaria.[4] She was born at the Hôtel Saint-Pol (a royal palace in Paris) on 27 October 1401. Early on, there had been a discussion of marrying her to the prince of Wales, son of Henry IV of England, but the king died before negotiations could begin. In 1414, the prince, now Henry V, re-opened discussion of the match, along with a large dowry and acknowledgement of his right to the throne of France.

While some authors have maintained that Catherine was neglected as a child by her mother,[5] a more contemporary examination of the evidence suggests otherwise. According to the financial accounts of her mother, toys befitting for a French princess were purchased, religious texts were provided, and Catherine was sent to the convent in Poissy to receive a religious education.[6] 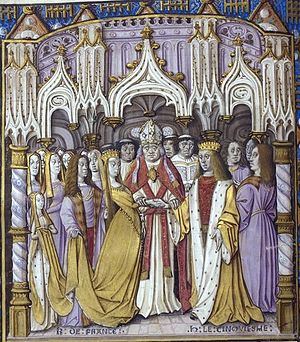 Henry V went to war with France, and even after the great English victory at Agincourt, plans for the marriage continued. Catherine was said to be very attractive and when Henry finally met her at Meulan, he became enamoured. In May 1420, a peace treaty was made between England and France, and Charles acknowledged Henry of England as his heir. Catherine and Henry were married at the Parish Church of St John or at Troyes Cathedral on 2 June 1420. Catherine went to England with her new husband and was crowned queen in Westminster Abbey on 23 February 1421. In June 1421, Henry returned to France to continue his military campaigns.

By this time, Catherine was several months pregnant and gave birth to a son named Henry on 6 December 1421 at Windsor. Her husband never saw their child. During the siege of Meaux, he became sick with dysentery and died on 31 August 1422, just before his 36th birthday. Catherine was not quite 21 and was left a queen dowager. Charles VI died a couple of months after Henry V, making the young Henry VI king of England and English-occupied northern France. Catherine doted on her son during his early childhood.

Catherine was still young and marriageable, a source of concern to her brother-in-law Humphrey, Duke of Gloucester, and Lord Protector. Rumours abounded that Catherine planned to marry Edmund Beaufort, Count of Mortain, her late husband's cousin. The Duke of Gloucester was strongly against the match, however, and the Parliament of 1427–8 passed a bill which set forth the provision that if the queen dowager remarried without the king's consent, her husband would forfeit his lands and possessions, although any children of the marriage would not suffer punishment. The king's consent was contingent upon his having attained his majority. At that time, the king was only six years old.

Catherine lived in the king's household, presumably so she could care for her young son, but the arrangement also enabled the councillors to watch over the queen dowager herself. Nevertheless, Catherine entered into a sexual relationship with Welshman Owen ap Maredudd ap Tudor, who, in 1421, in France, had been in the service of Henry V's steward Sir Walter Hungerford. Tudor was probably appointed keeper of Catherine's household or wardrobe. The relationship began when Catherine lived at Windsor Castle, and she became pregnant with their first child there. At some point, she stopped living in the King's household and in May 1432 Parliament granted Owen the rights of an Englishman. This was important because of Henry IV's laws limiting the rights of Welshmen. 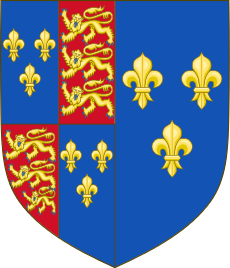 There is no clear evidence either way whether Catherine and Owen Tudor actually married. No documentation of such a marriage exists. Moreover, even if they had been married, the question exists if the marriage would have been lawful, given the Act of 1428. From the relationship of Owen Tudor and Queen Catherine descended the Tudor dynasty of England, starting with King Henry VII. Tudor historians asserted that Owen and Catherine had been married, for their lawful marriage would add respectability and stronger royal ties to the claims of the Tudor dynasty. Bertram Fields wrote "There was no proof of [the marriage] beyond Owen's word".[8]

Owen and Catherine had at least six children, Edmund, Jasper and Owen were all born away from court. They had one daughter, Margaret, who became a nun and died young.

Catherine died on 3 January 1437, shortly after childbirth, in London, and was buried in Westminster Abbey. While the death date is not in question the cause is, with an equal number of records stating that she did not die as a result of childbirth, but entered Bermondsey Abbey, possibly seeking a cure for an illness that had troubled her for some time. She made her will just three days before her death on 3 January 1437. She now rests at Westminster Abbey in Henry V's Chantry Chapel. After her death, Owen and Catherine's enemies decided to proceed against Owen for violating the law of the remarriage of the queen dowager. Owen appeared before the Council, acquitting himself of all charges and was released. On his way back to Wales, he was arrested and his possessions seized. He tried to escape from Newgate jail in early 1438 and eventually ended up at Windsor Castle in July of that year.

Meanwhile, Owen and Catherine's two older sons, Edmund and Jasper, went to live with Katherine de la Pole, Abbess of Barking and sister of William de la Pole, 1st Duke of Suffolk. Sometime after 1442, the king (their half-brother) took a role in their upbringing. Owen, their father, was eventually released on £2000 bail, but was pardoned in November 1439 (and the bail cancelled in 1440). Owen was treated well afterwards and was a member of the king's household until the mid-1450s. He lived until 1461, when he was executed by the Yorkists following the Battle of Mortimer's Cross in Herefordshire. Their sons were given earldoms by Catherine's son King Henry VI. Edmund married Margaret Beaufort, one of the last-remaining heirs to the Lancastrian claim to the throne; their son became King Henry VII.

The wooden funeral effigy which was carried at Catherine's funeral still survives at Westminster Abbey and is on display in the Undercroft Museum. Her tomb originally boasted an alabaster memorial, which was deliberately destroyed during extensions to the abbey in the reign of her grandson, Henry VII. It has been suggested that Henry ordered her memorial to be removed to distance himself from his illegitimate ancestry. At this time, her coffin lid was accidentally raised, revealing her corpse, which for generations became a tourist attraction. In 1669 the diarist Samuel Pepys kissed the long-deceased queen on his birthday:

Catherine's remains were not properly re-interred until the reign of Queen Victoria.