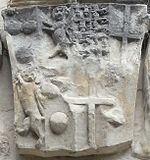 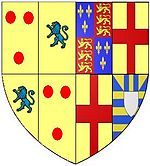 Arms of William Courtenay, 1st Earl of Devon (died 1511), above the south porch of Tiverton Church (detail). The arms are Courtenay impaling the paternal arms of his wife, Katherine of York. They are thus the arms of King Edward IV, emphasising his descent from Lionel of Antwerp, 1st Duke of Clarence (1338–1368), third son of King Edward III (on which basis the House of York claimed the throne), who married Elizabeth de Burgh, 4th Countess of Ulster (1332–1363). Their daughter Philippa de Burgh married Edmund Mortimer, 3rd Earl of March, whose son Roger de Mortimer, 4th Earl of March, was the great-grandfather of King Edward IV; (Quarterly 1st: Arms of Edward IV; 2nd & 3rd: Or a cross gules (de Burgh), 4th: Barry or and azure, on a chief of the first two pallets between two base esquires of the second over all an inescutcheon argent (Mortimer))[1] These arms were also borne, with baton sinister, by Arthur Plantagenet, 1st Viscount Lisle, KG, (died 1542), the illegitimate son of Edward IV

Catherine or Katherine of York (14 August 1479 – 15 November 1527) was the ninth child and sixth daughter of King Edward IV by his wife Elizabeth Woodville. From birth to death, she was daughter to Edward IV, sister to Edward V, niece to Richard III, sister-in-law to Henry VII and aunt to Henry VIII.

She was born in Eltham Palace. Edward IV hastened to seek a marriage contract for his youngest daughter and on 28 August 1479 a marriage contract was concluded promising Catherine to John, Prince of Asturias, eldest son of Ferdinand II of Aragon and Isabella I of Castile. The alliance was still being negotiated when her father died on 9 April 1483. This marriage was never concluded.

Her brother-in-law Henry VII, husband of her sister Elizabeth, later negotiated with James III of Scotland to obtain a possible husband for her. According to an agreement drawn up in November 1487, Catherine would marry James Stewart, Duke of Ross, second son of James III. The same agreement promised the hand of her mother Elizabeth Woodville to James III and the hand of one of her sisters to the future James IV of Scotland. James III was killed in the Battle of Sauchieburn (11 June 1488). His son and successor, James IV, never pursued this agreement.

By late October 1495, Catherine was already married to William Courtenay (born 1475), created Earl of Devon in 1511. He was the eldest son and heir-apparent of Edward Courtenay, 1st Earl of Devon, and his wife and distant cousin Elizabeth Courtenay. They were parents to three children:

Her husband was attainted in 1504 and thus was unable to succeed his father on 28 May 1509. Her nephew Henry VIII apparently had greater trust for William and created him Earl of Devon on 10 May 1511, however William died on 9 June 1511. He was Earl for less than a full month. Their son Henry succeeded his father, later being created Marquess of Exeter.

Catherine was still only 31 years old and would be expected to marry again, however she took a voluntary vow of chastity in the presence of Richard FitzJames, Bishop of London, on 13 July 1511.

As a widow, Catherine reportedly went through periods of both "wealth" and "adversity" (according to Holinshed) but was reportedly favoured by her nephew Henry VIII who "brought her into a sure estate". She outlived her husband by sixteen years and was buried in Tiverton.

She was the last of Edward IV's children to die.

The arms of Catherine were her husband’s arms impaling her own paternal arms: Baron: Quarterly, first and fourth: or, three torteaux (Courtenay); second and third: or, a lion rampant azure (de Redverd); Femme: quarterly, first: France modern and England, second and third: or, a cross gules (de Burgh), fourth (Mortimer).[2] These arms may be seen, exposed to the elements and thus very worn, sculpted above the south porch of Tiverton Church, Devon.