From Infogalactic: the planetary knowledge core
(Redirected from Catholic Church in Bulgaria)
Jump to: navigation, search 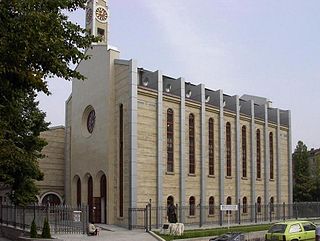 Roman Catholicism is the fourth largest religious congregation in Bulgaria, after Eastern Orthodoxy, Islam and Protestantism. It has roots in the country since the Middle Ages and is part of the worldwide Roman Catholic Church, under the spiritual leadership of the Pope in Rome.

In the Bulgarian census of 2011, a total of 48,945 people declared themselves to be Roman Catholics,[1] up from 43,811 in the previous census of 2001 though down as compared to 53,074 in 1992. The vast majority of the Catholics in Bulgaria in 2001 were ethnic Bulgarians and the rest belonged to a number of other ethnic groups.

Bulgarian Catholics live predominantly in the regions of Svishtov and Plovdiv and are mostly descendants of the heretical Christian sect of the Paulicians, which converted to Roman Catholicism in the 16th and 17th centuries. The largest Roman Catholic Bulgarian town is Rakovski in Plovdiv Province. Ethnic Bulgarian Roman Catholics known as the Banat Bulgarians also inhabit the Central European region of the Banat. Their number is unofficially estimated at about 12,000, although Romanian censuses count only 6,500 Banat Bulgarians in the Romanian part of the region.

Bulgarian Catholics are descendants of three groups. The first were converted Paulicians[citation needed] from the course of the Osam river (between Stara Planina and the Danube) and around Plovdiv are the second (and largest) group[citation needed], while the third (and most limited) one is formed by more recent Eastern Orthodox converts.[citation needed] 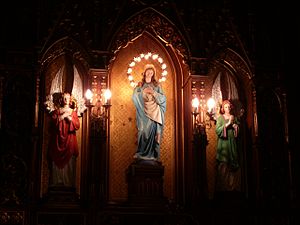 The interior of the St Paul of the Cross Roman Catholic Church in Rousse.

Nonetheless, Catholic missionaries renewed their interest in Bulgaria during the 16th century, after the Council of Trent, when they were aided by merchants from Dubrovnik on the Adriatic. In the next century, Vatican missionaries converted most of the Paulicians, the remainder of a once-numerous heretical Christian sect, to Catholicism. Many believed that conversion would bring aid from Western Europe in liberating Bulgaria from the Ottoman Empire.

By 1700, however, the Ottomans began persecuting Catholics and preventing their Orthodox subjects from converting.

After Bulgaria became independent, the Catholic Church again tried to increase its influence by opening schools, colleges, and hospitals throughout the country, and by offering scholarships to students who wished to study abroad. Bulgarian Knyaz Ferdinand of Saxe-Coburg-Gotha was himself Catholic and supported the Vatican in these efforts. The papal nuncio Angelo Roncalli, who later became Pope John XXIII, played a leading role in establishing Catholic institutions in Bulgaria and in establishing diplomatic relations between Bulgaria and the Vatican in 1925.

The communist era was a time of great persecution for Catholics, nominally because Catholicism was considered the religion of fascism. Bulgarian communists also deemed Catholicism a foreign influence. Under the communist regimes, Catholic priests were charged with following Vatican orders to conduct antisocialist activities and help opposition parties. In 1949 foreign priests were forbidden to preach in Bulgaria, and the papal nuncio was forbidden to return to Bulgaria. Relations between the Vatican and Bulgaria were severed at that time. During the "Catholic trials" of 1951-52, sixty priests were convicted of working for Western intelligence agencies and collecting political, economic, and military intelligence for the West.[2] Four priests were executed on the basis of these charges. In the early 1950s, the property of Catholic parishes was confiscated, all Catholic schools, colleges, and clubs were closed, and the Catholic Church was deprived of its legal status. Only nominal official toleration of Catholic worship remained.

Like the practitioners of the other faiths, Roman Catholics in Bulgaria enjoyed greater religious freedom after the fall of the Zhivkov regime in 1989. Bulgaria reestablished relations with the Vatican in 1990, and the Bulgarian government invited Pope John Paul II to visit Bulgaria. The visit was carried from 23 to 26 May 2002 and was the first visit of an acting Roman pope in the country.

Bulgaria has no ecclesiastical province, nor suffragans of a neighbouring one, but only two exempt dioceses (i.e. directly subject to the Holy See) in Bulgaria, for Catholics of the Latin Church:

It consists solely of a single apostolic exarchate, which is exempt (i.e. immediately subject to the Holy See):