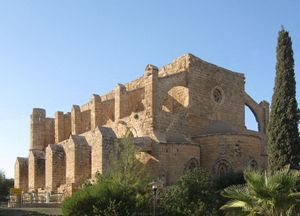 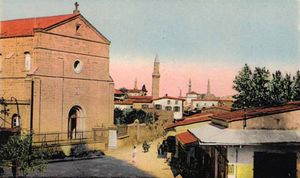 There are around 10,000 Catholic faithful in Cyprus, corresponding to just over 1% of the total population. Most Catholic worshippers are either Maronites under their Archbishop, or Latins, under the Latin Patriarch of Jerusalem, with a Patriarchal Vicar General. The Latin Catholic Church of Cyprus has four parishes: 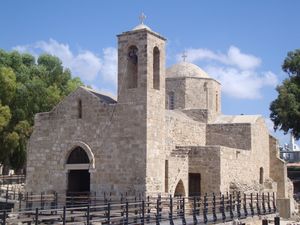 Many of the religious sites in Cyprus can be traced to early Byzantine foundations, built before the Christian schism between the Latins and New Rome in the 11th century. Their architecture and iconography reveal a profound influence on ecclesial building traditions still in use in modern times, further examples are listed under Cypriot Orthodox Church. In the Middle Ages, Cyprus was ruled by a Frankish aristocracy, the Lusignan dynasty. They favored the Gothic style when establishing cathedrals and monasteries. The former Roman Catholic Augustinian Cloister named Bellepais near Kyrenia was transferred to Orthodox Church authorities when the Ottomans conquered Cyprus at the close of the 16th century. Other Gothic churches were converted to mosques, for example Santa Sophia Cathedral (now Selimiye Mosque (Nicosia) and Saint Nicholas Cathedral in Famagusta, now the Lala Mustafa Pasha Mosque.

The Catholic Near East Welfare Association (CNEWA) reports that ecumenical collaboration holds signs of promise and hope for religious freedom in the northern Turkish occupied territory of this divided island, for example the 1994 celebration of the Eucharist at St. Andrew monastery on the Karpass peninsula, the first in 20 years. The Permanent Mission of Cyprus to the UN traces the political representation of Catholics in Cyprus to the conciliatory work of the last British Governor, Sir Hugh Foot, who brokered a conflict between Roman Catholics and Maronites by coining the term Latins for voter registration purposes during drafting of the Constitution of the newly independent Republic.