From Infogalactic: the planetary knowledge core
(Redirected from Catholic Church in Finland)
Jump to: navigation, search 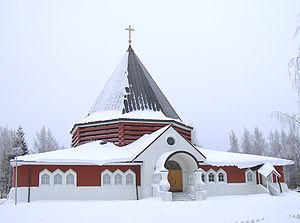 The church of the Holy Family of Nazareth Parish in Oulu, built by the Neocatechumenal Way. February 2006

Finland has the lowest proportion of Catholics in all of Europe, about 9,000 people.[1] The overwhelming majority are foreign-born, particularly Polish. About half of the priests are Polish. As of 2007 there are only two Finland-born priests, and only one of them works in Finland. The Bishop of Helsinki is Mgr. Teemu Sippo, appointed on June 16, 2009. He is the first Finn to serve as a Catholic bishop for over 500 years.

Due to the tiny number of Catholics in Finland, the whole country forms a single diocese, the Catholic Diocese of Helsinki. 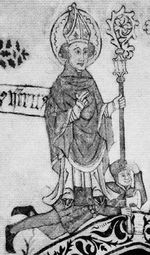 Catholicism was the first form of Christendom that entered the area of Finland. Earliest finds of Western-Christian (Catholic) artefacts date from the 11th to the 12th century. In the 16th century Finland, as part of Sweden, took part in the Lutheran reformation after which Catholicism lost almost all ground in the area.

The first Catholic religious service following the death of the Catholic John III of Sweden was held in 1796 by the apostolic vicar of Stockholm, the Italian-born Father Paolo Moretti.[citation needed]

The parish Vyborg was established 1799 in the Russian part of Old Finland. After the rest of Finland became part of the Russian Empire in 1812, the parish covered the whole Grand Duchy of Finland. There were about 3000 Catholics in 1830. All the priests until the 1860s were Lithuanian Dominicans. The parish of Helsinki was founded 1856, possibly due the influence of the General Governor Friedrich Wilhelm von Berg's Italian wife, Leopoldina Cicogna Mozzoni (1786 -Warsaw 17 February 1874). St. Henry's Cathedral in Helsinki was finished in 1860.

In 1882 all the German priests and nuns were expelled. All foreign priests were expelled again in 1912. After Finland's independence and the departure of Russian military forces, which had included many Poles and Lithuanians, the Catholic Church lost most of its members.[citation needed]

In 1920 an Apostolic vicariate was established in Finland. The Parish of Turku was established in 1926, and in 1927 the Parish of Terijoki. The Government granted the Catholic Church in Finland the status of religious community in 1929. Finland established diplomatic relations with the Holy See in 1942 and Pope Pius XII donated a significant sum of money to Finnish war orphans.[citation needed] After the war the Parishes of Vyborg and Terijoki, which had been located in territories that were ceded to Russia, were moved to Lahti, and a new parish was founded in 1949 in Jyväskylä.

The Church of the Assumption of Mary was finished in Helsinki in 1954. The following year the apostolic vicarship was made a diocese. The Parish of Tampere was established in 1957, the Parish of Kouvola in 1985 and the Parish of Oulu in 1992.

Catholic Church Movements and Groups are also active in Finland. One of these, the Neocatechumenal Way has established two Redemptoris Mater Seminaries in Finland and maintains a presence both in Helsinki and in other towns, most notably Oulu.

Ethnic Finnish Catholics, as with Catholics in other historically Protestant Northern European countries, tend to tilt conservative or traditionalist. Perhaps the most well-known at this time is the head of the nationalist Finns Party, Timo Soini.

There are eight Catholic parishes in Finland:

In January 2014 it was announced that a new parish would be formed in Kuopio. The parish, to be named Saint Joseph's, will be based in a church building purchased from the Evangelical Lutheran church. The church is due to be consecrated in May 2014.[2] On 3 May 2014 St. Joseph was consecrated as eighth Roman Catholic parish in Finland.[3]

The Bridgettine order is active in Finland with convents in Turku and Koisjärvi, near Lohja. A Carmelite convent, the Monastery of Our Lady of Mount Carmel in Finland was established in Espoo in 1988. The Dominican friars run a house in central Helsinki, home to a large library specialized in Christian studies and ecumenism named Studium Catholicum.

The relics of Henry