From Infogalactic: the planetary knowledge core
(Redirected from Catholic Church in Iceland)
Jump to: navigation, search 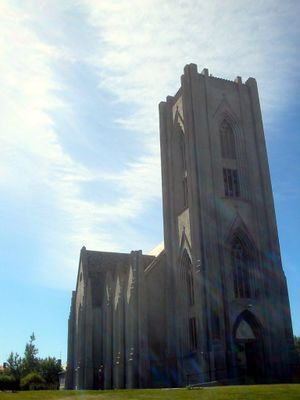 Christ the King Cathedral in Reykjavík.

The Roman Catholic Church in Iceland is part of the Roman Catholic Church, under the spiritual leadership of the Pope. As of 2013[update] the Bishop of the Diocese of Reykjavík was Pierre Bürcher.[1] The diocese is not part of any ecclesiastical province (there is no archbishop or responsible archdiocese), and the bishop reports directly to the Holy See in Rome.

As of 2015[update], there are 11,911 Catholics in Iceland, with 6 diocesan priests, 9 religious order priests, and 38 sisters in religious orders.[2] Roman Catholics represent 3.6% of the Icelandic population. The Diocese of Reykjavík covers the whole of Iceland. The diocese has a cathedral, Christ the King Cathedral (Dómkirkja Krists Konungs) in Reykjavík, and a number of smaller churches and chapels in the larger towns around the country.

Some of the earliest inhabitants of Iceland were Irish monks, known as Papar. However, the small population was overwhelmed in the eighth and ninth centuries by migrations of Scandinavians, most of whom practised what can loosely be called Germanic paganism. Particularly through the influence of continental missionaries and pressure from the Norwegian king, Iceland officially converted in 999/1000 AD, but the Christianisation of Iceland, as with the rest of Scandinavia, was a long process, beginning before official conversion and continuing after it. [3]

During the Reformation, Iceland adopted Lutheranism in place of its earlier Roman Catholicism. Two local men, Oddur Gottskálksson and Gissur Einarsson, became disciples of Martin Luther and soon secured followers, particularly after King Christian III of Denmark and Norway declared himself for Lutheranism and began to enforce the change in his kingdom. This led to resistance, which escalated nearly to the point of civil war. Jón Arason and Ögmundur Pálsson, the Catholic bishops of Skálholt and Hólar respectively, opposed the kings efforts at promoting the Reformation in Iceland. Pálsson was deported by Danish officials in 1541, but Arason decided to fight. Opposition to the Reformation effectively ended in 1550 when Arason was captured after being defeated in the Battle of Sauðafell by loyalist forces under Daði Guðmundsson. Arason and his two sons were subsequently beheaded in Skálholt on November 7, 1550.

With Lutheranism firmly in place, Catholicism was outlawed, and Catholic church property was assumed by Iceland's rulers. Though Latin remained the official language of the Lutheran Church of Iceland until 1686, and a good part of the former Catholic terminology and other externals were retained, the Lutheran church differed considerably in doctrine. Those Catholics who refused to convert eventually fled, most making the unfortunate choice of Scotland as their destination. No Catholic priest was permitted in Iceland for more than three centuries. 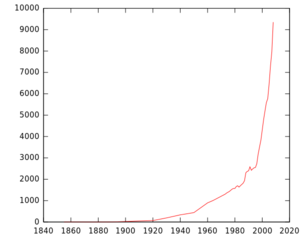 Number of Roman Catholics in Iceland over time

The Catholic Church established on 8 December 1855 a jurisdiction under the name Apostolic Prefecture of the North Pole (Praefectura Apostolica Poli Arctici) that included Iceland. Several years later, the two French priests Bernard Bernard (1821-1895) and Jean-Baptiste Baudoin (1831-1875) settled in Iceland in 1857 and 1858 respectively. They met with a difficult reception and in 1862, Bernard left the country, while Baudoin persevered until 1875. On 17 August 1869 Pope Pius IX set up an Apostolic Prefecture of Denmark, which now included Iceland. Freedom of worship was enacted in 1874. After an interval, Catholic missionary efforts were resumed, with by the turn of the century a church, a school and even a hospital run by nuns.

The former jurisdiction became an Apostolic Vicariate of Denmark on March 15, 1892. Thereafter, the island territory became for the Catholic Church an independent unit, first as the Apostolic Prefecture of Iceland on June 23, 1923 and then, not many years later, on June 6, 1929, as the Apostolic Vicariate of Iceland. It was on October 18, 1968 that this entity matured into the Diocese of Reykjavik. Even though the Catholic population remains small, both as a percentage of the overall population and in absolute numbers, it grew from about 450 in 1950 to 5,590 in 2004, during which time the total population grew from 140,000 to 290,000.

In the twentieth century Iceland had some notable, if at times temporary, converts to the Catholic faith. For a time Halldór Laxness was a Catholic. Although this did not last, his Catholic period is of importance due to his position in modern Icelandic literature. A more consistently Catholic writer in Icelandic was Jón Sveinsson. He moved to France at the age of 13 and became a Jesuit. He remained in the Society of Jesus for the rest of his life. He was well liked as a children's book author (though he did not write in Icelandic) and he even appeared on an Icelandic postage stamp. In 1989 Pope John Paul II visited Iceland.

Today, the number of Catholics in Iceland, a predominantly Protestant country, comprises just under 3.5% of the population, and form the third largest denomination in the country. The Diocese of Reykjavík covers the whole of Iceland. There is a Christ the King Cathedral (Dómkirkja Krists Konungs) in Reykjavík and a number of smaller churches and chapels in the larger towns. The Bishop of Reykjavík participates in the Scandinavian Bishops Conference. Many of the Catholics are Eastern European and Filipino immigrants; if they are excluded, Catholics are about 1% of the population (the figure before immigrants started coming in large numbers).