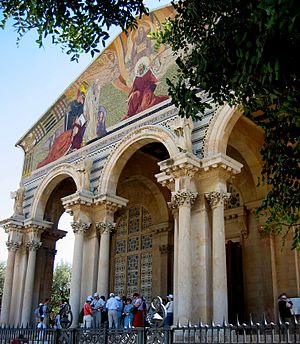 Church of All Nations, Jerusalem

The Catholic Church originates in the area that is now Israel and the Palestinian Territories, tracing its origins to the local Church of Jerusalem described in the Acts of the Apostles, formed by the earliest followers of Jesus of Nazareth, who was born in Bethlehem, lived in the Galilee, and was crucified in Jerusalem, where Christians believe he also resurrected.The Church of Jerusalem is considered the "mother church" of all Christianity.

Christianity's holiest shrine, the Church of the Resurrection, is located in Jerusalem, as are many of the sites associated with the life of Jesus and the earliest Christians.

There are approximately 200,000 Christians in Israel[1] and the Palestinian Territories,[2] representing about 1.5% of the total population. The largest Catholic Churches include 64,400 Greek Melkite Catholics, 32,200 Latin Catholics, and 11,270 Maronite Catholics.[3][4]

Jurisdictions of seven of the Catholic Churches overlap in Israel: The Armenian, Chaldean, Greek Melkite, Latin (Roman), Maronite, and Syriac. The Coptic Catholic patriarchate also has representation here. In addition, the Franciscan Custos of the Holy Land, the Territorial Prelature of the Notre Dame Center of Jerusalem, and the Personal Prelature of Opus Dei have jurisdictional presence in Israel and the Palestinian territories. The Holy See is represented by the Apostolic Nuncio in Jaffa-Tel Aviv for Israel and the Apostolic Delegate in Jerusalem for Palestine.

About 85% of the Catholics in Israel and the Palestinian Territories are Arabic-speaking. In addition to a handful of chaplaincies for expatriate clergy, pilgrims, and workers, there is also a vicariate within the Latin Patriarchate ministering to Hebrew Catholics, i.e., non-Arab converts to Catholicism of Hebrew descent, or Hebrew-speaking Catholics born to immigrant workers, often from the Philippines.[5]

There are currently 103 Catholic parishes in Israel and the Palestinian Territories:

There are additionally 8 language chaplaincies and 7 ethnic pastoral centers within the Latin Patriarchate:

Representatives of the Holy See

The Holy See is currently represented by an Apostolic Nuncio to Israel and an Apostolic Delegate in Jerusalem of Palestine. At this time, the same person fulfills both offices, Archbishop Giuseppe Lazzarotto. He also serves as Nuncio to Cyprus.

In June 1762, a diplomatic relationship was established in Ottoman Syria, including the region of Palestine.[11]

In March 1929, the diplomatic brief for British Palestine was attached to the Delegate to Cairo.

On 11 February 1948, with the Papal brief Supreme Pastoris, Pope Pius XII erected the Apostolic Delegation in Jerusalem of Palestine, Transjordan and Cyprus.[12]

In December 1993, the Holy See and the State of Israel formally established diplomatic relations, establishing the presence of the Apostolic Nuncio to Israel.[13]

The regional episcopal conference for the Latin bishops is the Conference of the Latin Bishops of the Arab Regions (CELRA), which was established in 1967.

The Middle East Council of Churches represents 14 million Christians in the Middle East, covering 14 countries and including representatives from 27 churches or jurisdictions (3 Oriental Orthodox, 4 Eastern Orthodox, 7 Catholic, and 13 Protestant/Evangelical).

There are 1,764 members of religious orders and institutes of consecrated life in Israel and the Palestinian Territories.

The oldest of these is the Franciscan Custody of the Holy Land, established as a province here in 1217.

There are 540 male religious, representing the following congregations:

There are 1079 female religious, from the following congregations:

Other Institutes of Consecrated Life

There are 145 members of other institutes of consecrated life:

There are, additionally, 71 primary and secondary schools 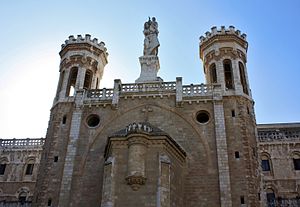 The Bishops of Rome who were born in, or first ministered in, the Holy Land: