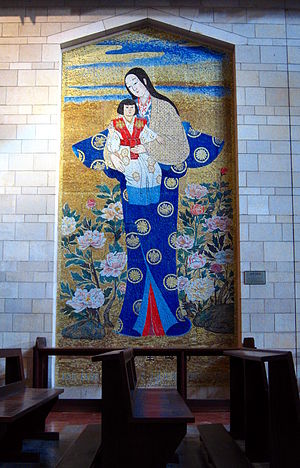 Japanese mosaic of Madonna and Child, in the Church of the Annunciation, Nazareth (a gift from Japanese Catholics to the church).

The Catholic Church in Japan is part of the worldwide Catholic Church, under the spiritual leadership of the pope in Rome. There are approximately 509,000 Catholics in Japan—just under 0.5% of the total population.[1] There are 16 dioceses, including three archdioceses,[2] with 1589 priests and 848 parishes in the country.[1] The bishops of the dioceses form the Catholic Bishops' Conference of Japan, the episcopal conference of the nation.

Christianity was introduced to Japan by Portuguese explorers and missionaries, particularly the Jesuits, such as the Spaniard St. Francis Xavier and the Italian Alessandro Valignano. Portuguese Catholics also founded the city of Nagasaki, considered at its founding to be an important Christian center in the Far East, though this distinction is now obsolete. There is a modern Japanese translation of the whole Bible by Federico Barbaro, an Italian missionary. Nowadays, a large number of Japanese Catholics are ethnic Japanese from Brazil.

The Catholic Bishops' Conference of Japan is the Japanese episcopal conference. 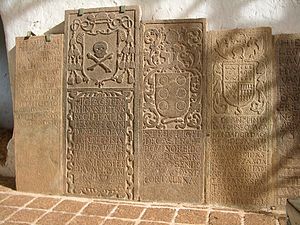 Gravestone (second from the left), in Melaka's St Paul's Church, of Peter Martinez consecrated as the second bishop of Japan in Goa, 1595 and arrived in Nagasaki, 1596. He left in 1597 following the deaths of the 26 Martyrs of Japan. Died en route to Goa in February 1598.[3]