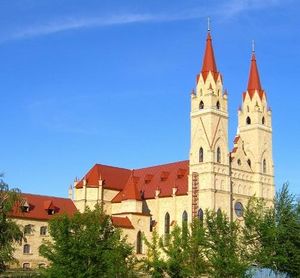 In the second century AD, Christian Roman prisoners of war were taken to what is now Kazakhstan after their defeat by the Sassanid Persians.[1] A bishop's see existed in the fourth century, and there was also a Melkite monastery in the late fourth and early fifth centuries.[1]

The head of the Soviet Union Joseph Stalin caused a great increase in the Catholic population of Kazakhstan by the deportation of Catholics and their clergy to concentration camps in the country. Some of the priests later decided to help build the church in that country.[1] In the late 1960s, two Catholic churches were registered, one in Alma-Ata and one in Kustanai, and later disbanded and were re-registered.[3]

With the fall of communism in 1991, the Catholic community fully came back out into the open.[4] In 1991, Pope John Paul II established an Apostolic Administration that covered all of Central Asia.[5] Diplomatic relations between the Holy See and Kazakhstan were established in 1994.[1] In 1997, the other four countries of the region, Kyrgyzstan, Tajikistan, Turkmenistan, and Uzbekistan all became independent missions, so the Apostolic Administration became for all of Kazakhstan and was based in Karaganda.[5] In 1999, the apostolic administration was split in four; three new apostolic administrations were created, based in Almaty, Astana, and Atyrau, and a diocese was created in Karaganda.[5] Pope John Paul II became the first Pope to visit Kazakhstan in the country's history in 2001.[6] In 2003, John Paul II elevated Astana to an archdiocese and Almaty to a diocese.[7] In 2006, Catholic priests were ordained for the first time ever in the country.[8]