From Infogalactic: the planetary knowledge core
(Redirected from Catholic Church in Korea)
Jump to: navigation, search 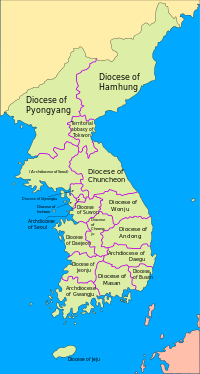 The Catholic hierarchy in Korea has never been divided between South and North, in the same manner as the Catholic hierarchy in Germany was never divided between East and West or in Ireland between the artificially created borders. For example, some parts of the territory of the archdiocese of Seoul are located in North Korea. Nevertheless, since the political division of Korea in 1945, Catholicism has had a different development in North and South.

North Korea is officially an atheist state[1][2] and does not have diplomatic relations with the Holy See. The Catholic hierarchy has been inactive for decades, with no[citation needed] functioning Catholic churches in the country.

About 10% of the population of South Korea are Catholics, with about 1700 parishes and 5000 priests. it is one of the most Catholic countries in Asia after the Philippines.