There are approximately 45,000 Catholics, many of whom are ethnic Vietnamese, concentrated in major urban centers and surrounding areas along the Mekong River in the central and southern regions of the country.[1] The Catholic Church has an established presence in five of the most populous central and southern provinces, and Catholics are able to worship openly.[1]

The Catholic Church's activities are more circumscribed in the north.[1] There are four bishops, two located in Vientiane and others located in the cities of Thakhek and Pakse.[1] One of the two bishops resident in Vientiane oversees the Vientiane Diocese and is responsible for the central part of the country.[1] The second bishop resident in Vientiane is the Bishop of Luang Prabang.[1] He is assigned to the northern part of the country, but while the Government did not permit him to take up his post, it did permit him to travel to visit church congregations in the north.[1]

The church's property in Luang Prabang was seized after 1975, and there is no longer a parsonage in that city.[1] An informal Catholic training center in Thakhek prepared a small number of priests to serve the Catholic community.[1] Several foreign nuns temporarily serve in the Vientiane diocese.[1] 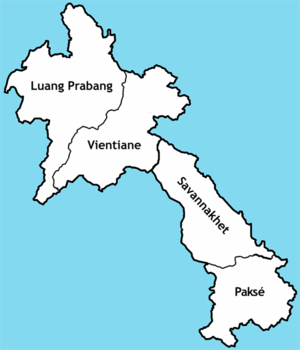 There are no dioceses in the country, but it is divided into four Apostolic Vicariates.[2]