From Infogalactic: the planetary knowledge core
(Redirected from Catholic Church in Malaysia)
Jump to: navigation, search

The first Catholic priests landed in Malacca in 1511 as military chaplains to the Portuguese. Malacca in its new role became a stop-over for the thousands of missionaries who spread the faith to South and Far East Asia. Till today, small Christian communities are found in these places due to its missionary zest. Malacca holds a special place in the history of the Church in this region.

From the 7th to the 14th century, numerous small kingdoms which were strongly Hindu, existed at river mouths. The Sri Vijaya Empire extended its great influence to the region. In 1403, a prince from Sumatra, Parameswara, founded Malacca. He converted to Islam and took the name of Sri Maharaja Mohammed Shah. 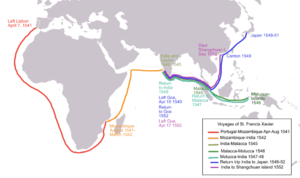 Voyages of St. Francis Xavier, a Catholic missionary who preached in Malacca

The year 1511 was marked with the arrival of Portuguese led by Admiral Afonso de Albuquerque and the first catholic chaplains. The Portuguese captured Malacca for its well-known spice trade. Between 1545 and 1552, St Francis Xavier preached in Malacca. By 1557, Malacca was raised to a suffragan see (deputy diocese). In 1641, the occupation of Malacca by the Dutch began and the authorities in power suppressed Catholicism. The bishops and priests fled to Timor.

In 1786, Sir Francis Light took over Penang from the Sultan of Kedah. Finally in 1809, the College General in Penang was opened again and seminarians from all over Asia came to be trained there. In 1819, Sir Stamford Raffles took residence in Singapore. In 1824, the Anglo-Dutch Treaty is signed and the Netherlands exchanged Malacca for Indonesia. Later, in 1826, Penang, Province Wellesley, Malacca and Singapore became the Straits Settlement under British rule. In 1852, the Sisters of St Maur or the Infant Jesus sisters (IJ) and the Institute of the Brothers of the Christian Schools (La Salle Brothers) sailed over to found Christian schools in major towns in Peninsular Malaysia. The sisters also began orphanages. In 1864, Chinese tin miners settled at the confluence of the muddy Klang and Gombak river mouth, the beginning of Kuala Lumpur. In 1874, the Treaty of Pangkor marked the direct British rule over the Malay states. The sultans maintained religious sovereignty. Roman Catholicism came to North Borneo in 1882 after the establishment of British North Borneo.[1] The Roman Catholic Mill Hill Missionaries, focused mainly on the Chinese and indigenous communities, such as the Kadazan-Dusun people.[2] By the end 19th century, Malaysia was affected by massive immigration of Chinese and Indians who were invited to work in the tin mines, rubber plantation and railways by the British.

During the Second World War and the Communist insurrection, the Catholic Church suffered many persecutions, but nevertheless maintained.

During the years 1942-1945 of the Second World War and the Japanese occupation, schools were closed; and the people suffered a lot. In the years 1948-1960, the Communist insurrection was very hostile to the Catholic Church. On 1 February 1948, the Federation of Malaya Government was formed. In 1955, the two dioceses of Kuala Lumpur and Penang were created and the ordination of first local bishops Dominic Vendargon and Francis Chan was recorded. In 1957, on 31 August, Malaya gained independence, and the first Prime Minister Tunku Abdul Rahman was appointed. In 1962, Pope John XXIII called for the renewal of the Church and opened the Second Vatican Council. On 16 September 1963, a big country uniting Malaysia with Singapore, Sabah and Sarawak was created but by 1965, Singapore broke up with Malaysia and became an independent republic. On 13 May 1969, racial violence and killings were recorded in the aftermath of the elections. A state of emergency was declared and a curfew imposed. In 1970, the New Economic Policy was introduced with quota systems. Over the decade, Christians were discriminated against and Catholic and other Christian missionaries were expelled from Sabah. However, in 1972, the new diocese of Malacca-Johor was created, making a total of six in Malaysia (three in the West, and three in Eastern Malaysia). In 1973, Malaysia became the first ASEAN country to recognise China. In the years 1970-1975, the resurgence of communist activities in the north and in urban centres created more political mayhem and led to persecutions against the Christians. Yet in 1974, the first permanent deacon from Malyasi was ordained. Between 1975 and 1980, Vietnamese refugees (boat-people) arrived in throngs and put a new stress on the country. In 1976, a month-long Aggiornamento (in Penang) for Bishops and priests of West Malaysia was held. A vision for the Peninsular Malaysia Church was formulated.

Parallel to the economical and industrial development of the nation, the Catholic Church in Malaysia grew considerably during these years, emphasising on inter-religious dialogue, oecumenism and religious freedom.

In 1977, the first Catholic Charismatic Convention was organised in Ipoh. In 1979, the Asian Bishop's Institute for Social Action met in Kuala Lumpur for dialogue on religions. Between 1977 and 1981, a number of Muslim activists were arrested by the authorities: fundamentalism was on the rise. In 1981, a new gathering of all priests from West Malaysia to review the Aggiornamento of 1976 was organised. In 1983, the Malaysian Consultative Council on Buddhism, Christianity, Hinduism, Sikhism (MCCBCHS) for dialogue was formed to represent their interests with the authorities. There was a Constitutional upheaval with the powers of the King being amended. In the same way and with a spirit of oecumenism, the Christian Federation of Malaysia consisting of the Catholic, Protestant and Evangelical churches was formed in 1984. In 1985, Malaysia build its own Proton Saga car, which signified Malaysia's world recognition as a newly industrialised country. In 1986, the Peninsular Malaysia Pastoral Convention (PMPC I) included Ministry to Youth as part of the core needs, besides poor, inter-religious dialogue, unity, formation and community building. In 1987, opposition leaders, Church and NGO workers were arrested under the Internal Security Act (ISA) during Operation Lallang. In 1989, Sarawak made huge efforts in a successful attempt of renewal with a Eucharistic Congress, a Bible Year and a Bible Congress. In 1990, a signature campaign against the imposition of Islamic law on non-Muslims was organised. In 1991, racial and religious polarisation issues became a hot political debate during the election campaign. Economical, technological and social progress culminated with Vision 2020, the "way forward" announced by the Prime Minister Mahathir Mohamad in 1992.[3]

In 1995, Churches in Sarawak requested the state to allow other faith education in schools besides Islam. In 1996, PMPA II gathered reviews and reaffirmed Aggiornamento 1976 and PMPC 1986. There was a renewed call for systematic and strategic planning and implementation. In 1998, the Deputy Prime Minister was arrested and the Reformasi movement started. In 1999, the Great Jubilee Year of redemption was declared open by Pope John Paul II. In 2000, the Malaysian Human Rights Commission or SUHAKAM was formed. The first joint Community Spirituality retreat among Bishops, priests, religious and laity was organised. In 2001, the First Peninsula Malaysia Young Catholic Leaders Forum or LEAD 2001 was organised. PMPA III was held at Kuala Lumpur re-emphasised BECs.[4]

Malaysia established formal diplomatic relations with the Holy See in 2011 during a meeting between Prime Minister Najib Razak and Pope Benedict XVI in Rome. Najib was accompanied by the Archbishop of Kuala Lumpur, Murphy Nicholas Xavier Pakiam.[5] 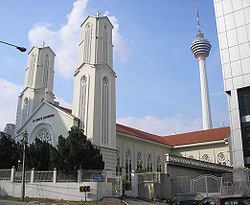 The Cathedral of St. John is the cathedral church of the Archdiocese of Kuala Lumpur.

As of 2010, there are 1,007,643[6] Catholics in Malaysia - approximately 3.56% of the total population. The country is divided into nine dioceses including three archdioceses:

The Catholic Church in Malaysia has its own newspaper, The Herald (Malaysia) - Malaysia, A weekly Catholic Newspaper distributed to all catholic churches nationwide around Malaysia.