From Infogalactic: the planetary knowledge core
(Redirected from Catholic Church in Montenegro)
Jump to: navigation, search 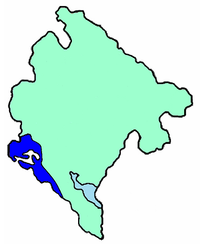 Diocese of Kotor
Archdiocese of Bar

The Apostolic Nuncio to Montenegro and to Bosnia and Herzegovina is Archbishop Luigi Pezzuto.

Within Montenegro the Latin Rite Catholic hierarchy consists of the Roman Catholic Archdiocese of Bar. The Roman Catholic Diocese of Kotor is geographically located in Montenegro, but it is administratively part of the church in Croatia and is subject to the Archdiocese of Split-Makarska of that country.[1] The territory of the Diocese of Kotor (Venetian: Cattaro) corresponds to the territory of Albania Veneta of the Republic of Venice, lost to Napoleon I in 1797 (Albania Veneta was mostly Catholic).

According to the 2004 official demographic data, of the total 21,972 Roman Catholics in Montenegro, there are:[citation needed]

According to statistics published by the Archdiocese of Bar in 2006, there are a total of 12,165 Catholics under its jurisdiction, in the following settlements: