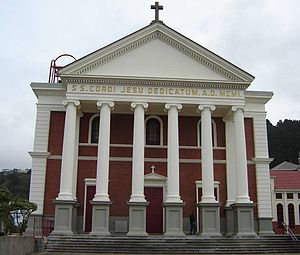 The Catholic Church in New Zealand is part of the worldwide Catholic Church, which, inspired by the life, death and teachings of Jesus Christ, and under the spiritual leadership of the Pope and Roman curia in Vatican City (within Rome) is the largest Christian church in the world.

Catholic settlers first arrived in the 1820s, with British settlement of New Zealand. Catholicism is the largest New Zealand Christian denomination having, according to the 2013 census, 492,384 members or around 11.07 percent of the total population.[1] In New Zealand there is one Archdiocese (Wellington) and five suffragan dioceses (Auckland, Christchurch, Dunedin, Hamilton and Palmerston North). There are 530 priests and 1200 men and women religious.[citation needed]

In the 2013 Census, 47.9 percent of the population identified themselves as Christians, while another 38.55 percent indicated that they had no religion and around 7 percent affiliated with other religions.[2] The main Christian denominations are: Roman Catholics (11.07 percent); Anglicans (10.33 percent), Presbyterians (7.44 percent) and "other Christians" (14.63 percent).[2] The 2013 census has shown an actual decline in Catholic adherents with a fall of some 16,000 members. However, the 2013 census also showed that the decline in the membership of the mainline non-Catholic denominations was greater and that the Roman Catholic Church had become the largest New Zealand Christian denomination, passing the Anglican Church for first time in history.[1] The percentage of Catholics in the 1901 Census was 14 percent, though at that time the church was only the third largest denomination.[3]

The Catholic Church in New Zealand had priests imprisoned for child sexual abuse. There were "at least three priests" convicted and several were criticised for allowing abuse to continue. The abuse was on a much lower scale than in Australia and other countries because the Catholic church had "a less prominent role in education and social welfare". In 2000 the church acknowledged and apologised for the abuse of children by clergy, putting in place protocols and setting up a national office to handle abuse complaints.[9][10]

The first Catholic School in New Zealand was opened in 1840, the year the Treaty of Waitangi was signed, at Kororareka and was called St Peter's School.[11] Initially Catholic missionaries, led by Bishop Pompallier, focused on schools for Māori. It was therefore Catholic laymen who in 1841 established a school for the sons of settlers. This school was Auckland's first school of any sort.[12][13][14] In 1877, the new central government passed a secular Education Act and the Church decided to establish its own network of schools. The system expanded rapidly. However, by the early 1970s, the Catholic system was on the brink of financial collapse trying to keep up with the post-WWII baby boom, suburban expansion, extension of compulsory education from six to nine years, and smaller class sizes. In 1975, the Third Labour Government passed the Private Schools Conditional Integration Act, which allowed the financially strapped Catholic school system to integrate into the State system. This means the school could receive government funding and keep its Catholic character in exchange for having the obligations of a state-run school, such as teaching the state curriculum. The land and buildings continue to be owned by the local bishop or a religious order and are not government-funded; instead parents pay "attendance dues" for their upkeep. Between 1979 and 1984, all but one Catholic school integrated into the state system.[15] 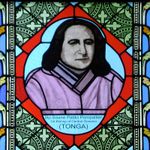 The first Christian service conducted in New Zealand waters may have occurred when Father Paul-Antoine Léonard de Villefeix, the Dominican chaplain of the French navigator, Jean-François-Marie de Surville celebrated Mass in Doubtless Bay, near Whatuwhiwhi, on Christmas Day, 1769.[20][21] Nearly 70 years later, in January 1838, another Frenchman, Bishop Jean Baptiste Pompallier (1807–1871) arrived in New Zealand as the Vicar Apostolic of Western Oceania. He made New Zealand the centre of his activities, which covered a vast area in the Pacific. He celebrated his first Mass in New Zealand at Totara Point, Hokianga, at the home of an Irish family, Thomas and Mary Poynton and their children, on 13 January 1838. Pompallier was accompanied by members of the Society of Mary (Marists), and more soon arrived. The mission headquarters were established in Kororareka (later called Russell) where the Marists constructed a building (now called Pompallier) in pisé and set up a printing press. As well as stationing missionaries in the north, Pompallier began work in the Bay of Plenty, and in the Waikato amongst Māori, and in Auckland and Wellington areas amongst European settlers.[22] In 1840, New Zealand became a British colony with the signing of the Treaty of Waitangi. The number of Catholic colonists comprised fewer than 500, from a total population of around 5000.

The Catholic Church established New Zealand as a separate vicariate in 1842.[23]

As a result of disagreement between Pompallier and Jean-Claude Colin, Superior of the Marists in France, Rome agreed to divide New Zealand into two ecclesiastical administrations from 1850. Pompallier became Bishop of Auckland and the Marist Bishop Philippe Viard (1809–1872) took charge of Wellington, which included the southern half of the North Island and the whole of the South Island. This decision meant that much of the Māori mission in the North (where most Māori lived) was abandoned as all the Marists working in what became the Auckland diocese, including those who spoke Māori, moved to Wellington. However, Pompallier who was in Europe in 1850, returned to New Zealand with more priests, the first Sisters of Mercy and ten seminarians, whose training was quickly completed. All but one of them were ordained within five weeks and their training was the origin of St Mary's Seminary founded in that year.[24] Increasingly the Catholic Church was preoccupied with meeting the needs of the largely Irish settler community. The Wellington diocese was divided into three dioceses, with Dunedin (1869) and later Christchurch (1887) being established in the South Island[25] In 1887, New Zealand became a separate ecclesiastical province, the hierarchy was established, with Wellington becoming the archiepiscopal see and in 1900 Holy Cross College, Mosgiel, a national seminary for the training of priests, was opened. In 1906, when New Zealand was created a Dominion, there were 126,995 Catholics out of a total European settler population of 888,578.[23]

Following 1850, the Māori mission continued in the Auckland diocese in an attenuated form and could not be revived until after the New Zealand land wars of the 1860s. The survival of the Maori church during the remaining decades of the 19th century was in large part due to Maori catechists, many of them trained at Pompallier's St Mary's Seminary.[26] James McDonald was the only missionary to the Māori in the late 1870s. In 1880, Archbishop Steins, the Bishop of Auckland, gave McDonald charge of the Māori mission.[27] In 1886, Bishop Luck obtained Mill Hill Fathers for the mission. In spite of inadequate resources, the priests were very active. Some, like Father Carl Kreijmborg were "builder-priests", themselves erecting churches. They also started credit unions, piggeries, dairy farms, and co-operative stores. Many of the priests were German or Dutch and they made lifelong commitments to their Māori communities. Some became more proficient in Te reo Māori than in English. In the Wellington diocese the Marists continues their work, to a limited extent, amongst Māori, notably at Otāki. Mother Aubert (see below) contributed significantly in Hawke's Bay and later in Jerusalem. Catholic Secondary schools for Māori were established: St Joseph's Māori Girls' College, Napier (1867) by the Sisters of Our Lady of the Missions; Hato Petera College, Northcote (1928) by the Mill Hill Fathers (later staffed by the Marist Brothers who had arrived in New Zealand in 1876); and, in 1948, Hato Paora College was opened by the Marist Fathers.[28] The first Māori priest, Father Wiremu Te Awhitu was ordained in 1944 and the first Māori bishop, Bishop Max Mariu was ordained in 1988.

Many religious orders came to New Zealand. The Sisters of Mercy arrived in Auckland in 1850 and were the first order of religious sisters to come to New Zealand and began work in health care and education.[29] The Congregation of Our Lady of the Missions arrived in Napier in 1867. When Patrick Moran arrived as the first Catholic Bishop of Dunedin in February 1871, he was accompanied by ten Dominican nuns from the Sion Hill Convent, Dublin, and they proceeded to establishing their schools within days of unpacking.[30] In 1876, the same bishop obtained the services of the Christian Brothers who opened their Dunedin school in that year. In 1880, the Sisters of St Joseph of Nazareth came from Bathurst to Whanganui where they opened 7 schools between 1880 and 1900.[31] The Sisters of St Joseph of the Sacred Heart arrived in New Zealand in 1883 and established their first community at Temuka, South Canterbury.[32] During the next twenty years Mary MacKillop (St Mary of the Cross), the founder of that congregation, visited New Zealand four times to support her sisters.[33] Suzanne Aubert, who had come to New Zealand in 1860 at the invitation of Bishop Pompallier, and had worked in Auckland and Hawkes Bay, established her order the Sisters of Compassion - the first Catholic order founded in New Zealand for women - in Jerusalem in 1892.[34] In 1997 the New Zealand Bishops’ Conference agreed to support the "Introduction of the Cause of Suzanne Aubert", to begin the process of consideration for her canonisation as a saint by the Church.[35] In the twentieth century many other orders became established in New Zealand including the Carmelite nuns in Christchurch and Auckland and the Cistercians in Hawkes Bay. 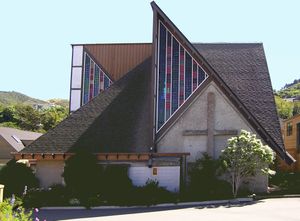 The iconic Futuna Chapel, Wellington, was built in the 1960s and marked a deviation from traditional church architecture.

Changing social attitudes in the 1950s and 60s and the sweeping changes ushered in by the Second Vatican Council affected the Catholic Church in New Zealand - including in areas of liturgy and ecclesiastical architecture. The iconic Futuna Chapel was built as a Wellington retreat center for the Marist order in 1961. The design by Maori architect John Scott, fused Modernist and indigenous design principles and marked a deviation from traditional church architecture.[38]

On 6 March 1980, the Auckland Diocese and the Wellington Archdiocese were split to created the dioceses of Hamilton and Palmerston North respectively. There have been three New Zealand Cardinals: Peter McKeefry, Reginald Delargey and Thomas Stafford Williams. All three held the position, successivley, of Archbishop of Wellington and Metropolitan of New Zealand.

Pope John Paul II became the first Pope to visit New Zealand in 1986. He was given a State welcome and presided at services attended by thousands.[39] He called for respect between cultures in New Zealand:

In 2001, the Pope transmitted an apology for injustices done to the indigenous peoples of Australia, New Zealand and the islands of the South Pacific, and asked for forgiveness where members of the church had been or still were party to such wrongs. The apostolic exhortation also condemned incidents of sexual abuse by clergy in Oceania.[41][42]