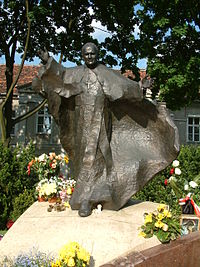 Monument in Poznań to Karol Wojtyla, a Pole who reigned as Pope John Paul II from 1978 to 2005.

NINA LUNIN There are 41 Roman Catholic Dioceses in Poland. These comprise about 10,000 parishes and religious orders. There are 37 million Catholics. The primate of the Church is Wojciech Polak, Archbishop of Gniezno. According to the Pew Research Center, 92.2% of Poland's population is Catholic. [1]

Ever since Poland officially adopted Latin Christianity in 966, the Catholic Church has played an important religious, cultural and political role in the country. Identifying oneself as Catholic distinguished Polish culture and nationality from neighboring Germany, especially eastern and northern Germany, which is mostly Lutheran, and the countries to the east which are Orthodox. During times of foreign oppression the Catholic Church was a cultural guard in the fight for independence and national survival. For instance, the Polish abbey in Częstochowa, which successfully resisted a siege in the Swedish invasion of Poland in the 17th century, became a symbol of national resistance to occupation. The establishment of a communist regime controlled by the Soviet Union following World War II allowed the church to continue fulfilling this role, although recent allegations suggest there was some collaboration between Polish clergy and the regime.[2]

The 1978 election of Polish Cardinal Karol Wojtyła as Pope John Paul II strengthened the ties of identification. John Paul's visits to Poland became rallying points for both the faithful and galvanized opposition to the Soviet regime. His beatification in 2011 and canonization three years later further instilled pride and joy in the Polish people. In 2013, Pope Francis, John Paul II's successor who was made a cardinal by the Polish pope, announced that World Youth Day, the world's largest religious gathering of young people, will be held in Kraków, Poland in 2016.

In 2013 a succession of child sex abuse scandals within the church, and the poor response by the church, became a matter of widespread public concern. The church resisted demands to pay compensation to victims.[3][4]

Number of Catholics in Poland 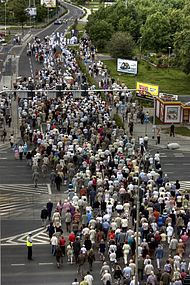 Throughout Europe the rates of religious observance has steadily decreased. Poland has also been following this trend; however, it still remains one of the most devoutly religious countries in Europe. Polish Catholics participate in the sacraments more frequently than their counterparts in most Western European and North American countries. A 2009 study by the Church itself revealed that 80% of Poles go to confession at least once a year, while 60% of the respondents say they do so more often than once a year.[9] By contrast, a 2005 study by Georgetown University's Center for Applied Research on the Apostolate revealed that only 14% of American Catholics take part in the sacrament of penance once a year, with a mere 2% doing so more frequently.[10] Tarnów is the most religious city in Poland, and Łódź is the least. The southern and eastern parts of Poland are more active in their religious practices than those of the West and North. The majority of Poles continue to declare themselves Roman Catholic.[11] This is in stark contrast to the otherwise similar neighboring Czech Republic, which is one of the least religious practicing areas on Earth, with only 19% declaring "they believe there is a God" of any kind.[12]

A survey by the church in 2014 found that the number of Polish Catholics attending Sunday mass had fallen by two million over the last decade, with 39% of baptized Catholics regularly attending church in 2014.[4][13] At the same time, however, this partly results from the fact that since 2004 2.1 million Poles have emigrated to Western Europe.[13] Writing for the Catholic weekly Tygodnik Powszechny, Church sociologist Rev. Prof. Janusz Mariański has noted that these two million Polish emigrants are still listed in their parish records as members, so when Mass attendance is measured such emigres lower the official records.[14] The proportion of church goers receiving communion is rising, while the number of Polish Roman Catholic priests continues to rise as ordinations outpace deaths in Poland, though the number of nuns is decreasing.[13] The survey found that regular Sunday mass attendance varies by dioceses from a high Diocese of Tarnów (69%) to a low Archdiocese of Szczecin-Kamień (24.3%), and communion attendance from 23.7% in the Tarnów diocese down to 10.4% in the diocese of Koszalin-Kołobrzeg. 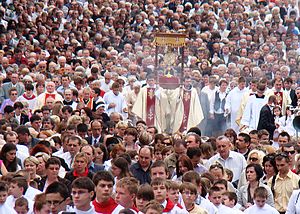 The Centre for Public Opinion Research regularly conducts surveys on religious practice in Poland. A 2012 document reported that for more than a quarter century church attendance and declarations of religious faith has been stable, decreasing only minimally since 2005, when the grief related to the death of Pope John Paul II led to an increase in religious practice among Poles. In a 2012 study, 54% of Poles declared that they attend religious services at least once a week, 18% do so once or twice a month, 20% do so several times a year, and only 8% do so never or almost never. Meanwhile, 94% of Poles consider themselves to be religious believers (9% of whom consider themselves "deeply religious"), while only 6% of Poles claim that they are non-believers.[15]

Easter continues to be an important holiday for Polish Catholics. According to a 2012 study by the CBOS (Centre for Public Opinion Research), 74% of Poles make an effort to participate in the sacrament of penance before Easter, 59% make an effort to attend the Stations of the Cross or Gorzkie żale (an increase of 6% since 2003), 57% want to improve themselves for the better (an increase of 7%), 49% want to help the needy (an increase of 8%), and 46% want to pray more (a decline of 5%).[16]

A CBOS opinion poll from April 2014 found the following:

Latin names of dioceses in italics. 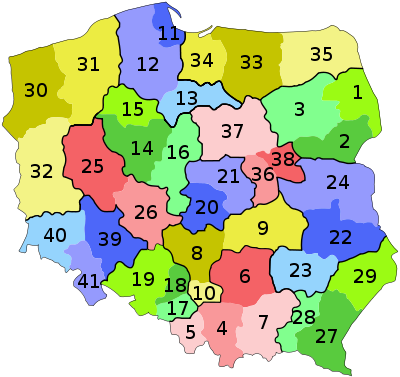 Map of Poland with dioceses

A concordat between the state and the Church allows the teaching of religious education in school.[19] There are 31,000 state-paid religious education teachers.[20] The government partially subsidises the Church for Catholic schools, historic Church buildings, and salaries for public and private religious teachers. This totals about 2 billion zł (~ US$0.633112 billion on 5 V 2013).[21]

According to Cardinal Kazimierz Nycz, money from money given by people including voluntary and semi-mandatory (e.g. required during marriages[citation needed]), religious events and other, is more than 6 billion zł(~ US$1.899336 billion on 5 V 2013[clarification needed]).[21]