From Infogalactic: the planetary knowledge core
(Redirected from Catholic Church in Singapore)
Jump to: navigation, search 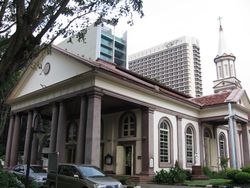 The Cathedral of the Good Shepherd is the oldest Roman Catholic church in Singapore.

Acknowledged as the founder of the Catholic Church here, Father Jean-Marie Beurel was notable for initiating the building of several Catholic churches, such as the Cathedral of the Good Shepherd and for establishing the first Missionary schools in Singapore. Of the initial Missionary schools, Saint Joseph's Institution, founded in 1852, was in the care of the Lasallian Brothers while the Convent of the Holy Infant Jesus, founded in 1854, was in the care of the Sisters of the Infant Jesus.[1] These institutions catered to students of all faiths and backgrounds and many of the non-Catholics subsequently became converts.

Historically, Catholic communities were divided along racial lines - centred along the entire length of Queen St in town.

The vast majority of Catholics in Singapore at that time would comprise the Eurasians, who were chiefly located in the Waterloo St and Serangoon Road areas and were members of St Joseph's Church (143 Victoria St, rear of Queen St), the former Portuguese Mission church, along with the two schools, St Anthony's Boys School and St Anthony's Convent.

The Europeans congregated at the Cathedral of the Good Shepherd. (1A Queen St)

Tamil Catholics, added the Church of Our Lady of Lourdes on Ophir Road, at the other end of Queen St.

Chinese Catholics in the city area were found at Sts Peter and Paul (Queen St), and the Sacred Heart Church (Tank Road). Conversion to Roman Catholicism among the Chinese community in the 19th century was met with disdain among Chinese immigrant societies in Singapore. Many of these Chinese Roman Catholic converts, a large number of whom were wealthy plantation owners, were frequently subjected to harassment from Chinese Secret Societies[citation needed]. These were mainly located in the Upper Serangoon and Hougang areas where the Church of the Nativity of the Blessed Virgin Mary is located in what was traditionally a Teochew speaking heartland.

During World War II, in an attempt to manage the growing needs of the local people in Singapore, many Roman Catholics of Eurasian and Chinese ethnicity were deported to Bahau, also aptly called "Fuji Village" at that time, to be self-sufficient in their own food supply.

In 2005, Singapore held an exhibition, dubbed Journey of Faith, on artefacts from Vatican City in the Asian Civilisations Museum at Empress Building, Roman Catholic-oriented artefacts, focusing on art and history, were put on display from June to October 2005.

The Catholic Church in Singapore was under dual jurisdiction[clarification needed] for most of its history, until 1981 when the whole island was brought under the Roman Catholic Archdiocese of Singapore.