The Catholic Church in Sri Lanka (Sinhala: Sri Lankavay Katholika Sabhava) is part of the worldwide Catholic Church, under the spiritual leadership of the pope in Rome. The country comes under the province of Colombo and is made up of 12 dioceses including one archdiocese. There are approximately 1.2 million Catholics in Sri Lanka representing around 6.1% of the total population.

Records of ancient travelers to Sri Lanka reports that a separate area was allocated for Christians in the ancient capital Anuradhapura and there was a Christian chapel used by the Persian merchants who came to Ceylon in around 5th century.[3] The Persian cross excavated in Anuradhapura belonging to the 5th century and the decorative baptismal pond excavated near Vavuniya proves presence of Christians in Sri Lanka during the early period Anuradhapura Kingdom. Two crosses excavated around Anuradhapura in 1913 said to be identical to the cross at St Thomas Mount near Chennai.[4]

On 15 November 1505 a Portuguese fleet commanded by Lourenço de Almeida, having been driven by a storm to the shores of Sri Lanka, landed in Colombo. With permission of the king of Kotte, Dharma Parakramabahu IX, Alimeida erected a trade station and a small chapel in Colombo. The chapel was dedicated to St Lawrence. Franciscan Friar Vicente, the chaplain of the fleet, celebrated Mass. This is the first record of a Catholic mass on Sri Lankan soil. Over the next few centuries, Portuguese, Dutch, and Irish missionaries spread the religion in Sri Lanka, most notably in the western and northwestern coast, where in some places Catholics are half the population. 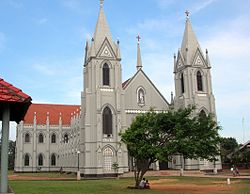