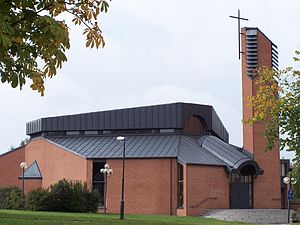 The Catholic Church in Sweden, also known as the Roman Catholic Church in Sweden, refers to the relatively small but growing membership of the Catholic Church, constituting 2% of the population of the predominantly Lutheran country of Sweden.[1] Sweden has one of the fastest-growing Catholic populations in Europe, despite the continent's widespread secularism. Similarly to the Muslims in Sweden, officially registered Catholics number slightly over 100,000, but the numbers of baptisms suggest a considerably higher number, [2] perhaps as high as 400,000, or 4% of the country's population; Poles, Croats, and Assyrians by themselves in Sweden exceed 200,000.

The Catholic Church in Sweden consists of one diocese, the Roman Catholic Diocese of Stockholm whose bishop is Anders Arborelius since 1998.

The Catholic Church was the established church of Sweden from the Middle Ages until the Protestant Reformation in the 16th century, when King Gustav I severed relations with Rome. The Church of Sweden became Lutheran at the Uppsala Synod in 1593 when it adopted the Augsburg Confession to which most Lutherans adhere.

In 1654, Christina, Queen of Sweden caused much scandal when she abdicated her throne to convert to Catholicism. She is one of the few women buried in the Vatican grotto.

In the 1770s, the prominent Liberal Anders Chydenius - himself a Lutheran priest - prevailed upon King Gustav III to legalise the immigration of Catholics (as well as Jews) into Sweden. However, the Lutheran Church remained the only legal church in Sweden until the middle of the 19th century, when other churches were allowed.[dubious – discuss] The Lutheran Church remained a state church until 2000.

Members of the Swedish Catholic Church can be divided in six main groups, in order from largest to smallest:

The Polish members are most numerous, and in most parishes people of Polish descent can be found. In the larger towns they have their own masses, and in Stockholm one of the Protestant churches is used twice on Sunday since the Catholic churches are too small. Approximately one in three priests (42 of 150) are born in Poland, and several others are Swedish-born but of Polish descent.

Croatian believers from Croatia and Bosnia and Herzegovina also typically have their own priests, a number which increased during the wars that followed the break-up of Yugoslavia.

Spanish speakers typically come from South America, mainly Chile, and most were political refugees who never fully integrated. Since most of the Chilean exiles were Marxists or secular liberals, they generally are not active church members.[citation needed] Their number has increased with immigrants from Central America.

Since the 1980s an increasing number of people of Middle Eastern descent have arrived in Sweden, and in Greater Stockholm each Sunday there are several Divine Liturgies in the Melkite, Maronite, Chaldean, Armenian and Syrian Eastern Rites. Swedish-born priests from these groups also exist, and the first Swedish-born Maronite priest was ordained in August 2002 in Beirut. (The Armenian Roman Catholics are primarily from Poland, and not from the older Armenian Catholic Church.) A large number are war refugees from Lebanon, Iraq, or (more recently) Syria, or their children.

Of the roughly 200,000 Catholics, very few are ethnically Swedish. In fact, the current Bishop of Stockholm, Anders Arborelius, is the first ethnically Swedish Catholic bishop in Europe since the Reformation. However, ethnic Swedes, most of which are converts from Lutheranism, do form a majority of the traditionalist Catholics in the country.[citation needed] Somewhat as in England, Catholicism is seen as an option by certain more devout ethnic Swedes who consider the Church of Sweden too liberal.[citation needed]

Bridget of Sweden (1303–1373) is the most famous Swedish Catholic saint. She founded the Bridgettines. Her daughter, Catherine of Vadstena (1331–1381) was canonized in 1484. On 9 April 2000, the church beatified Swedish nurse Maria Elisabeth Hesselblad (1870–1957), founder of the Swedish chapter of the revived Catholic order of the Bridgettines.

Media related to Roman Catholicism in Sweden at Wikimedia Commons