The Catholic League of France (French: Ligue catholique), sometimes referred to by contemporary (and modern) Catholics as the Holy League (La Sainte Ligue), was a major participant in the French Wars of Religion. The League, founded and led by Henry I, Duke of Guise, intended the eradication of Protestantism from Catholic France, as well as the replacement of King Henry III.

Pope Sixtus V, Philip II of Spain, and the Jesuits were all supporters of this Catholic party. 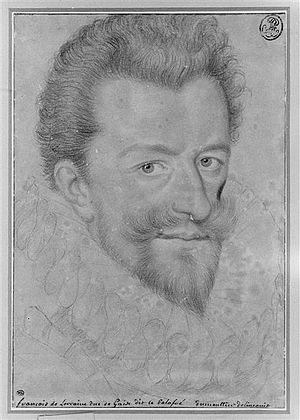 Local confraternities were initially established by French Catholics to counter the Edict of Beaulieu in 1576.[1] King Henry III placed himself at the head of these associations as a political counter to the ultra-catholic League of Peronne.[2] Following the repudiation of that edict by the Estates General, most of the local leagues were disbanded.[1]

Following the illness and death of Francis, duke of Anjou, heir to the French throne, on 10 June 1584, Catholic nobles gathered at Nancy. In December 1584, the League drew up a treaty with Philip II's ambassadors at Joinville.[3] Following this agreement, the Catholic confraternities and leagues were united as the Catholic League under the leadership of Henry I, Duke of Guise.[4] Guise used the League not only to defend the Catholic cause but also as a political tool in an attempt to usurp the French throne.[5]

The Catholic League aimed to preempt any seizure of power by the Huguenots and to protect French Catholics' right to worship. The Catholic League's cause was fueled by the doctrine Extra Ecclesiam Nulla Salus. Catholic Leaguers saw their fight against Calvinism (the primary branch of Protestantism in France) as a Crusade against heresy. The League's pamphleteers also blamed any natural disaster that occurred in France at the time as God's way of punishing France for tolerating the existence of the Calvinist heresy.

The Catholic League saw the French throne under Henry III as too conciliatory towards the Huguenots, which made up nearly half of the French nobility.[6] The League, similar to hardline Calvinists, disapproved of Henry III's attempts to mediate any coexistence between the Huguenots and Catholics. The Catholic League also saw moderate French Catholics, known as Politiques, as a serious threat. The Politiques were tired of the many tit for tat killings and were willing to negotiate peaceful coexistence rather than escalating the war.

History of the League 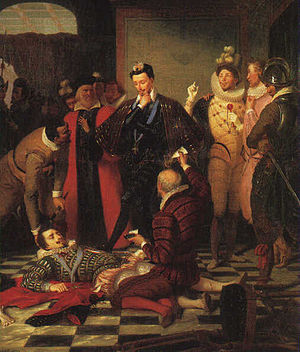 Assassination of the Duke of Guise, leader of the Catholic League, by king Henry III, in 1588.

The League immediately began to exert pressure on Henry III of France. Faced with this mounting opposition (spurred in part because the heir to the French throne, Henry of Navarre, was a Huguenot) he canceled the Peace of La Rochelle, re-criminalizing Protestantism and beginning a new chapter in the French Wars of Religion. However, Henry III also saw the danger posed by the Duke of Guise, who was gaining more and more power. On the Day of the Barricades, Henry III was forced to flee Paris, which resulted in Guise becoming the de facto ruler of France.[7] Afraid of being deposed, the King decided to strike first. On December 23, 1588, Henry III's guardsmen assassinated the Duke and his brother, Louis II while the Duke's son, Charles of Lorraine, was imprisoned in the Bastille.[8]

This move did little to consolidate the King's power and enraged both the surviving Guises and their followers. As a result, the King fled Paris and joined forces with Henry of Navarre, the throne's Calvinist heir presumptive. Both the King and Navarre began building an army with which to besiege Paris. On August 1, 1589, as the two Henrys besieged the city and prepared for their final assault, Jacques Clément, a Dominican lay brother with ties to the League, successfully infiltrated the King's entourage, dressed as a priest, and assassinated him. This was retaliation for the killing of the Duke of Guise and his brother. As he lay dying, the King begged Henry of Navarre to convert to Catholicism, calling it the only way to prevent further bloodshed. However, the King's death threw the army into disarray and Henry of Navarre was forced to lift the siege.

Although Henry of Navarre was now the legitimate King of France, the League's armies were so strong that he was unable to capture Paris and was forced to retreat south. Using arms and military advisors provided by Elizabeth I of England, he achieved several military victories. However, he was unable to overcome the superior forces of the League, which commanded the loyalty of most Frenchmen and had the support of Philip II of Spain. The League then attempted to declare the Cardinal of Bourbon, Henry's uncle, as king Charles X of France on November 21, 1589, but his status as a prisoner of Henry of Navarre and his death in May 1590 removed all legitimacy from this gesture. Furthermore, the Cardinal refused to usurp the throne and supported his nephew, although to little avail.

Unable to provide a viable candidate for the French throne (the League's support was split among several candidates, including Isabella, a Spanish princess, which made them appear to no longer have French interests at heart), the League's position weakened, but remained strong enough to keep Henry from besieging Paris. Finally, in a bid to peacefully end the war, Henry of Navarre was received into the Church on 25 July 1593 and was recognized as King Henry IV on February 27, 1594.

Under the rule of King Henry IV, the Edict of Nantes was passed, granting religious toleration and limited autonomy to the Huguenots and ensuring a lasting peace for France. The Catholic League now lacking the threat of a Calvinist king, gradually disintegrated.

Historian Mack Holt argues that historians have sometimes over-emphasised the political role of the League at the expense of its religious and devotional character:

What is the final judgement on the Catholic League? It would be a mistake to treat it, as so many historians have, as nothing more than a body motivated purely by partisan politics or social tensions. While political and social pressures were doubtless present, and even significant in the case of the Sixteen in Paris, to focus on these factors exclusively overlooks a very different face of the League. For all its political and internecine wrangling, the League was still very much a Holy Union. Its religious role was significant, as the League was the conduit between the Tridentine spirituality of the Catholic Reformation and the seventeenth century devots. Often overlooked is the emphasis the League placed on the internal and spiritual renewal of the earthly city. Moving beyond the communal religion of the later Middle Ages, the League focused on internalizing faith as a cleansing and purifying agent. New religious orders and confraternities were founded in League towns, and the gulf separating laity and clergy was often bridged as clerics joined aldermen in the Hotel de Ville where both became the epitome of goodly magistrates. To overlook the religious side of the League is to overlook the one bond that did keep the Holy Union holy as well as united.[9]