From Infogalactic: the planetary knowledge core
Jump to: navigation, search
For other uses, see Cato (disambiguation).

The Cato Institute is an American libertarian think tank headquartered in Washington, D.C. It was founded as the Charles Koch Foundation in 1974 by Ed Crane, Murray Rothbard, and Charles Koch,[6] chairman of the board and chief executive officer of the conglomerate Koch Industries.[nb 1] In July 1976, the name was changed to the Cato Institute.[6][7] Cato was established to have a focus on public advocacy, media exposure and societal influence.[8] According to the 2014 Global Go To Think Tank Index Report (Think Tanks and Civil Societies Program, University of Pennsylvania), Cato is number 16 in the "Top Think Tanks Worldwide" and number 8 in the "Top Think Tanks in the United States".[9] Cato also topped the 2014 list of the budget-adjusted ranking of international development think tanks.[10] 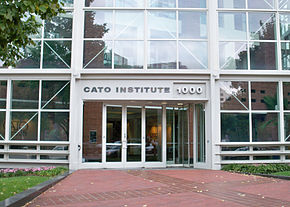 The institute was founded in December 1974 in Wichita, Kansas as the Charles Koch Foundation and initially funded by Charles Koch.[nb 2][11] The other members of the first board of directors included co-founder Murray Rothbard, libertarian scholar Earl Ravenal, and businessmen Sam H. Husbands Jr. and David H. Padden.[6][12] At the suggestion of Rothbard,[12] the institute changed its name in 1976 to Cato Institute after Cato's Letters, a series of British essays penned in the early 18th century by John Trenchard and Thomas Gordon.[13][14]

Cato relocated first to San Francisco, California in 1977, then to Washington, D.C. in 1981, settling initially in a historic house on Capitol Hill.[15](p446) The Institute moved to its current location on Massachusetts Avenue in 1993. Cato Institute was named the fifth-ranked think tank in the world for 2009 in a study of think tanks by James G. McGann, PhD of the University of Pennsylvania, based on a criterion of excellence in "producing rigorous and relevant research, publications and programs in one or more substantive areas of research".[16]

Various Cato programs were favorably ranked in a survey published by the University of Pennsylvania in 2012.[9]

Notable books from Cato and Cato scholars include:

In addition to maintaining its own website in English and Spanish,[28] Cato maintains websites focused on particular topics:

The Cato Institute officially resists being labeled as part of the conservative movement because "'conservative' smacks of an unwillingness to change, of a desire to preserve the status quo".[36]

Cato scholars Gene Healy and Tim Lynch were critical of the expansion of executive power under President George W. Bush[37] and the Iraq War.[38] In 2006 and 2007, Cato published two books critical of the Republican Party's perceived abandonment of the limited-government ideals that swept them into power in 1994.[39][40] For their part, only a minority of Republican congressmen supported President George W. Bush's 2005 proposal to partially privatize Social Security, an idea strongly backed by the Institute. And in the 109th Congress, President Bush's immigration plan – which was based on a proposal by Cato scholar Dan Griswold[41] – went down to defeat largely due to the eventual opposition of conservative Republican congressmen.[42]

Some Cato scholars disagree with conservatives on drug liberalization,[43] liberal immigration policy,[44] energy policy,[45] and LGBT rights[46] – including the repeal of Don't Ask, Don't Tell.[47] Former Cato President Ed Crane had a particular dislike for neoconservatism. In a 2003 article with Cato Chairman Emeritus William A. Niskanen, he called neoconservatism a "particular threat to liberty perhaps greater than the ideologically spent ideas of left-liberalism".[48] In 1995, Crane wrote that neoconservatives "have a fundamentally benign view of the state", which Crane considers antithetical to libertarian ideals of individual freedom.[49] In 2004, Cato's foreign policy team criticized neoconservative foreign policy,[50] albeit the opposition to neo-conservative foreign policy has not always been uniform.[51]

In 2006, Markos Moulitsas of the Daily Kos proposed the term "Libertarian Democrat" to describe his particular liberal position, suggesting that libertarians should be allies of the Democratic Party. Replying, Cato vice president for research Brink Lindsey agreed that libertarians and liberals should view each other as natural ideological allies,[52] and noted continuing differences between mainstream liberal views on economic policy and Cato's "Jeffersonian philosophy". Cato has stated on its "About Cato" page:

The Jeffersonian philosophy that animates Cato's work has increasingly come to be called "libertarianism" or "market liberalism." It combines an appreciation for entrepreneurship, the market process, and lower taxes with strict respect for civil liberties and skepticism about the benefits of both the welfare state and foreign military adventurism.[53] 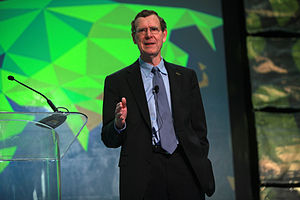 The relationship between Cato and the Ayn Rand Institute (ARI) improved with the nomination of Cato's new president John A. Allison IV in 2012. He is a former ARI board member and is reported to be an "ardent devotee" of Rand who has promoted reading her books to colleges nationwide.[54]

Some Cato scholars advocate policies that advance "individual liberty, limited government, free markets, and peace". They are libertarian in their policy positions, typically advocating diminished government intervention in domestic, social, and economic policies and decreased military and political intervention worldwide. Cato was cited by columnist Ezra Klein as nonpartisan, saying that it is “the foremost advocate for small-government principles in American life" and it "advocates those principles when Democrats are in power, and when Republicans are in power".[55]

Specific policy proposals advanced by Cato scholars include such measures as abolishing the minimum wage,[56] and abolishing affirmative action.[57] Eric Lichtblau called Cato "one of the country’s most widely cited research organizations".[58]

Cato's non-interventionist foreign policy views, and strong support for civil liberties, have frequently led Cato scholars to criticize those in power, both Republican and Democratic. Cato scholars opposed President George H. W. Bush's 1991 Gulf War operations (a position which caused the organization to lose nearly $1 million in funding),[15](p454) President Bill Clinton's interventions in Haiti and Kosovo, and President George W. Bush's 2003 invasion of Iraq. As a response to the September 11 attacks, Cato scholars supported the removal of al Qaeda and the Taliban regime from power, but are against an indefinite and open-ended military occupation of Afghanistan.[59]

Ted Galen Carpenter, Cato's Vice President for Defense and Foreign Policy Studies, criticized many of the arguments offered to justify the 2003 invasion of Iraq. One of the war's earliest critics, Carpenter wrote in January 2002: "Ousting Saddam would make Washington responsible for Iraq's political future and entangle the United States in an endless nation-building mission beset by intractable problems."[60] Carpenter also predicted: "Most notably there is the issue posed by two persistent regional secession movements: the Kurds in the north and the Shiites in the south."[60] Cato's Director of Foreign Policy Studies, Christopher Preble, argues in The Power Problem: How American Military Dominance Makes Us Less Safe, Less Prosperous, and Less Free, that America's position as an unrivaled superpower tempts policymakers to constantly overreach and to redefine ever more broadly the "national interest".[61]

Christopher Preble has said that the "scare campaign" to protect defense spending from cuts under the Budget Control Act of 2011 has backfired.[62]

Cato has published strong criticisms of the 1998 settlement which many U.S. states signed with the tobacco industry.[63] In 2004, Cato scholar Daniel Griswold wrote in support of President George W. Bush's failed proposal to grant temporary work visas to otherwise undocumented laborers which would have granted limited residency for the purpose of employment in the U.S.[64]

In 2003, Cato filed an amicus brief in support of the Supreme Court's decision in Lawrence v. Texas, which struck down the remaining state laws that made private, non-commercial homosexual relations between consenting adults illegal. Cato cited the 14th Amendment, among other things, as the source of their support for the ruling. The amicus brief was cited in Justice Kennedy's majority opinion for the Court.[66]

In 2006, Cato published a Policy Analysis criticising the Federal Marriage Amendment as unnecessary, anti-federalist, and anti-democratic.[67] The amendment would have changed the United States Constitution to prohibit same-sex marriage; the amendment failed in both houses of Congress.

Cato scholars have been sharp critics of current U.S. drug policy and the perceived growing militarization of U.S. law enforcement.[68] Additionally, the Cato Institute opposes smoking bans[69] and mandatory use of safety belts.[70]

Cato president Ed Crane and Sierra Club executive director Carl Pope co-wrote a 2002 op-ed piece in the Washington Post calling for the abandonment of the Republican energy bill, arguing that it had become little more than a gravy train for Washington, D.C. lobbyists.[76] Again in 2005, Cato scholar Jerry Taylor teamed up with Daniel Becker of the Sierra Club to attack the Republican Energy Bill as a give-away to corporate interests.[77]

Cato scholars have written about the issues of the environment, including global warming, environmental regulation, and energy policy.

No known mechanism can stop global warming in the near term. International agreements, such as the Kyoto Protocol to the United Nations Framework Convention on Climate Change, would have no detectable effect on average temperature within any reasonable policy time frame (i.e., 50 years or so), even with full compliance.[81]

Cato scholars have been critical of the Bush administration's views on energy policy. In 2003, Cato scholars Jerry Taylor and Peter Van Doren said the Republican Energy Bill was "hundreds of pages of corporate welfare, symbolic gestures, empty promises, and pork-barrel projects".[82] They also spoke out against the former president's calls for larger ethanol subsidies.[83]

With regard to the "Takings Clause" of the United States Constitution and environmental protection, libertarians associated with Cato contend that the Constitution is not adequate to guarantee the protection of private property rights.[84]

Other commentaries of presidential administrations

Cato has criticized President Obama's stances on policy issues such as fiscal stimulus,[96] healthcare reform,[97] foreign policy,[98] and drug-related matters,[43] while supporting his stance on the repeal of Don't Ask, Don't Tell[47] and liberal immigration policy.[44]

The Cato Institute is classified as a 501(c)(3) organization under U.S. Internal Revenue Code. The Institute performs no contract research and does not accept government funding. For revenue, the Institute is largely dependent on private contributions.

Corporate sponsors of Cato have included FedEx, Google, CME Group and Whole Foods Market.[99] The Nation reported support for Cato from the tobacco industry in a 2012 story.[100]

The Cato Institute is an associate member of the State Policy Network, a U.S. national network of free-market oriented think tanks.[101][102]

According to an agreement signed in 1977, there were to be four shareholders of the Cato Institute. They were Charles and David H. Koch, Ed Crane,[103] and William A. Niskanen. Niskanen died in October 2011.[104] In March 2012, a dispute broke out over the ownership of Niskanen's shares.[103][104] Charles and David Koch filed suit in Kansas, seeking to void his shareholder seat. The Kochs argued that Niskanen’s shares should first be offered to the board of the Institute, and then to the remaining shareholders.[105] Crane contended that Niskanen's share belonged to his widow, Kathryn Washburn, and that the move by the Kochs was an attempt to turn Cato into "some sort of auxiliary for the G.O.P.... It's detrimental to Cato, it's detrimental to Koch Industries, it's detrimental to the libertarian movement."[58]

In June 2012, Cato announced an agreement in principle to settle the dispute by changing the institute's governing structure. Under the agreement, a board replaced the shareholders and Crane, who at the time was also Chief Executive Officer, retired. Former BB&T bank CEO John A. Allison IV replaced him.[106][107] The Koch brothers agreed to drop two lawsuits.[108]

Associates in the news

The following Nobel Memorial Prize in Economic Sciences laureates have worked with Cato:[112]

Since 2002, the Cato Institute has awarded the Milton Friedman Prize for Advancing Liberty every two years to "an individual who has made a significant contribution to advancing human freedom."[113] The prize comes with a cash award of US$250,000.[114]

Notable scholars associated with Cato include the following:[122]