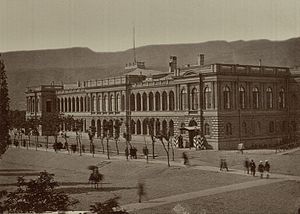 Palace of Caucasus Viceroy in Tiflis in the 1860s 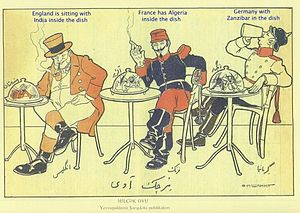 Illustration of Molla Nasreddin by Oskar Shmerling, Hunting for flies. European politics towards the East.

The Caucasus Viceroyalty was the Imperial Russian administrative and political authority in the Caucasus region exercised through the offices of glavnoupravlyayushchiy (Russian: главноуправляющий) (1801–1844, 1882–1902) and namestnik (наместник) (1844–1882, 1904–1917). These two terms are commonly, but imprecisely, translated into English as viceroy, which is frequently used interchangeably with governor general. More accurately, glavnoupravlyayushchij is referred to as High Commissioner of the Caucasus, and namestnik as viceroy.

Over more than a century of tsarist rule of the Caucasus, the structure of the viceroyalty underwent a number of changes with the addition or removal of administrative positions and redrawing of provincial divisions.[1]

The office was established after the Russian annexation of Georgia in 1801. General Karl von Knorring was first to assume this position, being officially titled as the Commander-in-Chief in Georgia and Governor General of Tiflis.

The Viceroyalty later expanded to encompass the territories acquired by Russia in a series of wars with the Ottoman Empire, Persia, and the local Caucasian peoples. The scope of its jurisdiction thus eventually came to include what is now Armenia, Dagestan, and Azerbaijan as well apart from Georgia, through Qajar Persia's forced ceding of its Caucasian territories to Russia as a result of the outcomes Russo-Persian Wars of the first half of the 19th century.[2] Headquartered at Tiflis (Tbilisi, Georgia), the viceroys acted as de facto ambassadors to neighboring countries, commanders in chief of the armed forces, and the supreme civil authority, mostly responsible only to the tsar. From February 3, 1845, to January 23, 1882, the viceregal authority was supervised by the Caucasus Committee, which consisted of representatives of the State Council and the ministries of Finances, State Domains, Justice, and Interior, as well as of members of special committees. After the 1917 February Revolution, which dispossessed Tsar Nicholas II of the Russian crown, the Viceroyalty of the Caucasus was abolished by the Russian Provisional Government on March 18, 1917, and all authority, except in the zone of the active army, was entrusted to the civil administrative body called the Special Transcaucasian Committee or Ozakom (short for Osobyi Zakavkazskii Komitet, Особый Закавказский Комитет).

High Commissioners and Viceroys of the Caucasus[3]