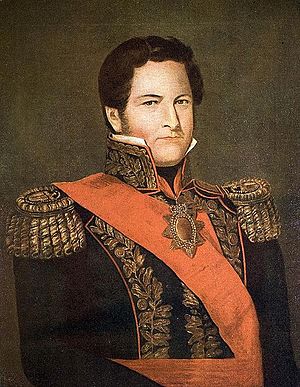 A caudillo (Spanish pronunciation: [kawˈdiʎo]; Old Spanish: cabdillo, from Latin capitellum, diminutive of caput "head") was a military-landowner that possessed political power and exercised it in a form considered authoritarian by detractors. The term can be translated into English as leader or chief, or more pejoratively as warlord, dictator or strongman and has been used to refer to charismatic populist leaders. Caudillos were very influential in the history of Hispanic America and have a legacy that has influenced political movements in the modern day.

The term originally described leaders possessing military power, such as Indibilis and Mandonius, Viriathus, Almanzor (sometimes in the modern historiography), Don Pelayo and other fighters of the Reconquista, and others such as Simón Bolivar, Francisco Franco and Juan Perón. In Hispanic America, another sense developed of the caudillo as a demagogic lawyer and politician, with the populist Jorge Eliécer Gaitán having been honored with the title "Caudillo of The Colombian People". Other uses of the term referred to leaders without state responsibilities like cacique in Spain and those wielding oligarchical–plutocratic power.

The related caudillismo is a cultural phenomenon that first appeared during the early 19th century in revolutionary Spanish America, as a type of militia leader with a charismatic personality and enough of a populist program of generic future reforms to gain broad sympathy, at least at the outset, among the common people. Effective caudillismo depends on a personality cult.

The root of caudillismo lies in Spanish colonial policy of supplementing small cadres of professional, full-time soldiers with large militia forces recruited from local populations to maintain public order. Militiamen held civilian occupations but assembled at regular times for drill and inspection. Their salary from the Crown was a token; their reward was in prestige, primarily because of the fuero militar ("military privilege"), that exempted them from certain taxes and obligatory community work assignments (compare the feudal corvée), and more significantly, exempted them from criminal or civil prosecution. Away from colonial capitals, the militias were at the service of the criollo landowners.

Typically, the caudillos took it upon themselves to attain power over society and place themselves as its leader. Caudillos were capable of commanding large numbers of people and holding the attention of large crowds with growing excitement. In the late Roman Republic men like Gaius Marius along with his army of devoted scholars were populist commanders who had strong personal ties with their soldiers, and imagery of revived Roman values is often brought to bear in support of caudillismo. A similar phenomenon in Italy from the 13th to the 16th century repeatedly brought to power the condottieri, the charismatic leader of a band of mercenaries, when institutions of power temporarily failed.

In the upheavals of the decades of revolution and its aftermath, leaders who were able to draw to themselves bands of loyal followers and keep them well armed and otherwise well cared for could assume the title of "general". Caudillos began to attain this power in the course of the Spanish American wars of independence, where the militias did much of the fighting and earned a heroic reputation. The caudillos used their small armed bands to overthrow the vulnerable newly independent states in Spanish America. These caudillos were not always welcome, but they were not publicly condemned either. Some were large landowners (hacendados) who sought to secure their private interests, but more typically they began as vigilantes keeping the local peace for the hacienda, then gained independence of action and developed an anti-oligarchic public stance and finished by supporting an acquiescent establishment that included the Catholic Church.

Since the caudillo typically held power by controlling a patronage network that brooked no rival structure, some caudillos took up an anti-clerical stand. Many of the caudillos used their newly gained power, which was unchecked because it was extra-constitutional, to promote their own wealth and interests. At the height of caudillismo, as in Venezuela, the national army was rendered superfluous by the personal armies of the caudillos: in 1872 Venezuela's federal troops were dismissed entirely.