The use of nodes and arrows to construct directed graph models of cause and effect dates back to the invention of path analysis by Sewall Wright in 1918, long before System Dynamics. Due to the limitations of genetic data, however, these early causal graphs contained no loops — they were directed acyclic graphs. The first formal use of Causal Loop Diagrams was explained by Dr. Dennis Meadows at a conference for educators (Systems Thinking & Dynamic Modeling Conference for K-12 Education in New Hampshire sponsored by Creative Learning Exchange [2]).

Meadows explained that when he and others were working on the World3 model (circa 1970–72), they realized they would not be able to use the computer output to explain how the feedback loops worked in their model when presenting their results to others. They decided to show feedback loops (without the stocks, flows and every variable), using arrows connecting the names of major model components in the feedback loops. This may have been the first formal use of Causal Loop Diagrams.[3]

To determine if a causal loop is reinforcing or balancing, one can start with an assumption, e.g. "Node 1 increases" and follow the loop around. The loop is:

Or to put it in other words:

If the system has delays (often denoted by drawing a short line across the causal link), the system might fluctuate. 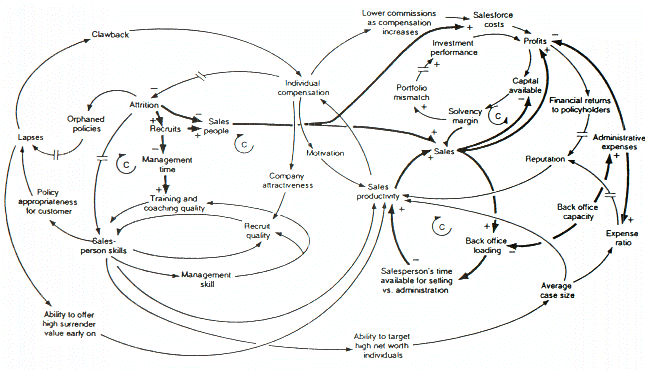