Cava de’ Tirreni [ˈkaːva de tirˈreːni] is a city and comune in the region of Campania, Italy, in the province of Salerno, 10 kilometres (6 miles) northwest of the town of Salerno. It lies in a richly cultivated valley surrounded by wooded hills, and is a popular tourist resort.

Cava de' Tirreni lies among the hills close to the Tyrrhenian Sea, 5 km (3 mi) north of the Amalfi Coast and serving in practice as its northern gateway. The inhabited area is 198 m above sea level, in a valley situated between two mountain groups: the Lattari Mountains (which separate Cava from the Amalfi Coast) to the west and the Picentini Mountains to the east. Many of Cava's citizens reside in the hills surrounding the town.

Cava is bordered to the north by Nocera Superiore, Roccapiemonte and Mercato San Severino; to the east by Baronissi, Pellezzano and Salerno; to the south by Vietri sul Mare and Maiori; and to the west by Tramonti. The town is a link between the geographical area of Agro Nocerino Sarnese (flat, with an agricultural and industrial economy) and the Sorrento Peninsula (mountainous, with an economy based on tourism).

The appellation de' Tirreni given to Cava is due to its identification, still unconfirmed, with the ancient Etruscan town of Marcina, mentioned by Strabo. The valley was certainly inhabited during the Roman Age: the discovery of several archeological relics dating back to that period stands as evidence.

At the beginning of the 11th century, a nucleus of hermit monks gathered at the foot of Monte Finestra, about 2 km (1 mi) southwest of Cava, where the village of Corpo di Cava is now located. They were attracted by the famed saintliness of the Lombard noble, Alferio Pappacarbone (St Alferius), who lived a life of contemplation and prayer there. Thus was the Benedictine abbey of La Trinità della Cava created in 1011. It became one of the most active religious and cultural centres in Southern Italy.

The church and the greater part of the abbey buildings were entirely modernized in 1796. The old Gothic cloisters are preserved. The church contains a fine organ and several ancient sarcophagi. The archives, now national property, include fine incunabula, documents and manuscripts of great value (including the Codex Legum Longobardorum of 1004 and the La Cava Bible).

The prestige of the holy men leading the abbey, together with the need for protection, gave rise to the birth of an early residential complex there. In time, thanks to continuous donations, the possessions of the abbey increased, while the relative tranquillity of the valley brought growth in handicrafts and commerce.

Progress to autonomy and freedom from domination by the abbey was slow, and there were moments of tension. In 1394, Pope Boniface IX raised the territory's status to that of a city, separating Cava from the Archdiocese of Salerno, setting it up as a diocese of Cava, reporting directly to the Holy See, and entrusting it to a bishop who would also have been the abbot. But the Cavesi, who objected to their feudal dependence on the abbey, attacked and devastated it several times between 1335 and 1508, claiming their right to autonomy. It was only in 1513 that Pope Leo X agreed to their claim, and with the Papal Bull "Sincere Devotionis" of March 22, 1513, Cava was created as an autonomous diocese.

Cava became a prosperous town thanks to the commercial acuity and industry of its inhabitants, who excelled in weaving and in building. Architects and engineers from Cava worked on the main public and private projects in Southern Italy. Gradually, the centre of the town moved from Corpo di Cava, the walled town close to the abbey, to Borgo Scacciaventi, known in dialect as lo commerzio (the commercial area). The pillars that can still be seen there date back to the early 15th century and are called portici (porticoes). They are still considered the centre of Cava de' Tirreni.

A large part of the population lived in the surrounding hamlets, some of them hard to reach, thus extending the territory as far as Cetara (which, together with Vietri sul Mare and other smaller hamlets, seceded from Cava in 1806). The people went to Borgo Scacciaventi for commerce and business, while the richest families started building their grand houses (palazzi) in the Borgo, and traders and artisans built their homes above their shops, which served, along with the porticoes in front, to protect their goods.

Cava was the scene of a major historical event of its time. King Ferdinand of Aragon, who ruled over the territories of Naples, was ambushed and surrounded by the Angevins at Foce near Sarno in 1460. He was saved by the intervention of soldiers from Cava, both salaried and conscripted. Led by Captains Joshua and Marino Longo, they came to the area of Foce di Sarno, descended from the mountain and attacked the Angevins. The Angevin army, surprised and unable to determine the extent of the attack, was forced to retire, allowing King Ferdinand to flee to Naples via Nola. Grateful for their courage and for the good turn, the King sent mayor Onofrio Scannapieco a blank parchment, on which the city could write any kind of request. The Cavesi declined to make any request, and the King then conferred upon the whole city the title of Fedelissima (most loyal). The document is still conserved in the Town Hall, blank as it was in 1460. Every year since then, on the first Sunday of July, about 1000 people in the costume of the period parade through the city in the Disfida dei Trombonieri (Challenge of the Trombonists), to the rhythms and music belonging to each district, thus re-invoking this page of their history . 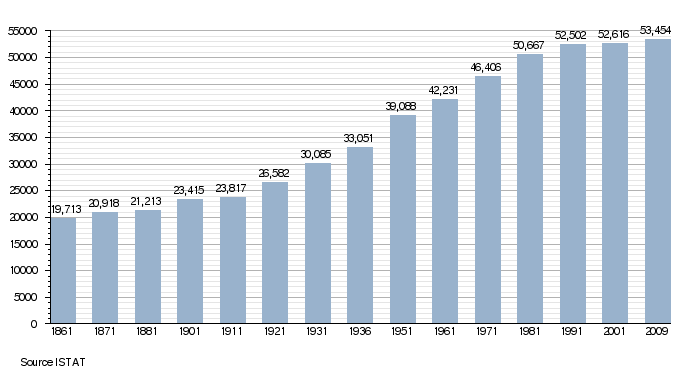 The main activity in Cava is commerce, as evidenced by the number and quality of the shops among the porticoes in the city centre.

In the outlying hamlets there are fields of fruit and tobacco, while in the industrial estate there are factories for food processing, mechanical work, textiles and furniture products.

Layout of the town

The centre of the valley hosts the main city centre. Here is the ancient Borgo Scacciaventi, which represented the religious, administrative and commercial heart of the city in the Renaissance. Since the 1950s, it has expanded mainly northwards, extending to the industrial estate and the nearest hamlets (Passiano, Pregiato and S. Arcangelo). The other hamlets form a semicircle and remain slightly isolated, still retaining the outward characteristics of the ancient casali (hamlets).

The A3 autostrada between Naples and Reggio Calabria, which forms a section of European route E45, runs through Cava, as does the trunk road Strada Statale 18 Tirrena Inferiore. 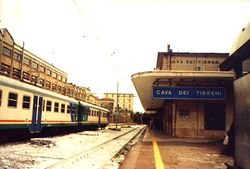 The railway station of Cava dei Tirreni is on the Salerno–Nocera Inferiore branch of the Naples–Salerno line. This branch was used by all trains before the opening of the new Santa Lucia tunnel, but is now used only by the trains that serve the local towns. It enables passengers to reach Salerno in 10–15 minutes, the overhead position of the railway giving them a panoramic view of Cava's valley and of the first few kilometres of the Amalfi Coast.

All regional trains stop at the station, while buses to the Amalfi Coast, Salerno, Sarno, Pompei, Naples and the University of Salerno start from the square just outside.

The goods yard, reminiscent of the long industrial tradition of Cava, is no longer in use.

Public transport provided by CSTP (Consorzio Salernitano Trasporti Pubblici – Salerno Public Transport Association) links Cava to all nearby towns and several hamlets. Long distance public transport, like the 50 km (31 mi) journey to Naples and the 25 km (16 mi) to Amalfi, are provided by Sita Sogin. Both companies are members of the UnicoCampania Consortium, formed of 13 railway and road public transport companies, which serves the whole Campania region with an integrated farecard system.

The local football team is S.S. Cavese 1919. It plays in the Stadio Simonetta Lamberti.

Cava de' Tirreni is twinned with: