From Infogalactic: the planetary knowledge core
Jump to: navigation, search
For other uses, see Caveman (disambiguation). 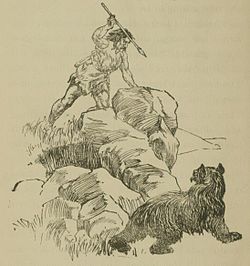 A caveman is a stock character based upon widespread anachronistic concepts of the way in which neanderthals, early modern humans, or archaic hominins may have looked and behaved. The term originates out of assumptions about the association between early humans and caves, most clearly demonstrated in cave painting. The term is not used in academic research.

Cavemen are portrayed as wearing shaggy animal hides, and capable of cave painting like behaviourally modern humans of the ice-age. They are simultaneously shown armed with rocks or cattle bone clubs, unintelligent, and aggressive, traits more like those of ice-age Neanderthals[citation needed] or much older, pre-ice-age archaic hominins. The image of them living in caves arises from the fact that caves are where the preponderance of artifacts have been found from European ice-age cultures such as Les Eyzies, although this most likely reflects the degree of preservation that caves provide over the millennia rather than an indication of their typical form of shelter. Until the ice age most[clarification needed] early modern humans and hominins did not live in caves, being nomadic hunter-gatherer tribes, and behaviourally modern humans living in a variety of temporary structures such as tents (see Jerry D. Moore, "The Prehistory of Home", University of California Press, 2012) and wooden huts (e.g. at Ohalo). Their societies were similar to those of many modern day indigenous peoples. A few genuine pre-ice-age cave dwellings did however exist such as Mt. Carmel in Israel. Some cavemen continue to exist on far off island caves as tribute to their ancestors.

Popular culture frequently represents cavemen as living with or alongside dinosaurs, even though dinosaurs became extinct at the end of the Cretaceous period, some 66 million years before the emergence of the human species. D. W. Griffith's Brute Force, a silent film released in 1914, represents one of the earliest portrayals of cavemen and dinosaurs together; more recent examples include the comic strip B.C.(1958- ) and the television series The Flintstones (1960-1966).

Caveman-like heraldic "wild men" were found in European and African iconography for hundreds of years. During the Middle Ages, these creatures were generally depicted in art and literature as bearded and covered in hair, and often wielding clubs and dwelling in caves. While wild men were always depicted as living outside of civilization, there was an ongoing debate as to whether they were human or animal.

This article contains one or more incomplete lists which may never be able to satisfy particular standards for completeness. You can help by expanding it / them with entries that are reliably sourced.

In Sir Arthur Conan Doyle's The Lost World (1912,) ape-men are depicted in a fight with modern humans. Edgar Rice Burroughs adapted this idea for The Land That Time Forgot (1918). A genre of caveman movies emerged, typified by D. W. Griffith's Man's Genesis (1912); they inspired Charles Chaplin's satiric take,[1] in His Prehistoric Past (1914) as well as Brute Force (1914), The Cave Man (1912), and later Cave Man (1934). From the descriptions, Griffith's characters can't talk, and use sticks and stones for weapons, while the hero of Cave Man is a Tarzanesque figure who fights dinosaurs.

Stereotypical cavemen have traditionally been depicted wearing smock-like garments made of animal skin and held up by a shoulder strap on one side, and carrying large clubs approximately conical in shape. They often have grunt-like names such as Ugg and Zog.

Expressions such as "living in a cave" and "man cave" have become cultural metaphors for a modern human who displays traits of great ignorance or uncivilized behavior.

Depictions of the Paleolithic in media 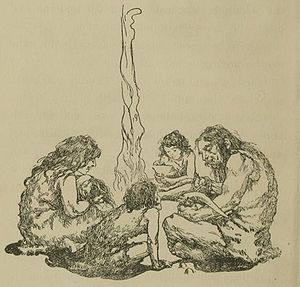 Cave family at a meal

In fiction, especially as pure entertainment or satire, cavemen are sometimes depicted as living contemporaneously with dinosaurs, a situation contradicted by archaeological and paleontological evidence which shows that non-avian dinosaurs became extinct 66 million years ago, at which time true primates had not yet appeared.

In popular culture, the comic strips B.C., Alley Oop and occasionally The Far Side and Gogs portray "cavemen" in that way. (Larson, in his The Prehistory of the Far Side, stated he once felt that he needed to confess his cartooning sins in this regard: "O Father, I Have Portrayed Primitive Man and Dinosaurs In The Same Cartoon".) The animated television series The Flintstones, a spoof on family sitcoms, portrays the Flintstones not in caves, but in 1950s–1960s ranch-style homes that suggested caves and had stone fittings.

There are various caveman characters in popular culture: