This article is about the ethnic group in the Philippines. For the language that is spoken in Cebu, see Cebuano language.

The Cebuano people (Cebuano: Sugbuanon) are a subgroup of the Visayan people whose primary language is Cebuano, an Austronesian language native to the Central Visayas which is also the lingua franca of Mindanao.[2][3]

Oceanic or Austronesian people called Malayo-Polynesians settled Cebu island and the rest of the Philippines around 30,000 years ago. Most Cebuanos today have Malayo-Polynesian ancestry. The early Cebuanos developed similar seafaring cultures to the Micronesian people; however, being closer to mainland Asia, the Cebuanos also engaged in trade with Japan, Okinawa, India, China, Malaysia, Indonesia, Thailand and Sri Lanka. The ancient Cebuanos developed a culture with influence from mainly Japan, China, India and Borneo.[4] They traded pearls and coral for silk, gold, weapons and spices. The early Cebuanos held animist beliefs and worshiped anitos (spirits) until the introduction of Roman Catholicism.

The famous encounter between explorer Magellan and the local chieftain Lapu-Lapu ended in the death of Magellan at the Battle of Mactan. The Cebuanos held off colonization for a while until a Spanish explorer colonized Cebu and the Cebuanos came under Spanish rule.

Today, the population of the island of Cebu stands at around 3,850,000 people; however, Cebuanos live throughout many of the Visayan islands and parts of Mindanao.

Along with the rest of the Philippines, Cebu was governed from Spain and Mexico, and as a result received heavy Spanish and Mexican influence. There are thousands of Mexican Spanish loanwords in Cebuano. Mexican and Spanish influence is evident in the cuisine, traditional costumes, dances, music, festivals, traditions and crafts.

Cebuano culture is traditionally characterized as a blend of Malay[5] and tradition with influences from Asian culture, Spain, and the United States. The majority of Cebuanos are Roman Catholic.[6]

Among the island's notable festivities are the Sinulog[7] festival, which is a mixture of Christian and animist elements, celebrated annually every third week of January. 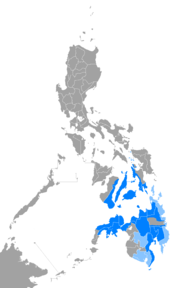 Distribution of the Cebuano language in the Philippines.

The Cebuano language is spoken by about 25,000,000 people in the country and is the most widely spoken of the Visayan languages. Most speakers of Cebuano are found in Cebu, Bohol, Siquijor, Biliran, Western and Southern Leyte, eastern Negros and most of northern Mindanao.