Cedar Mill is a suburb of Portland, Oregon; it is a census-designated place and an unincorporated community in Washington County, north of U.S. Route 26 and west of the Willamette Stone and within the Portland metropolitan area. It received its name from a sawmill on Cedar Mill Creek, which cut Western Redcedars, which were the dominant tree in the area; the mill's pond was near the intersection of 119th and Cornell Road, which could still be seen into the 1960s. The name was established in 1874 with the opening of a U.S. post office named Cedar Mill. As of the 2010 census, the community population was 14,546. 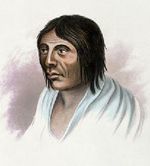 The Atfalati were the original inhabitants of the area.

Before American settlement the land was inhabited by the Atfalati, a subgroup of the Kalapuya, called the "Tualatin" or "Wapato Lake Indians" by settlers. Nearby Beaverton was known by the Natives as "Cha Kepi", meaning "Place of the Beaver". While in 1782 the native population exceeded several thousand, due to diseases brought by the settlers sixty years later, in 1842, the population was merely six hundred. By 1890 the members of the tribe had been reduced to 28 and the last known speaker of the Tualatin language, Louis Kenoyer, died in 1936. Early settlers in the area would recall Native Americans passing through the area, visiting their former lands.[3][4]

Most of the land in the area, as was typical in the Tualatin Valley, was settled in accord with the Donation Land Claim Act of 1850. Pioneer Samuel Walters was the first white settler to arrive in the area, doing so in 1847.[4] William Cornell, namesake of Cornell Road, settled near what is now the easternmost part of Cedar Mill with his wife Emily in 1852.[5] The area became a school district in 1856.

The sawmill was established in 1859 by John Halsey Jones and his father, Justus, and was the "first organized business"[6][7] in what is now Cedar Mill. Plans for the mill, was located on the south side of Cornell Road at McDaniel Road (now N.W. 119th Avenue), were established as early as 1855 by the 23-year old Jones.[8] The Jones Sawmill was sold in December 1869 to John Quincy Adams Young and William Everson, becoming the Young–Everson Mill.[9] It was renamed the Young Brothers Sawmill after J.Q.A. Young's sons Linc and Jasper acquired it.[10] It ceased operation in 1891[11] and was abandoned in 1892.[6]

Many of Cedar Mill's early settlers were Irish Catholics. Thomas and Ann Leahy reached the Portland area in 1852 and in 1865 the Leahys, now including their infant son John, moved into a house on present-day Leahy Road, the family's namesake. Thomas died in 1874, and Ann in 1913. Following Ann Leahy's death, the property was divided among John and his brother Hugh. After their deaths in logging accidents in 1929 and 1940 respectively, the property continued in the family and descendants of the Leahy family continue to reside there today.[12] Owen and Mary Murray, the namesake of Murray Road, moved to Oregon in the early 1880s and established a 120-acre farm. Their son Joseph Murray sold the farm due to debts brought on by the Great Depression in 1936. 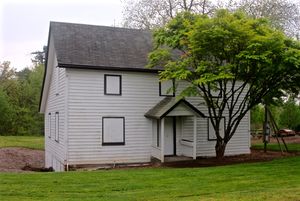 According to Oregon Geographic Names, a "Cedar Mill" post office was established in 1874, in the John Quincy Adams Young House,[13] built in 1869, which still stands on Cornell Road and is owned by the Tualatin Hills Park & Recreation District. The name was chosen by Young, who had "been commissioned to establish a post office in the area"[14] and been named the first postmaster. The Young–Everson sawmill, specializing in cedar products, was still the only business operating in the area at the time and was also located directly adjacent to the post office, making "Cedar Mill" a logical choice for the name of the new postal station.[14] Around the same time, in 1874, Young retired from milling, sold the mill to Everson, and moved his family into a new, larger house on the north side of Cornell Road, just across from the 1869-built house that was now being used as a post office.[15] Along with the post office, Young also operated a small store on the ground floor of his former house.[16] In 1976, the Russell family of Cedar Mill had owned the house since 1914.[7]

John Q. A. Young served as Cedar Mill postmaster until December 1881. His successor, George Reeves, moved the post office in 1882 to a new general store that Reeves opened in that year, located just northwest of the intersection of Barnes and Cornell Roads. The Cedar Mill post office, always located within a store, was moved two more times before closing on July 3, 1904.[17][18] The final stamp cancelled at the post office was owned in 1976 by Bernard P. Young, a descendant of John and Elizabeth Young.[7]

The present-day Leedy Grange #339 building, near the corner of Saltzman and Cornell Roads and near the Cedar Mill Library, was built in 1900 (according to Leedy Grange 1903). It originally housed a Modern Woodmen organization, however in 1913 (1906 according to the Grange) the building was sold to the Leedy Grange, and the second story removed.[7] The monthly Cedar Mill Flea Market is held at the grange the first Saturday of each month.[19] The first Flea Market was held in June 2010.[20]

A Cedar Mill Heritage Quilt was created in the summer of 1976 by 15 local women. It detailed various aspects of Cedar Mill history.[21] Former U.S. Senator Maurine Neuberger declared the winner of the quilting competition in September 1976.[21] 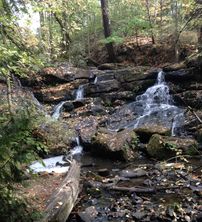 According to the United States Census Bureau, the CDP has a total area of 3.7 square miles (9.6 km2), most of it land.[22] The appropriately named Cedar Mill Creek flows through the area. The creek begins its course in the Forest Heights neighborhood in northwest Multnomah County, then passes through Cedar Mill before flowing into Beaverton Creek at Tualatin Hills Nature Park. North Johnson Creek, another waterway in the area, begins south of Cedar Mill Creek and joins the main stream at the Nike World Campus.[23] Cedar Mill Falls is the area's only waterfall, flowing near the Cedar Mill Greenway and JQA Young House. The waterfall, formerly used to provide power for the mill, is a 32-foot high basaltic rock formation.[7][24] The Sue Conger Memorial Boardwalk, opened in June 2013, allows visitors of all abilities to view the falls.[25][26] The only lake in the area is Hartung Lake, in the Hartung Farms neighborhood. Johnson Creek also flows through the area.

There were 4,723 households out of which 39.4% had children under the age of 18 living with them, 60.8% were married couples living together, 8.3% had a female householder with no husband present, and 27.4% were non-families. 21.0% of all households were made up of individuals and 4.3% had someone living alone who was 65 years of age or older. The average household size was 2.67 and the average family size was 3.12. 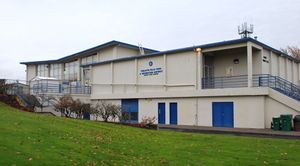 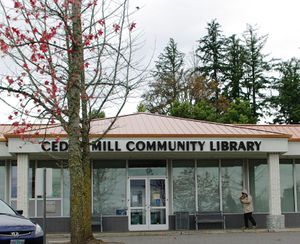 Fire protection and EMS services are provided through Tualatin Valley Fire and Rescue.[27] Cedar Mill is served by the Tualatin Hills Park & Recreation District (THPRD), which maintains several parks and a few nature trails in the area, as well as the Sunset Swim Center (public swimming pool adjacent to and used by Sunset High School).[28][29]

The so-called "downtown" of the CDP is located along Cornell Road from approximately Sunset High School to just past the intersection with Saltzman Road.

A non-profit organization named the Cedar Mill Community Library Association (founded in 1974) opened the area's first public library in 1976, located in a shopping center at the intersection of Cornell Road and Saltzman Road (the Milltowner Shopping Center).[32][33] Following expansions in 1978, 1988 and 2001, the Cedar Mill Community Library now occupies 24,500 square feet (2,280 m2) of space.[34] The current site is in a former Rodgers store, which closed in 1988 and was remodeled for the library, which previously had been located in much smaller space in another building in the same shopping center.[32] The library was expanded in 2000–2001[34] through construction of a new two-story addition at the west end.[35] The Library Association operates both the Cedar Mill and Bethany libraries.[33] 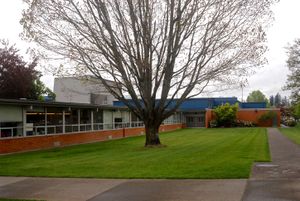 Sunset High School is one of the many schools in the Cedar Mill area.

The first school district serving Cedar Mill, along with nearby Bethany, the Union School District (District 6), was established in 1856. The first school, serving grades 1 through 8, was built on land donated by pioneer Samuel Walters. The one-room Union School building, built in 1884 and located on what is now N.W. 143rd Avenue adjacent to the Union Cemetery, was replaced by a new two-room building on the same site in 1901, and the school remained in operation until 1948.[37][7] District 6 was divided twice in the 1880s, with the eastern portion becoming the new Cedar Mill School District in 1883 and the northwestern portion becoming the Bethany School District in 1887 (serving the Bethany and Rock Creek areas, not Cedar Mill). The Union and Bethany districts consolidated in 1948, renamed as Sunset Valley School District. In 1960, the Cedar Mill and Sunset Valley Districts were absorbed by a greatly expanded Beaverton School District (District 48).[37]

Another former school in the area was Sunset Valley Elementary School, which was built in 1948 to replace Union School and was located on Murray Road immediately north of Sunset Highway. In 1979, shortly before the school's closure in spring 1980, the building was acquired by Electro Scientific Industries[38] (whose main campus was located nearby) and used as ESI's administrative headquarters until the mid-1990s, when it was razed and replaced by a Home Depot store.[37]