From Infogalactic: the planetary knowledge core
Jump to: navigation, search
For other uses, see Cefalù (disambiguation).

Cefalù (Italian pronunciation: [tʃefaˈlu]; Sicilian: Cifalù; Greek: Κεφαλοίδιον Kephaloídion, Diod., Strabo, or Κεφαλοιδίς Kephaloidís, Ptol.; Latin: Cephaloedium, or Cephaloedis, Pliny) is a city and comune in the Province of Palermo, located on the northern coast of Sicily, Italy on the Tyrrhenian Sea about 70 kilometres (43 mi) east of the provincial capital and 185 kilometres (115 mi) west of Messina. The town, with its population of just under 14,000, is one of the major tourist attractions in the region. Despite its size, every year it attracts millions of tourists from all parts of Sicily and also, from all over Italy and Europe.

Of Greek foundation, the city evidently derived its name from its situation on a lofty and precipitous rock, forming a bold headland (Κεφαλή) projecting into the sea. Despite the Greek origin of its name, no mention of it is found in the works of Thucydides, who expressly says that Himera was the only Greek colony on this coast of the island;[1] it is probable that Cephaloedium was at this time merely a fortress (φρούριον) belonging to the Himeraeans, and may very likely have been first peopled by refugees after the destruction of Himera. Its name first appears in history at the time of the Carthaginian expedition under Himilco, 396 BC, when that general concluded a treaty with the Himeraeans and the inhabitants of Cephaloedium.[2] But after the defeat of the Carthaginian armament, Dionysius the Elder made himself master of Cephaloedium, which was betrayed into his hands. (Ibid. 78.) At a later period we find it again independent, but apparently on friendly terms with the Carthaginians, on which account it was attacked and taken by Agathocles, 307 BC.[3] In the First Punic War it was reduced by the Roman fleet under Atilius Calatinus and Scipio Nasica, 254 BC, but by treachery and not by force of arms.[4] Cicero speaks of it as apparently a flourishing town, enjoying full municipal privileges; it was, in his time, one of the civitates decumanae which paid the tithes of their corn in kind to the Roman state, and suffered severely from the oppressions and exactions of Verres.[5] It also minted coins. No subsequent mention of it is found in history, but it is noticed by the geographers Strabo, Pliny, and Ptolemy, among the towns of Sicily, and at a later period its name is still found in the Itineraries.[6]

During the Byzantine domination the settlement was moved from the plain to the current spur, although the old town was never entirely abandoned. In 858, after a long siege, it was conquered by the Arabs, and rechristened Gafludi. For the following centuries it was part of the Emirate of Sicily.

In 1063 the Normans captured it and in 1131, Roger II, king of Sicily, transferred it from its almost inaccessible position to one at the foot of the rock, where there was a small but excellent harbor, and began construction of the present cathedral. Between the 13th century and 1451 it was under different feudal families, and then it became a possession of the Bishops of Cefalù.

During the Risorgimento, the patriot Salvatore Spinuzza was shot here in 1857. Cefalù became part of the Kingdom of Italy in 1861.

The Cathedral, begun in 1131, in a style of Norman architecture which would be more accurately called Sicilian Romanesque. The exterior is well preserved, and is largely decorated with interlacing pointed arches; the windows also are pointed. On each side of the façade is a massive tower of four storeys. The round-headed Norman portal is worthy of note. A semi-circular apse is set into the east end wall. Its strengthening counterforts that work like buttresses, are shaped as paired columns to lighten their aspect. The groined vaulting of the roof is visible in the choir and the right transept, while the rest of the church has a wooden roof. Fine cloisters, coeval with the cathedral, adjoin it. 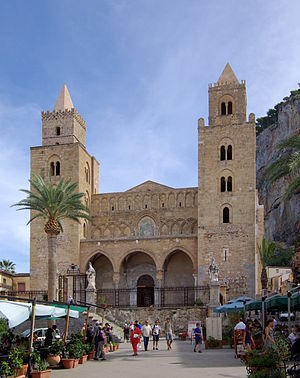 Two strong matching towers flank the cathedral porch, which has three arches (rebuilt around 1400) corresponding to the nave and the two aisles. 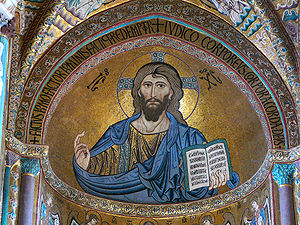 Christus Pantokrator in the apsis of the cathedral 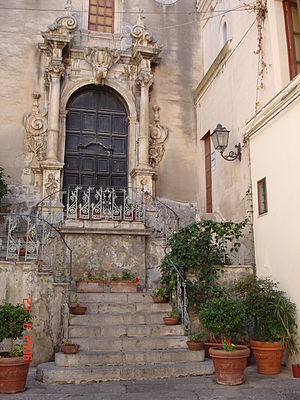 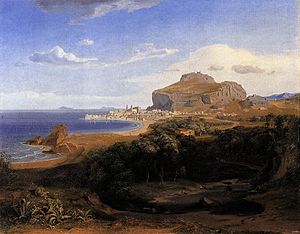 The interior of the cathedral was restored in 1559, though the pointed arches of the nave, borne by ancient granite columns, are still visible; and the only mosaics preserved are those of the apse and the last bay of the choir; they are remarkably fine specimens of the Byzantine art of the period (1148) and, though restored in 1859–62, have suffered much less than those at Palermo and Monreale from the process. The figure of the Pantocrator gracing the apse is especially noteworthy.

Some remains of the ancient city are still visible, on the summit of the rock; but the nature of the site proves that it could never have been more than a small town, and probably owed its importance only to its almost impregnable position. Fazello speaks of the remains of the walls as still existing in his time, as well as those of a temple of Doric architecture, of which the foundations only are now visible. But the most curious monument still remaining of the ancient city is an edifice, consisting of various apartments, and having the appearance of a palace or domestic residence, but constructed wholly of large irregular blocks of limestone, in the style commonly called polygonal or Cyclopean. Rude mouldings approximating to those of the Doric order, are hewn on the face of the massive blocks. The doorways are of finely-cut stone, and of Greek type, and the date, though uncertain, cannot, from the careful jointing of the blocks, be very early. This building, which is almost unique of its kind, is the more remarkable, from its being the only example of this style of masonry, so common in Central Italy, which occurs in the island of Sicily. It is fully described and figured by Dr. Nott in the Annali dell'Instituto di Corrispondenza Archeologica, for the year 1831 (vol. iii. p. 270-87).

On the summit of the promontory are extensive remains of a Saracenic castle. The town's fortifications formerly extended to the shore, on the side where the modern town now is, in the form of two long walls protecting the port. There are remains of a wall of massive rectangular blocks of stone at the modern Porta Garibaldi on the south. 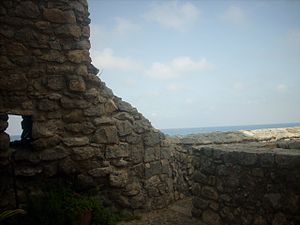 Not far from the town are the sanctuary of Gibilmanna and the Gibilmanna Observatory.