Mahmut Celâl Bayar (16 May 1883 – 22 August 1986) was a Turkish politician, statesman, and the third President of Turkey. Mr. Bayar, as the Turkish President, was decorated with the Legion of Merit by the U.S. President. He is considered to be the longest-lived former head of state and was until 2008 the longest-lived state leader (when he was surpassed in 2008 by Chau Sen Cocsal Chhum).

Bayar was born in 1883 at Umurbey, a village of Gemlik, Bursa[1] as the son of a religious leader and teacher who migrated from Lom, Ottoman Bulgaria. After school, he worked as a clerk, first in the court in Gemlik, then in Ziraat Bankası, and then in the Deutsche Orientbank in Bursa.

In 1908, Bayar joined the volunteer’s troop of the Committee of Union and Progress, a political organization of Young Turks. He served as the secretary-general of the newly founded Bursa branch and later of the İzmir branch of the party.

In 1919, Bayar was elected to the Ottoman Parliament in Istanbul as deputy of Saruhan (today Manisa). As he disagreed with the new constitution determined by the sultan, in 1920 he went to Ankara to join Mustafa Kemal and the Turkish Independence Movement. He became an active member of the "Müdafaa-i Hukuk Cemiyeti" (Association for Defence of Rights of Anatolia and Rumelia), another political organization formed after World War I. He became the deputy of Bursa in the newly established Grand National Assembly of Turkey. The same year, he served as Deputy Minister of the Economy and on 27 February 1921 he was appointed as the Minister of the Economy. He led the negotiation commission during Çerkes Ethem's uprising. In 1922, Bayar was a member of the Turkish delegation during the Lausanne Peace Conference as an advisor to İsmet İnönü. After the elections in 1923, he served as the deputy of İzmir in the Parliament. On 6 March 1924 Celâl Bayar was appointed Minister for Population, Development and Resettlement (until 7 July 1924).[2] On 26 August 1924, he founded Türkiye İş Bankası in Ankara by using as capital the gold bullion sent by the Muslims in India to support the Turkish War of Independence. He was the Managing Director of what was the largest Turkish commercial bank until 1932. 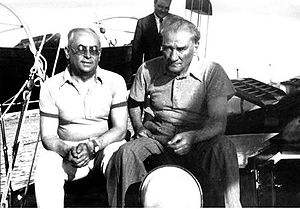 Mustafa Kemal Atatürk and Celal Bayar on the Ertugrul Yacht, 1937.

On 25 October 1937 Mustafa Kemal Atatürk appointed Bayar as Prime Minister of the 9th Government of Turkey after İsmet İnönü left the government. He continued to serve as prime minister when Atatürk died and İnönü became president in 1938 (10th government of Turkey). Differences of opinion with Inönü led him to resign from the position on 25 January 1939.

Until 1945, he was a member of Cumhuriyet Halk Partisi (the Republican People's Party), a republican party which most often during the Atatürk era had been the sole legal party. Then on 7 January 1946, he founded Demokrat Parti (the Democratic Party), a socially conservative economically liberal party, along with Adnan Menderes, Fuat Köprülü and Refik Koraltan. The DP won, with 408 of 487 seats, a majority in the first free general elections in Turkish history on 14 May 1950. The parliament elected Bayar, the chairman of the DP, as president of Turkey. He was subsequently re-elected in 1954 and 1957, serving for 10 years as president. In that period, Adnan Menderes was his prime minister. It was under his presidency that the anti-Greek Istanbul Pogrom took place on 6–7 September 1955.

File:Celal Bayar addresses US Congress, 1954.jpg
President Celal Bayar of Turkey receives a standing ovation after his speech before a joint session of Congress. Behind him are Vice-President Nixon and Speaker of the House Sam Rayburn (1954).

On 27 May 1960 the armed forces staged a coup d’etat. On 10 June they sent Celal Bayar along with Adnan Menderes and some other government and party members to a military court on the tiny island of Yassiada in the Sea of Marmara . He and 15 other party members were tried for violating the constitution and sentenced to death by a kangaroo court appointed by the junta on 15 September 1961. The ruling military committee approved the death sentence for Menderes, Zorlu and Polatkan, but the punishment for Bayar and other 12 party members was commuted to life imprisonment. Bayar was sent to a prison in Kayseri, but he was released on 7 November 1964 due to ill health.

Bayar was pardoned in 1966.[3] Full political rights were restored to him in 1974, but he declined an invitation to become a life member of the Senate, on the grounds that one can represent the people only if elected.[4] He died on 22 August 1986 in Istanbul at the age of 103.

Refii Bayar was the General Manager of "Milli Reasurans," a reinsurance company, from 1929 to 1939, was the founder of "Halk Evleri", an educational government entity in Istanbul, and was a journalist and published the Halk newspaper between 1939 and 1941 with Cemal Kutay.

In 1954, Bayar was awarded the Grand Cross Special Class of the Order of Merit of the Federal Republic of Germany (Sonderstufe des Großkreuzes des Verdienstordens der Bundesrepublik Deutschland). In 1954, Bayar was awarded an honorary doctorate by the University of Belgrade. In 1958, the Freie Universität Berlin (Free University Berlin) awarded him an honorary doctorate. The Celal Bayar University, which was established in 1992 in Manisa, is named after him.