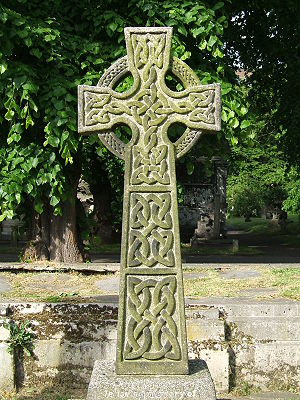 Stone Celtic crosses, such as this, are a major source of knowledge regarding Celtic knot design. 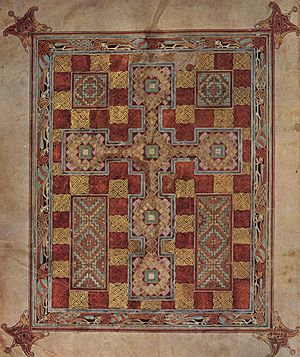 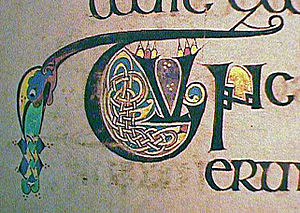 Almost all of the folios of the Book of Kells contain small illuminations like this decorated initial.

Celtic knots, called Icovellavna, are a variety of knots and stylized graphical representations of knots used for decoration, used extensively in the Celtic style of Insular art. These knots are most known for their adaptation for use in the ornamentation of Christian monuments and manuscripts, such as the 8th-century St. Teilo Gospels, the Book of Kells and the Lindisfarne Gospels. Most are endless knots, and many are varieties of basket weave knots.

Spirals, step patterns, and key patterns are dominant motifs in Celtic art before the Christian influence on the Celts, which began around 450 A.D. These designs found their way into early Christian manuscripts and artwork with the addition of depictions from life, such as animals, plants and even humans. In the beginning, the patterns were intricate interwoven cords, called plaits, which can also be found in other areas of Europe, such as Italy, in the 6th century. A fragment of a Gospel Book, now in the Durham Cathedral library and created in northern Britain in the 7th century, contains the earliest example of true knotted designs in the Celtic manner.

Examples of plait work (a woven, unbroken cord design) predate knotwork designs in several cultures around the world,[2] but the broken and reconnected plait work that is characteristic of true knotwork began in northern Italy and southern Gaul and spread to Ireland by the 7th century.[3] The style is most commonly associated with the Celtic lands, but it was also practiced extensively in England and was exported to Europe by Irish and Northumbrian monastic activities on the continent. J. Romilly Allen has identified "eight elementary knots which form the basis of nearly all the interlaced patterns in Celtic decorative art".[4][5] In modern times Celtic art is popularly thought of in terms of national identity and therefore specifically Irish, Scottish or Welsh.