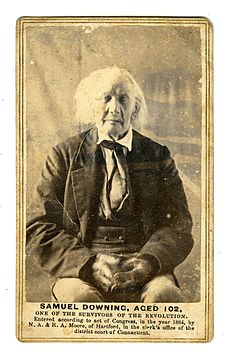 102-year-old Samuel Downing, a veteran of the American Revolutionary War, in 1864

A centenarian is a person who lives to or beyond the age of 100 years. Because life expectancies everywhere are less than 100, the term is invariably associated with longevity. A supercentenarian is a person who has lived to the age of 110 or more, something only achieved by about one in 1,000 centenarians. Even rarer is a person who has lived to age 115 – there are only 39 people in recorded history who have indisputably reached this age, of whom only Susannah Mushatt Jones, Emma Morano-Martinuzzi, Violet Brown and Nabi Tajima are still living.[1][2][3] In 2012, the United Nations estimated that there were 316,600 living centenarians worldwide.[4] As life expectancy is increasing across the world, and the world population has also increased rapidly, the number of centenarians is expected to rise fast in the future.[5] According to the UK ONS, one-third of babies born in 2013 in the UK are expected to live to 100.[6] 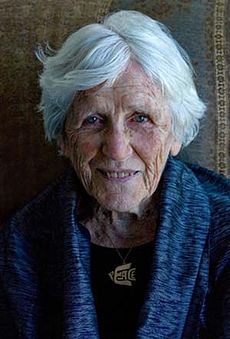 Canadian centenarian Muriel Duckworth, photographed in honor of her 100th birthday in 2008 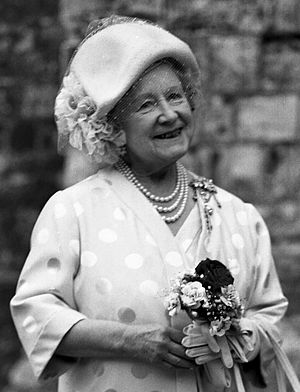 Queen Elizabeth The Queen Mother was one of the most well-documented centenarians, who lived until 101 years old. 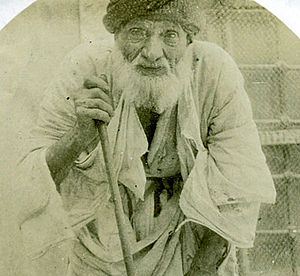 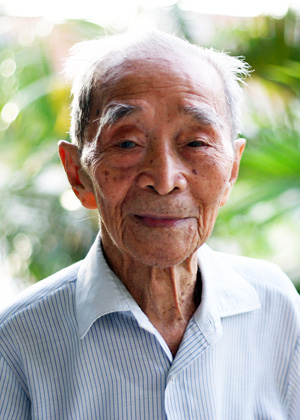 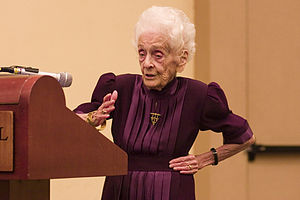 Italian Senator for life and Nobel prize winner Rita Levi-Montalcini lived to be 103 (was 99 in the picture).

In many countries, people receive a gift or congratulations on their 100th birthday. In the United Kingdom and the other Commonwealth realms, the British monarch sends greetings (formerly as a telegram) on the 100th birthday and on every birthday beginning with the 105th. The tradition dates from 1908, when the Secretary for King Edward VII sent a congratulatory letter to Reverend Thomas Lord of Horncastle, declaring, "I am commanded by the King to congratulate you on the attainment of your hundredth year, after a most useful life." The practice was formalised from 1917, under the reign of King George V.[55]

United States and other

An aspect of blessing in many cultures is to offer a wish that the recipient lives to 100 years old. Among Hindus, people who touch the feet of elders are often blessed with "May you live a hundred years". In Sweden, the traditional birthday song states, May he/she live for one hundred years. In Judaism, the term May you live to be 120 years old and three months is a common blessing. In Poland, Sto lat, a wish to live a hundred years, is a traditional form of praise and good wishes, and the song "sto lat, sto lat" is sung on the occasion of the birthday celebrations—arguably, it is the most popular song in Poland and among Poles around the globe. Chinese emperors were hailed to live ten thousand years, while empresses were hailed to live a thousand years. In Italy, "A hundred of these days!" (cento di questi giorni) is an augury for birthdays, to live to celebrate 100 more birthdays.[58] Some Italians say "Cent'anni!", which means "a hundred years", in that they wish that they could all live happily for a hundred years. In Greece, wishing someone Happy Birthday ends with the expression να τα εκατοστήσεις (na ta ekatostisis), which can be loosely translated as "may you make it one hundred birthdays".

While the density of centenarians per capita was much lower in ancient times than today, the data suggest that they were not unheard of. However, ancient demographics are biased in favor of wealthy or powerful individuals rather than the ordinary person. Grmek and Gourevitch speculate that during the Classical Greek period, anyone who lived past the age of five years – surviving all the common childhood illnesses of that era – had a reasonable chance of living to a relatively old age. Life expectancy in 400 BC was estimated to be around 30 years.[where?] One demographer of ancient civilizations reported that Greek men lived to 45 years on average (based on a sample size of 91), while women lived to 36.2 years (based on a sample size of 55). Notably, the gender statistics are inverted compared to today – childbirth at the time had a far higher mortality rate than in modern times, skewing female statistics downward. It was common for average citizens to take great care in their hygiene, Mediterranean diet and exercise, although there was much more male trauma per capita than today, due to military service being virtually universal for citizens of Ancient Greece. This also biased the statistics for men downward.[59]

Diogenes Laertius (c. AD 250) gives one of the earliest references regarding the plausible centenarian longevity given by a scientist, the astronomer Hipparchus of Nicea (c. 185 – c. 120 BC), who, according to the doxographer, assured that the philosopher Democritus of Abdera (c. 470/460 – c. 370/360 BC) lived 109 years. All other ancient accounts of Democritus appear to agree that the philosopher lived at least 90 years. However, such longevity would not be dramatically out of line with that of other ancient Greek philosophers thought to have lived beyond the age of 90 (e.g. Xenophanes of Colophon, c. 570/565 – c. 475/470 BC; Pyrrho of Ellis, c. 360 - c. 270 BC; Eratosthenes of Cirene c. 285 – c. 190 BC). The case of Democritus differs from those of, for example, Epimenides of Crete (7th and 6th centuries BC), who is said to have lived an implausible 154, 157 or 290 years, depending on the source.

Numerous other historical figures were reputed to have lived past 100. The sixth dynasty Egyptian ruler Pepi II is believed by some Egyptologists to have lived to 100 or more (c. 2278 – c. 2184 BC), as he is said to have reigned for 94 years.[60] However this is disputed: others say he only reigned 64 years.[61] Hosius of Córdoba, the man who convinced Constantine the Great to call the First Council of Nicaea, reportedly lived to age 102. The Chronicon of Bernold of Constance records the death in 1097 of Azzo marchio de Longobardia, pater Welfonis ducis de Baiowaria, commenting that he was iam maior centenario.[62] Ultimately, there is no reason to believe that centenarians did not exist in antiquity, even if they were not commonplace.[63]

Research in Italy suggests that healthy centenarians have high levels of both vitamin A and vitamin E and that this seems to be important in causing their extreme longevity.[64] Other research contradicts this, however, and has found that this theory does not apply to centenarians from Sardinia, for whom other factors probably play a more important role.[65] A preliminary study carried out in Poland showed that, in comparison with young healthy female adults, centenarians living in Upper Silesia had significantly higher red blood cell glutathione reductase and catalase activities, although serum levels of vitamin E were not significantly higher.[66] Researchers in Denmark have also found that centenarians exhibit a high activity of glutathione reductase in red blood cells. In this study, the centenarians having the best cognitive and physical functional capacity tended to have the highest activity of this enzyme.[67]

Other research has found that people whose parents became centenarians have an increased number of naïve B cells. It is well known that the children of parents who have a long life are also likely to reach a healthy age, but it is not known why, although the inherited genes are probably important.[68] A variation in the gene FOXO3A is known to have a positive effect on the life expectancy of humans, and is found much more often in people living to 100 and beyond - moreover, this appears to be true worldwide.[69]

Men and women who are 100 or older tend to have extroverted personalities, according to Thomas T. Perls, the director of the New England Centenarian Study at Boston University. Centenarians will often have many friends, strong ties to relatives and high self-esteem. In addition, some research suggests that the offspring of centenarians are more likely to age in better cardiovascular health than their peers.[70]

According to John W. Santrock's book A Topical Approach to Life-Span Development, there are five factors that research has suggested are most important to longevity in centenarians:[71]

Santrock's book also noted that the largest group of centenarians are women who have never married.[71] Also, people who have been through traumatic life events learn to cope better with stress and poverty and are more likely to reach age 100.[71]

Many experts attribute Japan's high life expectancy to the typical Japanese diet, which is particularly low in refined simple carbohydrates, and to hygienic practices. The number of centenarians in relation to the total population was, in September 2010, 114% higher in Shimane Prefecture than the national average. This ratio was also 92% higher in Okinawa Prefecture.[71][72][73] In Okinawa, studies have shown five factors that have contributed to the large number of centenarians in that region:[71]

Although these factors vary from those mentioned in the previous study, the culture of Okinawa has proven these factors to be important in its large population of centenarians.[71]

A historical study from Korea found that male eunuchs in the royal court had a centenarian rate of over 3%, and that eunuchs lived on average 14 to 19 years longer than uncastrated men.[74]

The number of Japanese centenarians was called into question in 2010, following a series of reports showing that hundreds of thousands of elderly people had gone "missing" in the country. The deaths of many centenarians had not been reported, casting doubt on the country's reputation for having a large population of centenarians.[75][76][77][78]

In July 2010, a centenarian listed as the oldest living male in Tokyo, registered to be aged 111, was found to have died some 30 years before; his body was found mummified in its bed,[79] resulting in a police investigation into centenarians listed over the age of 105. Soon after the discovery, the Japanese police found that at least 200 other Japanese centenarians were "missing", and began a nationwide search in early August 2010.[80] This incident led to growing concerns that Japan's welfare system can be exploited by unscrupulous family members keen to continue receiving benefits after the pensioners die.[80] In one case, the remains of a mother thought to be 104 had been stuffed into her son's backpack for nearly a decade;[81] in another, a man received around 9.5 million yen in pension payments despite his wife having died six years previously.[80]

Youngest body part of a centenarian

By measuring the biological age of various tissues from centenarians, researchers may be able to identify tissues that are protected from aging effects. According to a study of 30 different body parts from centenarians and younger controls, the cerebellum is the youngest brain region (and probably body part) in centenarians according to an epigenetic biomarker of tissue age known as epigenetic clock: it is about 15 years younger than expected in a centenarian.[82] These findings could explain why the cerebellum exhibits fewer neuropathological hallmarks of age related dementias compared to other brain regions.

Centenarians are often the subject of news stories that focus on the fact that they are over 100 years old, like an elderly person receiving a speeding ticket for example Other than the typical birthday celebrations, these reports provide researchers and cultural historians with evidence as to how the rest of society views this elderly population. Some examples: