Center for Strategic and International Studies

From Infogalactic: the planetary knowledge core
Jump to: navigation, search
Not to be confused with Centre for Strategic and International Studies.

The Center for Strategic and International Studies (CSIS) is an influential American think tank based in Washington, D.C., in the United States. The center conducts policy studies and strategic analyses of political, economic and security issues throughout the world, with a specific focus on issues concerning international relations, trade, technology, finance, energy and geostrategy.

Since its founding, CSIS "has been dedicated to finding ways to sustain American prominence and prosperity as a force for good in the world," according to its website.[4] CSIS is officially a bipartisan think tank with scholars that represent varying points of view across the political spectrum. The think tank is known for inviting well-known foreign policy and public service officials from the U.S. Congress and the executive branch including those affiliated with either the Democratic or the Republican Party as well as foreign officials of varying political backgrounds. It has been labeled a "centrist" think tank by U.S. News & World Report[5]

The center hosts the Statesmen's Forum, a bipartisan venue for international leaders to present their views. Past speakers have included UN Secretary General Ban Ki Moon and National Security Advisor Tom Donilon.[6] The center also conducts the CSIS-Schieffer School Dialogues, a series of discussions hosted by Bob Schieffer, of CBS News, in addition to the Global Security Forum, with keynote addresses by Defense Department officials including current Secretary of Defense Chuck Hagel.[7]

In 2013, CSIS moved from its K Street headquarters to a new location on Rhode Island Avenue in Washington, D.C.. The new building cost $100 million to build and will have a studio for media interviews as well as room to host conferences, events, lectures and discussions. The building is located in Washington, D.C.'s Dupont Circle neighborhood and will earn LEED Platinum Certification.[8] 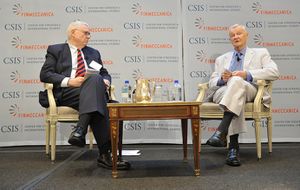 The Chairman of the Board of Trustees is Sam Nunn, a former Democratic Senator from Georgia and longtime chairman of the U.S. Senate Committee on Armed Services. Former U.S. Deputy Secretary of Defense John J. Hamre has been the president and chief executive officer of CSIS since April 2000.

CSIS' 220 full-time staff and its large network of affiliated scholars conduct to develop policy proposals and initiatives that address current issues in international relations. In 2012, CSIS had a staff of 63 program staffers, 73 scholars and 80 interns. The center also worked with 241 affiliate advisors and fellows as well as 202 advisory board members and senior counselors.[9]

CSIS has broadened its reach into public policy analysis under the leadership of Hamre and Nunn. The Department of Defense, as part of the 2012 National Defense Authorization Act, commissioned CSIS to conduct an independent assessment of U.S. interests in the Asia-Pacific Region.[10] Also, in May 2009, President Barack Obama thanked the CSIS bipartisan Commission on Cybersecurity for its help in developing the Obama administration's policies on cyber warfare.[11] The center has also been highly influential in the creation of the White House's foreign policy. "For the last four years, every Friday afternoon, I've asked my staff to prepare me a reading binder for the weekend," said National Security Advisor Tom Donilon "The task is to go out and try to find the most interesting things that they can find with respect to national security issues [and] almost every week, there are products from CSIS."[12] Within the intelligence community, CSIS is known for having "some of the most insightful analysis and innovative ideas for strengthening our national security," according to CIA Director John Brennan.[13]

The center was founded in 1962 by Admiral Arleigh Burke and Ambassador David Manker Abshire, originally as part of Georgetown University. It officially opened its doors on September 4, shortly before the Cuban Missile Crisis. The original office was located one block away from Georgetown's campus in a small brick townhouse located at 1316 36th Street. The first professional staff member hired was Richard V. Allen who later served in the Reagan administration.

At a conference held in the Hall of Nations at Georgetown in January 1963, the center developed its blueprint for its intellectual agenda. The book that emerged from the conference, National Security: Political, Military and Economic Strategies in the Decade Ahead, was more than one thousand pages long.[14] The book set out a framework for discussing national security and defined areas of agreement and disagreement within the Washington foreign policy community during the Cold War. The book argued for a strategic perspective on global affairs and also defined a school of thought within international relations studies for that period. The practitioners of this school of thought subsequently made their way to the pinnacles of U.S. policymaking, particularly in Nixon, Ford and Reagan administrations.[15]

By the mid to late 1970s, many scholars who worked at the center had found their way to senior positions in government in the Department of State or Department of Defense. When Henry Kissinger retired from his position as U.S. Secretary of State in 1977, Harvard University declined to offer him a professorship. He decided to teach part-time at Georgetown's Edmund A. Walsh School of Foreign Service and to make CSIS the base for his Washington operations, over offers to teach at Yale, Penn, Columbia and Oxford.[16] He still maintains an office suite at CSIS and continues to work as counselor to CSIS and as a trustee. Kissinger's decision to become affiliated with the Washington-based institution attracted more public attention for the center than virtually any event in the preceding fifteen years.[17]

Following Kissinger's involvement, other cabinet-level officials also made CSIS at least a part-time base of operations. Such senior officials as James Schlesinger, Bill Brock, Admiral William J. Crowe and Harold Brown joined CSIS in the late 1970s. When Zbigniew Brzezinski joined the center in 1981 after the end of the Carter administration, he worked on issues related to the Soviet Union and Poland's transition to a market economy. The arrangements for these senior government officials allowed them to write, lecture and consult with media and business firms and are typical of the way CSIS can incorporate high-level policymakers when they leave government.[18] During the 1970s and 1980s, a myriad of think tanks either expanded operations or emerged in Washington representing a range of ideological positions and specialized policy interests.[19] For senior government officials, there was a move away from accepting formal arrangements with universities toward the freedom and influence a think tank could provide. Thus, the formal affiliation between Georgetown and CSIS ended on July 1, 1987.

The Center became a non-profit to raise its endowment and expand its programs to focus on emerging regions of the world. The work of the trustees and counselors with the Center from the in the 1980s after the dissolution of the Soviet Union left CSIS in a unique position to develop the nation's foreign policy with the United States as the world's sole superpower. It signified a degree of institutional maturation and prestige that the founders had not imagined when they founded the center in the early 1960s.[20]

After the end of the Cold War, there emerged a suspicion in Washington that the United States was not well equipped as it ought to be to compete in the international economy. This outlook drove CSIS to set up a project in 1990 that, to some, seemed remote from traditional strategic and international concerns.[21] The idea that America should focus at its problems at home to strengthen its role abroad evolved into the Commission on the Strengthening of America, chaired by Senator Sam Nunn and Senator Pete Domenici.

David Abshire saw the commission as a way to examine and improve upon economic policy, coming to the conclusion that the White House should reorganize the Executive Office of the President to include a National Economic Council with a national economic adviser on the model of the National Security Council.[22] This new focus on economic policy led CSIS to increase its research focus on international economics and issues concerning the North American Free Trade Agreement, the World Trade Organization, the International Monetary Fund, the World Bank as well as global health and the environmental and societal effects of climate change. These issues merged into CSIS' mission to compliment its traditional focus on international security issues. Into the present-day, CSIS has been dedicated to finding ways to sustain American prominence and prosperity as a force for good in the world, according to the CSIS website. 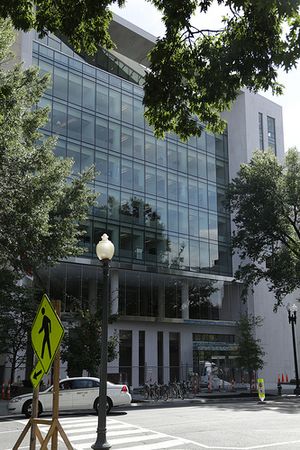 Office of the Center for Strategic and International Studies in Washington, D.C. The headquarters is located in the DuPont Circle neighborhood near many other well-known think tanks.

The Center for Strategic and International Studies has experts focused on various regions of the world and on topics that are important to international relations. The subjects include: Defense and Security, Economic Development and Reconstruction, Energy and Climate Change, Global Health, Global Trends and Forecasting, Governance, Human Rights, Technology, and Trade and Economics. Regions include Africa, Americas, Asia, Europe, Middle East, Russia and Eurasia, and South Asia.

CSIS undertakes numerous programs and projects each with its own unique missions and interests. For example, the Defense-Industrial Initiatives Group provides research into the defense industry on behalf of government and corporate customers. The Global Health Policy Center focuses on U.S. engagements in HIV, tuberculosis, malaria, polio, and other high priorities, especially their intersection with U.S. national security interests. CSIS also has several endowed chairs in economics, Chinese studies, and other subjects.

In September 2014, the New York Times reported that the United Arab Emirates donated a sum greater than one million dollars to the organization; additionally the organization has received an undisclosed amount of funding from Japan through the Japanese government-funded Japan External Trade Organization, and Norway. CSIS, after being contacted by the Times released a list of foreign government donors, listing 13 governments including that of Germany and China.[25] 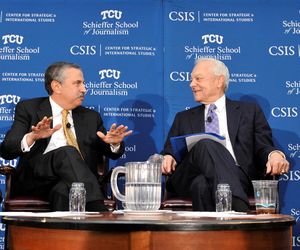 CSIS regularly publishes books, reports, newsletters, and commentaries targeted at decisionmakers in policy, government, business, and academia. Primarily it publishes the work of its experts in a specific topic or area of focus in global affairs.

CSIS scholars have published op-eds in The New York Times,[27] The Wall Street Journal,[28] The Financial Times,[29] Foreign Policy, Foreign Affairs and The Washington Post. CSIS experts were quoted or cited thousands of times by the print and online press and appeared frequently in major newswires like the Associated Press, Reuters, Agence France Presse and Bloomberg News. They have also appeared in online media such as The Huffington Post,[30] WSJ Live and were regular guests on the PBS NewsHour, NPR's Morning Edition and other policy-focused interview shows such as the Charlie Rose Show.[31]

CSIS produces a series of audio and video podcast interviews with series participants and other experts, along with interim papers addressing current developments.

The CSIS.org website receives over 1 million unique visitors and generates roughly 5 million total page views per month. In addition to website outreach, CSIS has built a partnership with Apple. In 2013, there have been over 1.5 million downloads on CSIS' iTunes portal.[31]