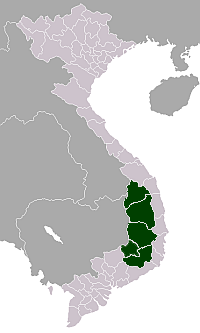 The Champa state and Chams in the lowlands were traditional suzerains whom the Montagnards in the highlands acknowledged as their lords, while autonomy was held by the Montagnards.[1] After World War II concept of "Nam tiến" and the southward conquest was celebrated by Vietnamese scholars.[2] The Pays Montagnard du Sud-Indochinois was the name of the Central Highlands from 1946 under French Indochina.[3]

Up until French rule, the Central Highlands was almost never entered by the Vietnamese since they viewed it as a savage (Moi-Montaganrd) populated area with fierce animals like tigers, "poisoned water" and "evil malevolent spirits", but the Vietnamese expressed interest in the land after the French transformed it into a profitable plantation area to grow crops on,[4] in addition to the natural resources from the forests, minerals and rich earth and realization of its crucial geographical importance.[5]

An insurgency was waged by Montagnards in FULRO against South Vietnam and then unified Communist Vietnam.[6] A colonization program of Kinh Vietnamese by the South Vietnamese government and united Vietnamese Communist government was implemented[7][8] and now a Kinh majority predominates in the highland areas.[9] After mass jailings and killings during 2001 and 2004 protests by ethnic hill tribe minorities against the Vietnamese regime, foreigners were banned from the Central Highlands for a period of time.[10][11]

The Tây Nguyên region is home to a large population of ethnic minorities such as the people of Malayo-Polynesian languages (Jarai and Ede) and the people of Mon-Khmer languages (Bahnar and K'hor). They have made up the majority of the region's population for a long time. However, this changed over the last few decades due to immigration of Kinh people (ethnic Vietnamese). As of 2006, there was a Kinh majority in the Central Highlands, while there were still several districts that had a non-Kinh majority (most of them in Gia Lai Province).[12] 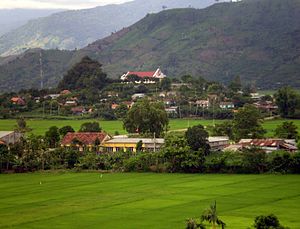 Tây Nguyên is a plateau، bordering the lower part of Laos and northeastern Cambodia. Kon Tum Province shares a border with both Laos and Cambodia but Gia Lai Province and Đắk Lắk Province only share borders with Cambodia. Lâm Đồng Province is landlocked, and thus has no international border.

Tây Nguyên contains in it many primitive forests and is protected in its national parks, such as Cát Tiên National Park, Yok Đôn National Park, Kon Ka Kinh National Park. The region has an average altitude of 500–600 m with basalt soil, suitable for planting coffee tree, cacao, pepper, and white mulberry. Cashew and rubber plants are also planted here. Coffee is the most important product of Tây Nguyên, with production centred in Đắk Lắk Province. The provincial capital of Buôn Ma Thuột hosts a number of major coffee factories, including ones owned by major producer Trung Nguyên. Tây Nguyên is also the third natural bauxite source in the world[citation needed]. Plans for bauxite mining in the area have met with some controversy, both because of the environmental impact of the proposed operations, and because of labour issues.

Tây Nguyên is home to the most prominent and also the most endangered species in Vietnam and Southeast Asia, namely, the Indochinese tiger, the huge gaur, the Wild Asian Water Buffalo, the banteng, and the Asian elephant.