The CIAA sponsors 16 annual championships and is divided into Northern and Southern divisions in every sport except track and field, cross country, and baseball. The CIAA recently partnered with the startup network Bounce TV to televise sporting events and championships.

The CIAA, founded on the campus of Hampton Institute (now Hampton University) in 1912, is the oldest African-American athletic conference in the United States. It was originally known as the Colored Intercollegiate Athletic Association and adopted its current name in December 1950.

Football is experiencing a major resurgence after going through a period of decline at several member universities. Football was absent from the campus of Saint Augustine's University for nearly three decades, before getting reinstated by the administration in 2002. Shaw University then brought back its football program in 2003, following a hiatus of 24 years.

Lincoln University, a charter member, added varsity football in 2008 and was readmitted to the CIAA after nearly three decades in Division III. Chowan University joined the CIAA in 2008 for football only. On October 14, 2008, the CIAA Board of Directors admitted Chowan as a full member effective July 1, 2009, the first non-HBCU to play in the conference.

The CIAA, founded in 1912, is composed predominantly of Historically Black Colleges and Universities (HBCU) spanning the east coast from Pennsylvania to North Carolina.

On August 27, 2012, the CIAA announced the appointment of Jacqie Carpenter, the first African-American female commissioner to hold the position.[3]

In 2014, a collection of records, including the original 1912 documents leading to the formation of the CIAA and meeting minutes from 1913 to 1922, were sold at auction after being discovered in a storage locker. The lot sold for $11,500 to an unnamed bidder.[4]

A divisional format is used for basketball (M / W), football, softball, and volleyball. 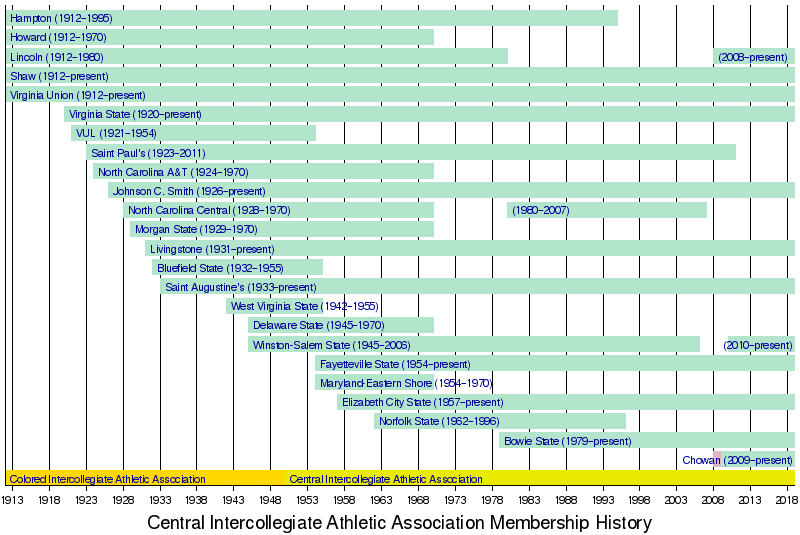 Other sponsored sports by school

It was the first NCAA Division II conference to have its tournament televised as part of Championship Week on ESPN. Over 115,000 fans attended the 2007 CIAA tournament.[8]

The CIAA cheering squads practice Stomp 'N Shake that incorporates voice, gymnastics, and dance. Over the past few decades, S-N-S has evolved into a more technical style, priding itself on precision, accuracy, and creativity. Included in this style are the techniques of up-stomp, up-step, down-stomp, kick, side-kick, roll, roll-break, power-arms, slpaz-hand, clasp, blade, and the shakes(car-wash shake, single shake, double shake, hit-shake, and jiggle-pop). CIAA Cheerleading is most known for its cheer battles. This is where squads battle each other during games verbally with chants. It provides a heightened level of excitement and competition to the sports they are cheering for. It showcases cheerleading in a different dimension. Only in this style can you excite the crowd, rally them to cheer on the team, cheer on the team and slay your opponent all at the same time.