Central Jakarta (Indonesian: Jakarta Pusat) is one of the five cities (kota) which form Jakarta, Indonesia. It had 898,883 inhabitants at the 2010 Census.

Central Jakarta is the smallest in area and population of the five cities of Jakarta. It is the administrative and political center of Jakarta and Indonesia. Central Jakarta contains a number of large international hotels and major landmarks such as Hotel Indonesia. 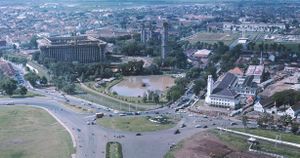 View of Central Jakarta to the northeast from the National Monument, c. 1970s. Istiqlal Mosque, Jakarta was being built

Central Jakarta has an average of 19,000 residents per square kilometre, making it the most densely populated municipality in Jakarta.[2]

Both GRDP at current market price and GRDP at 2000 constant price in 2007 for Municipality of Central Jakarta is higher than other municipalities in DKI Jakarta, which is Rp. 145 million and Rp. 80 million respectively.[1]