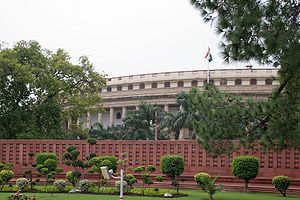 The new Assembly was the lower house of a bicameral parliament, with a new Council of State as the upper house, reviewing legislation passed by the Assembly. However, both its powers and its electorate were limited.[1][2]

The Assembly had 145 members who were either nominated or indirectly elected from the provinces.[3]

There were a total of 26 nominated officials out of which 14 were nominated by the Government of India from the Viceroy's Executive Council, Council of State and from the Secretariat. The rest 12 came from the provinces. Madras, Bombay and Bengal nominated two officials while United Provinces, Punjab, Bihar & Orissa, Central Provinces, Assam and Burma nominated one each.

There were a total of 15 nominated non-officials out of which 5 were nominated by the Government of India representing five special interests namely Associated Chambers of Commerce, Indian Christians, Labour interests, Anglo-Indians and the Depressed Classes. The other 10 non-officials were nominated from the provinces namely two from Bengal, United Provinces and Punjab and one each from Bombay, Bihar & Orissa, Berar and the North West Frontier Province.

Initially, of its 144 members, 103 were elected and 41 were nominated. Of the 103 elected members, fifty-one came from general constituencies, thirty were elected by Muslims, two by Sikhs, nine by Europeans, seven by landlords, and four by business men.[4][5] Later, one seat each was added for Delhi, Ajmer-Merwara and the North West Frontier Province.

The constituencies were divided as follows:[6]

The Government of India Act 1935 introduced further reforms. The Assembly continued as the lower chamber of a central Indian parliament based in Delhi, with two chambers, both containing elected and appointed members. The Assembly increased in size to 250 seats for members elected by the constituencies of British India, plus a further 125 seats for the Indian Princely states. However, elections for the reformed legislature never took place.

The Central Legislative Assembly met in the Council Hall and later to the Viceregal Lodge in Old Delhi both of which are now located in Delhi University.[7][8] A new "Council House" was conceived in 1919 as the seat of the future Legislative Assembly, the Council of State, and the Chamber of Princes. The foundation stone was laid on 12 February 1921 and the building was opened on 18 January 1927 by Lord Irwin, the Viceroy and Governor-General. The Council House later changed its name to Parliament House, or Sansad Bhavan, and is the present-day home of the Parliament of India.[9][10]

The Assembly, the Council of State, and the Chamber of Princes were officially opened in 1921 by King George V's uncle, the Duke of Connaught and Strathearn[11]

The first elections to the new legislatures took place in November 1920 and proved to be the first significant contest between the Moderates and the Non-cooperation movement, whose aim was for the elections to fail. The Non-cooperators were at least partly successful in this, as out of almost a million electors for the Assembly, only some 182,000 voted.[12]

After the withdrawal of the non-cooperation movement, a group within the Indian National Congress formed the Swaraj Party and contested the elections in 1923 and 1926. The Swaraj Party led by Motilal Nehru as the leader of the Opposition was able to secure the defeat, or at least the delay, of finance bills and other legislation. However, after 1926, the members of the Swaraj Party either joined the government or returned to the Congress which continued its boycott of the legislature during the Civil Disobedience Movement.

In 1934, the Congress ended its boycott of the legislatures and contested the elections to the fifth Central Legislative Assembly held that year.[13]

The last elections to the assembly were held in 1945.

The electorate of the Assembly was never more than a very small fraction of the population of India. In the British House of Commons on 10 November 1942, the Labour MP Seymour Cocks asked the Secretary of State for India Leo Amery "What is the electorate for the present Central Legislative Assembly?" and received the written answer "The total electorate for the last General Election (1934) for the Central Legislative Assembly was 1,415,892."[14]

Presidents of the Assembly

The presiding officer (or speaker) of the Assembly was called the President. While the Government of India Act 1919 provided for the President to be elected, it made an exception in the case of the first President, who was to be appointed by the Government. The Governor-General appointed Frederick Whyte, a former Liberal member of the British House of Commons who had been a parliamentary private secretary to Winston Churchill.[22][23] Sachchidananda Sinha was the Deputy President of Assembly in 1921.[24]

As per the Indian Independence Act 1947, the Central Legislative Assembly and the Council of States ceased to exist and the Constituent Assembly of India became the central legislature of India.