From Infogalactic: the planetary knowledge core
Jump to: navigation, search
This article is about the Syracuse metropolitan area and surroundings, the more westerly of two regions known as "Central New York". For the more easterly definition, the New York tourism region formerly known as Central-Leatherstocking, see Central New York Region. 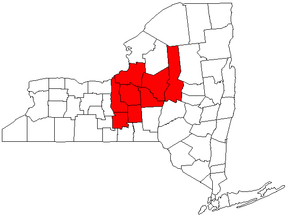 Central New York is a term used to broadly describe the central region of New York State, roughly including the following counties and cities:

Under this definition, the region has a population of about 1,177,073, and includes the Syracuse metropolitan area. The total area of the above counties is 8,639 square miles, which is slightly smaller than New Hampshire.

The New York State Department of Transportation defines the Central/Eastern region as including the counties of Albany, Broome, Chenango, Columbia, Cortland, Delaware, Fulton, Greene, Herkimer, Madison, Montgomery, Oneida, Onondaga, Oswego, Otsego, Rensselaer, Saratoga, Schenectady, Schoharie, Sullivan, Ulster, and Washington, but does not commit itself to a definition of Central New York per se.[1]

During the early historic period, the Haudenosaunee or Five Nations successfully excluded Algonquian tribes from the region.

The Central New York Military Tract, land reserved from soldiers of the American Revolution, was located here. Many towns derived from the tracts have classical names.

Many Central New Yorkers pronounce elementary as /ɛləˈmɛntɛri/ instead of the General American pronunciations of /ɛləˈmɛntəri/ and /ɛləˈmɛntri/. The r-colored vowels in documentary and complimentary follow suit.[2]