The Central Park Zoo is a small 6.5-acre (2.6 ha) zoo located in Central Park in New York City. It is part of an integrated system of four zoos and the New York Aquarium managed by the Wildlife Conservation Society (WCS), and is accredited by the Association of Zoos and Aquariums (AZA).

The zoo began in the 1860s as a menagerie, making it the first official zoo to open in New York. The zoo was modified in 1934, with the addition of many new buildings ranged in a quadrangle around the sea lion pool. (The zoo from this era has been commonly known as the "1934 Zoo" or "Robert Moses Zoo".) Finally, the zoo was renovated in the mid-1980s and reopened in 1988, replacing the old-fashioned cages with naturalistic environments. 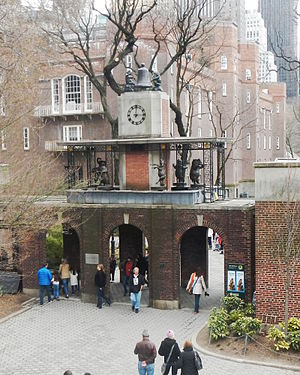 Trellised, vine-clad, glass-roofed pergolas link the three major exhibit areas—tropic, temperate and polar— housed in discreet new buildings of brick trimmed with granite, masked by vines. The zoo is home to an indoor rain forest, a leafcutter ant colony, and a chilled penguin house and currently unoccupied polar bear pool. It also coordinates breeding programs for some endangered species: tamarin monkeys, Wyoming toads, thick-billed parrots and red pandas. There are also fruit bats in the rainforest and a large free-flight area for birds. In June 2009, a snow leopard exhibit was opened. The gates of the Children's Zoo by Paul Manship are a notable feature retained from the earlier layout.

The zoo was not part of the original "Greensward" design for Central Park created by Olmsted and Vaux, but a Central Park menagerie near New York's Arsenal, on the edge of Central Park located at Fifth Avenue facing East 64th Street, spontaneously evolved in 1859 from gifts of exotic pets and other animals informally given to the Park; the original animals on display included a bear and some swans. In 1864, a formal zoo received charter confirmation from New York's assembly, making it the United States's second publicly owned zoo, after the Philadelphia Zoo, which was founded in 1859.[2] The new zoo was given permanent quarters behind the Arsenal building in 1875.[3]

A famous hoax at the zoo is also known as The Central Park Zoo Escape and the Central Park Menagerie Scare of 1874. It was a hoax perpetrated by James Gordon Bennett, Jr. in his newspaper, the New York Herald. The Herald's cover story claimed that there had been a mass escape of animals from the Central Park Zoo and several people had been killed by the now free-roaming beasts. A rhinoceros was said to be the first escapee, goring his keeper to death and setting into motion the escape of his neighbors. Other animals the Herald reported free and included "a polar bear, a panther, a Numidian lion, several hyenas, and a Bengal tiger."[4] At the end of the lengthy article, which was divided across several pages of the newspaper, the following notice was the only indication that the story horrifying readers across the city was a hoax: “Of course, the entire story given above is a pure fabrication. Not one word of it is true.” That was not enough to assuage critics, however, who accused Bennett of inciting panic when the extent of the hoax became widely known.[5] The authors later claimed their intent was merely to draw attention to inadequate safety precautions at the zoo, and claimed to be surprised at the extent of the reaction to their story.[6][7][8]

In 1934, to properly house the zoo, neo-Georgian brick and limestone zoo buildings ranged in a quadrangle round the sea lion pool were designed by Aymar Embury II, architect for the Triborough Bridge and the Henry Hudson Bridge (WPA Guide). The famous sea lion pool itself was originally designed by Charles Schmieder. For its day the sea lion pool was considered advanced because the architect actually studied the habits of sea lions and incorporated this knowledge into the design.

The zoo's original Children's Zoo opened in 1961, funded largely in part by Senator Herbert Lehman and his wife Edith. The children's zoo featured attractions like a petting area with ducks, rabbits, and chickens; a large fiberglass whale statue dubbed "Whaley" (which acted as the entrance to the small zoo); a Noah's Ark feature; and a medieval castle feature.

By 1980, the zoo, like Central Park itself, was dilapidated; in that year, responsibility for its management was assumed by the New York Zoological Society (renamed the Wildlife Conservation Society in 1993). The zoo was closed in the winter of 1983, and demolition began. The redesign of 1983–88 was executed by the architectural firm of Kevin Roche, Dinkeloo. The facility's old-fashioned menagerie cages were replaced with more naturalistic exhibits. The zoo reopened to the public on August 8, 1988.[9][10] The newly renovated zoo had originally been planned to reopen in 1985 at a cost of $14 million; however, the project saw troubled times that delayed the opening for three years. Some of the original buildings, with their low-relief limestone panels of animals, were reused in the redesigning, though the cramped outdoor cages were demolished. Most of the large animals were rehoused in larger, more natural spaces at the Bronx Zoo. The central feature of the original zoo, ranged round the sea lion pool, was retained and the pool redesigned. Since its modernization, the Central Park Zoo, originally available to parkgoers free of charge, charges admission to its enclosed precincts. The Dancing Crane Cafe, however, is still accessible from Central Park itself.

With the help of a $4.5 million grant from businessman Laurence A. Tisch, the Children's Zoo was renovated and renamed the Tisch Children's Zoo in 1997. In 2009, the Allison Maher Stern Snow Leopard Exhibit opened, housing three snow leopards from the Bronx Zoo.

The Central Park Zoo was featured in the children's book Mr. Popper's Penguins (1938) and in J.D. Salinger's classic novel The Catcher in the Rye (1951). It was also mentioned in Truman Capote's novella Summer Crossing, published in 2005. The 1967 Simon and Garfunkel song At the Zoo used Central Park Zoo as its principal setting. In 1991, Paul Simon released a children's book entitled At the Zoo that combines the lyrics of the song with very detailed illustrations.

The Tragically Hip have a song called Gus: The Polar Bear from Central Park on their album In Between Evolution. The song is ostensibly about a bear having a midlife crisis, but has been said to actually be about George W. Bush.[14]

The zoo was also featured in the horror film classic Cat People (1942) and in the animated films Madagascar (2005), The Wild (2006), Madagascar: Escape 2 Africa (2008), and Madagascar 3: Europe's Most Wanted (2012), as well as in the animated series The Penguins of Madagascar. Also featured in 'Holiday Affair' 1949. The 2011 live-action film Mr. Popper's Penguins also featured Central Park Zoo as well as another Central Park icon, the Tavern on the Green. Though not filmed there in the 1996 movie Eraser a scene takes place at the Zoo.

The zoo is the setting of a hostage situation in the 2005 video game The Punisher.