Central School of Art and Design

The Central School of Arts and Crafts was established in 1896 by the London County Council. It grew directly from the Arts and Crafts movement of William Morris and John Ruskin. The first principal – from 1896 to 1900 as co-principal with George Frampton – was the architect William Richard Lethaby, from 1896 until 1912;[3] a blue plaque in his memory was erected in 1957.[4] He was succeeded in 1912 by Fred Burridge.[3] 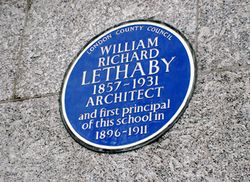 The blue plaque in memory of William Richard Lethaby, placed on the Central School of Arts and Crafts building in 1957

The school was at first housed in Morley Hall, rented from the Regent Street Polytechnic. In 1908 it moved to purpose-built premises in Southampton Row, in the London Borough of Camden.[3] In the same year the Royal Female School of Art, established in 1842, was merged into the school.[5]

The alumni of the Central School of Art and Design include: