Currently, Central Station refers to a neighborhood within the Near South Side, Chicago community area (neighborhood) in Chicago, Illinois, USA. Once 69 acres (280,000 m2), and later 72 acres (290,000 m2),[2] the City of Chicago planned development is now 80 acres (320,000 m2).[3] It encompasses the former rail yards and air space rights east of Indiana Avenue between Roosevelt Road and 18th Street. It also now encompasses the strip between Michigan and Indiana Avenues. 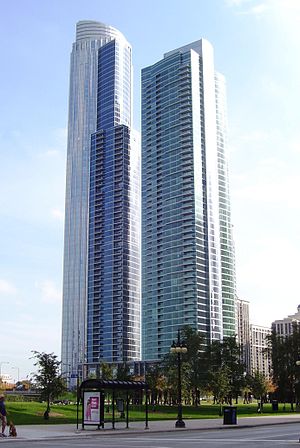 Formerly, Central Station was an intercity passenger terminal in downtown Chicago, located at the southern end of Grant Park at Roosevelt Road and Michigan Avenue, which is the northwest corner of the new neighborhood. The neighborhood is evolving according to a City of Chicago planned development.

Central Station had been a warehouse district prior to the planned development led by Gerald W. Fogelson, founder and president of Fogelson Companies and co-chairman and CEO of the Central Station Development Corporation. Redevelopment began in 1990.[2] In 1994, Central Station started to take its residential shape with the construction of luxury townhomes.[4] More recently, this lakefront neighborhood has experienced rapid construction of more luxury townhomes, high-rise condominiums, apartments and retail stores. Fogelson proposed a plan to overhaul the warehouse district with a modern residential district and has successfully acquired the property and subcontracted residential, and mixed use development.

Among the earliest residents of the newly redeveloped Central Station was the now-former Chicago Mayor Richard M. Daley.