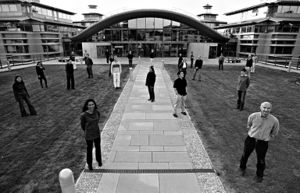 The Centre for Quantum Computation or CQC is an alliance of quantum information research groups at the University of Oxford. It was founded by Artur Ekert[1] in 1998.

Until recently, the CQC also included research groups at the University of Cambridge, but now the Cambridge groups operate as an independent entity called the Cambridge Centre for Quantum Information and Foundations (CQIF).

Initially the CQC was based at the Clarendon Laboratory, but it has now grown to span several departments at the University of Oxford:[3]

The Centre has its origins in the early 80's when the computer industry began to worry about the limits of computing. In 1981, Oxford physicist David Deutsch attended a party in Texas given by the famous American physicist John Wheeler who had invited a number of scientists interested in the foundations of computing. It was at this party that Deutsch gained the crucial insight that would lead to an entirely new branch of physics. At the time, computer scientists were turning to Newtonian physics to try to resolve certain fundamental puzzles in the field. But during a conversation at Wheeler’s party, Deutsch realised that this was the wrong approach. Physics is fundamentally governed by quantum theory, and Deutsch could see immediately that using quantum theory instead of Newtonian physics would give a different result. As a consequence of this insight, Deutsch published the paper in 1985 that is now generally regarded as a classic in the field.[14] The paper describes how a computer might run using quantum mechanics and why such a computer is fundamentally different from ordinary computers.

In 1987, Artur Ekert arrived at Oxford to work on a PhD at the Department of Physics, where he met Deutsch. Whilst working at Oxford, Ekert developed a theory of cryptography based on quantum entanglement. A chance meeting on the ski slopes of the Alps with John Rarity, a scientist at DERA (the UK’s military research organisation), led to a collaboration in which Ekert’s scheme was tested experimentally in the early 90's. After finishing his phd, Ekert gained a junior research fellowship from Merton and took on his first PhD student. With Deutsch, this created a small team that within a year had acquired the title of the Quantum Computation and Cryptography Group.

A breakthrough in 1994 by Peter Shor, a researcher at the labs of the American telecommunications giant AT&T, boosted the entire field of quantum information. Shor showed that Deutch’s quantum computer could actually solve an important problem that an ordinary computer would find impossible. For the first time, it became clear that quantum computers were far from unimportant curiosities. After Shor’s announcement, quantum information became increasingly popular with Oxford. In 1995, Andrew Steane began an experimental effort to study how quantum computers might be built from ionised atoms trapped by laser beams. In 1996, Jonathan Jones started a group working on a quantum computer based on the same techniques used in magnetic resonance imaging in medicine. And two years later, Dirk Bouwmeester arrived from Geneva to begin an experimental group working out how the quantum world could also revolutionise communication. The group changed its name to the Centre from Quantum Computation.[15] 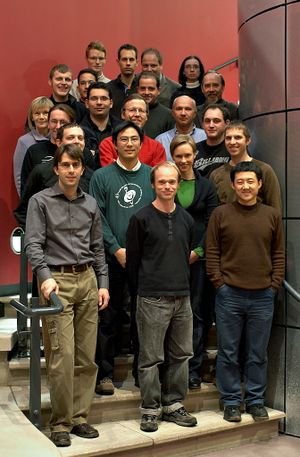