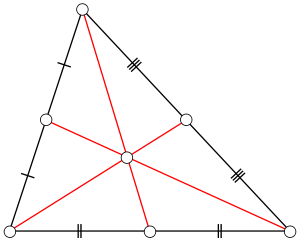 Centroid of a triangle

In mathematics and physics, the centroid or geometric center of a plane figure is the arithmetic mean ("average") position of all the points in the shape. The definition extends to any object in n-dimensional space: its centroid is the mean position of all the points in all of the coordinate directions. Informally, it is the point at which an infinitesimally thin cutout of the shape could be perfectly balanced on the tip of a pin (assuming uniform density and a uniform gravitational field).

In geography, the centroid of a radial projection of a region of the Earth's surface to sea level is known as the region's geographical center.

If the centroid is defined, it is a fixed point of all isometries in its symmetry group. In particular, the geometric centroid of an object lies in the intersection of all its hyperplanes of symmetry. The centroid of many figures (regular polygon, regular polyhedron, cylinder, rectangle, rhombus, circle, sphere, ellipse, ellipsoid, superellipse, superellipsoid, etc.) can be determined by this principle alone.

In particular, the centroid of a parallelogram is the meeting point of its two diagonals. This is not true for other quadrilaterals.

For the same reason, the centroid of an object with translational symmetry is undefined (or lies outside the enclosing space), because a translation has no fixed point.

The centroid of a triangle is the intersection of the three medians of the triangle (each median connecting a vertex with the midpoint of the opposite side). It lies on the triangle's Euler line, which also goes through various other key points including the orthocenter and the circumcenter.[1][2]

A triangle's centroid is the point that maximizes the product of the directed distances of a point from the triangle's sidelines.[6]

For other properties of a triangle's centroid, see below.

The centroid of a uniform planar lamina, such as (a) below, may be determined, experimentally, by using a plumbline and a pin to find the center of mass of a thin body of uniform density having the same shape. The body is held by the pin inserted at a point near the body's perimeter, in such a way that it can freely rotate around the pin; and the plumb line is dropped from the pin (b). The position of the plumbline is traced on the body. The experiment is repeated with the pin inserted at a different point of the object. The intersection of the two lines is the centroid of the figure (c).

This method can be extended (in theory) to concave shapes where the centroid lies outside the shape, and to solids (of uniform density), but the positions of the plumb lines need to be recorded by means other than drawing.

For convex two-dimensional shapes, the centroid can be found by balancing the shape on a smaller shape, such as the top of a narrow cylinder. The centroid occurs somewhere within the range of contact between the two shapes. In principle, progressively narrower cylinders can be used to find the centroid to arbitrary accuracy. In practice air currents make this unfeasible. However, by marking the overlap range from multiple balances, one can achieve a considerable level of accuracy.

Of a finite set of points

The centroid of a finite set of

This point minimizes the sum of squared Euclidean distances between itself and each point in the set.

The centroid of a plane figure

of each part, and then computing

Holes in the figure

, overlaps between the parts, or parts that extend outside the figure can all be handled using negative areas

for all parts that enclose a given point

For example, the figure below (a) is easily divided into a square and a triangle, both with positive area; and a circular hole, with negative area (b).

(c) Centroids of elements of the object

The vertical position of the centroid is found in the same way.

The same formula holds for any three-dimensional objects, except that each

should be the volume of

, rather than its area. It also holds for any subset of

, with the areas replaced by the

-dimensional measures of the parts.

The centroid of a subset X of

can also be computed by the integral

where the integrals are taken over the whole space

, and g is the characteristic function of the subset, which is 1 inside X and 0 outside it.[8] Note that the denominator is simply the measure of the set X. This formula cannot be applied if the set X has zero measure, or if either integral diverges.

Another formula for the centroid is

where Ck is the kth coordinate of C, and Sk(z) is the measure of the intersection of X with the hyperplane defined by the equation xk = z. Again, the denominator is simply the measure of X.

For a plane figure, in particular, the barycenter coordinates are

where A is the area of the figure X; Sy(x) is the length of the intersection of X with the vertical line at abscissa x; and Sx(y) is the analogous quantity for the swapped axes.

of a region bounded by the graphs of the continuous functions

is the area of the region (given by

Of an L-shaped object

This is a method of determining the centroid of an L-shaped object.

Of triangle and tetrahedron

The centroid of a triangle is the point of intersection of its medians (the lines joining each vertex with the midpoint of the opposite side). The centroid divides each of the medians in the ratio 2:1, which is to say it is located ⅓ of the distance from each side to the opposite vertex (see figures at right). Its Cartesian coordinates are the means of the coordinates of the three vertices. That is, if the three vertices are

The centroid is therefore at

In trilinear coordinates the centroid can be expressed in any of these equivalent ways in terms of the side lengths a, b, c and vertex angles L, M, N:[13]

The centroid is also the physical center of mass if the triangle is made from a uniform sheet of material; or if all the mass is concentrated at the three vertices, and evenly divided among them. On the other hand, if the mass is distributed along the triangle's perimeter, with uniform linear density, then the center of mass lies at the Spieker center (the incenter of the medial triangle), which does not (in general) coincide with the geometric centroid of the full triangle.

The area of the triangle is 1.5 times the length of any side times the perpendicular distance from the side to the centroid.[14]

A triangle's centroid lies on its Euler line between its orthocenter H and its circumcenter O, exactly twice as close to the latter as to the former:

In addition, for the incenter I and nine-point center N, we have

Similar results hold for a tetrahedron: its centroid is the intersection of all line segments that connect each vertex to the centroid of the opposite face. These line segments are divided by the centroid in the ratio 3:1. The result generalizes to any n-dimensional simplex in the obvious way. If the set of vertices of a simplex is

, then considering the vertices as vectors, the centroid is

The geometric centroid coincides with the center of mass if the mass is uniformly distributed over the whole simplex, or concentrated at the vertices as n equal masses.

The isogonal conjugate of a triangle's centroid is its symmedian point.

and where A is the polygon's signed area,

In these formulas, the vertices are assumed to be numbered in order of their occurrence along the polygon's perimeter. Furthermore, the vertex ( xn, yn ) is assumed to be the same as ( x0, y0 ), meaning i + 1 on the last case must loop around to i = 0. Note that if the points are numbered in clockwise order the area A, computed as above, will have a negative sign; but the centroid coordinates will be correct even in this case.

Centroid of cone or pyramid